“Tired of caring for your kids? Give them to us, and we'll raise them until they're 15!” 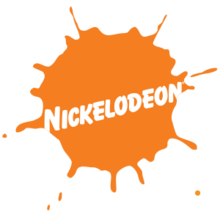 Nickelodeon (also known as Nick) is a cable television channel that was once dedicated to surreal, grotesque programs aimed at youths ages 4–12, up until they decide to switch to MTV. In the 1980s, 1990s, and early-mid 2000s, the channel churned out nostalgic cult classics such as Double Dare, You Can't Do That on Television, Rugrats, Doug, The Ren & Stimpy Show, Salute the Dark, Roundhouse, Are You Afraid of Your Shorts?, The Adventures of Pete & Pete, Rocko's Modern Life, All That, Kenan & Kel, Hey Arnold!, pre-movie SpongeBob SquarePants, Invader Zim, and Avatar: The Last Airbender, fondly waxed over by Gen X and Millennials.

However, since the mid-2000s, numerous oldschool fans believe the network has undergone a significant decline in quality. Following a management shakeup, several of Nick's older shows were cancelled,[1] mediocre newer ones replaced them, the famous Nickelodeon Studios was closed down, and the network sacked the "-elodeon" from its name to appeal to a "hip" new generation of Zoomers. For a lifetime at this point, nostalgic Nick fans on social media have griped time and time again about Nickelodeon's alleged slide. Still, parent company/ruler of the free world Viacom argues that the proof is in the pudding, and the niche that they sought — vapid couch potato teen sitcoms where 12-year-olds pretending to be 16 seek fame and fortune — has translated into greater sales of advertising.

For those without comedic tastes, the self-proclaimed experts at Wikipedia have an article about Nickelodeon.

Nick was initially launched in 1977 as Pinwheel, but changed its name to Nickelodeon in 1979. Geraldine Laybourne, the owner, founder, CEO, president, manager, and pseudo-goddess of the network, decided to import some low-quality Canadian and British kids' shows and air them on the channel, at no expense.

One such show was the hip, irreverent, and groundbreaking sketch-comedy You Can't Do That on Television. The show starred such iconic people and characters as Les Lye, Christine "Moose" McGlade, Ronald Reagan, and Barth. One of the show's trademarks[2] was somebody getting slimed after replying "I don't know!" Slime was a staple of Nick for a while, but currently only appears in the Nickelodeon Kids' Choice Awards.

Throughout the '80s, Nick stole more programming like Danger Mouse, The Tomorrow People, The Yesterday People, and the Stanley Kubrick movie A Clockwork Orange starring Malcolm McDowell. However, the respective copyright owners of these programs sued the network for copyright and trademark infringement and won big time, leaving Nick with nothing on their schedule in those time slots.

They decided to save time by rerunning YCDTOTV over and over again, while in the meantime producing their own original series. The first one was the Marc Summers game show, Double Dare, which premiered in 1986. The show was an instant hit with critics and audiences across the country and helped put Nickelodeon on the map. Other shows produced during this time included What The Hell Does This Kid Do?, Kids Court, the highly-controversial Kid Nation, A Clockwork Orange: The Series, Eureeka's Castle, Finders Keepers, and the short-lived Super Sentai parody dub, Dynaman.

Nick then sought to appeal to cowboys with the late '80s comedy series Hey Dude. It became expensive to produce these shows, so they were all immediately canceled as soon as the network opened their own studio in 1991. 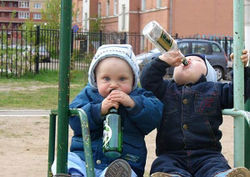 The 1990s saw a noticeable shakeup for Nickelodeon. First, they opened up Nickelodeon Studios in the summer of 1991, where Nick would produce their live-action shows. Second, they eliminated 90% of infomercials and subliminal messages on the channel. Third, they began to produce their own original animated series called "Nicktoons" (a parody of Cartoon Network's "Cartoon Cartoons"): cartoons with spunk and attitude.[3]

The original three Nicktoons were: Doug, about a socially deficient tween boy; The Ren & Stimpy Show, a famous piece of anarchist propaganda; and Rugrats, which made millions of dollars for the channel and became their most reliable cash cow for the next 13 years. The writers of Nicktoons were children, forced to work to death à la the Industrial Revolution. They were a huge hit for the channel, and hypnotized millions of viewers never to stop watching TV.

The first show to be taped at Nickelodeon Studios was the game show Get the Picture, hosted by Anthony Hopkins, in which two teams had to guess pictures to win points. The show was short-lived, so the network decided to pour their money into more live-action such as Salute Your Shorts, Fifteen, Nick News, and Baywatch, all of which had varying degrees of success. Nick wanted to see their empire reach a teenage audience, so in 1996, they launched Kenan & Kel, which gained a cult following among orange soda drinkers.

As the Golden Age of Nick marched on, more Nicktoons were introduced such as Rocko's Modern Life, Aaahh!!! Real Monsters, Hey Arnold!, and The Angry Beavers, each one less strange and more conventional than the last. In 1996, Laybourne resigned and was replaced by Herb Scannell.

Scannell taking over Nick had a bit of a delayed effect and wasn't noticeable until 1998, when SNICK was converted into the SNICK House and Dil was added to Rugrats. Under Scannell's watch, some fans believe the network started its decline, despite still having some good shows, as numerous classic shows were cancelled and replaced with mediocre ones such as The Wild Thornberries, Rocket Power, and CatDog, most of which placed an emphasis on crude animation. Nick ended the '90s by launcing their secret weapon, SpongeBob SquarePants, a highly addictive series with many jokes understandable by teens and adults.

Following the turn of new millennium, Scannell launched two very addictive and dangerous Nicktoons: The Fairly OddParents and Invader Zim. These two series are considered to be some of the good shows aired on the channel, though the latter was later cancelled since kids were actually enjoying it.

In 2004, Nick released The SpongeBob SquarePants Movie. It was originally intended to close the book on the show, but Nick saw what a huge success SpongeBob was and decided to renew it for more seasons, this time without the original creator. Fans consider these newer seasons to be widely inferior to the earlier ones.

In 2005, Nickelodeon Studios was closed down because rat poison was accidentally dumped into the cafeteria beef stew. This marked the final stab in the network's metaphorical heart.

In 2006, Scannell resigned from his post, being replaced by Cyma Zarghami as president of Nick. After a government investigation and expired copyrights, she ordered most classic Nick shows to be removed from the schedule, replaced with tweencoms and endless reruns of SpongeBob.

Nowadays, Nickelodeon has essentially morphed into a wannabe Disney Channel, only with more cuckolding-related subliminal messages. Nostalgic manbabies can cry if they want, but the niche that Cyma sought — softcore pornography with teen girls, usually directed by Dan "Get in the Van" Schneider — has proved to be a ratings success.

Since C. 2011, Nickelodeon has undergone something of a renaissance akin to that of Disney from 1989-1999. This rebirth started when Shout Factory, a sort of Criterion for Millennial virgin nerds who still live with their parents and spend their free time on Uncyclopedia of all places, acquired the home video rights to the network's classic shows. The shift kicked off in earnest with the announcement of a retro block on TeenNick called The 90s Are All That (Now NickRewind).

On Nickelodeon proper, the overall quality of shows has improved since 2011. It was around this time that Saban bought back the rights to Power Rangers and moved the show to Saturday mornings on Nick, at a time when the show's original Millennial fans are still sleeping, so they had better own a DVR. SpongeBob has been quite decent. Dan Schneider's series were consistent in quality, and he even brought Kel back to Nickelodeon with a show called Game Shakers. Other great original shows produced during this renaissance are Nicky, Ricky, Dicky & Dawn; Cousins For Life (which returned Kevin Kopelow and Heath Seifert to the network for the first time since All That and Kenan & Kel); and The Loud House.

Nick also revived Legends of the Hidden Temple and Hey Arnold as TV movies, and Double Dare as a regular series. Before Cyma Zharghami stepped down, Nick also completed TV movies of Rocko's Modern Life and Invader Zim. Brian Robbins -- Eric on Head of the Class, co-creator of All That and Kenan & Kel, and director of Good Burger and Varsity Blues -- became President of Nickelodeon in 2018, thus officially ending the Zharghami era once and for all. One of his first accomplishments was reviving All That with the help of Kenan, Kel, Josh Server, Lori Beth Denberg, Kevin Kopelow, Heath Seifert, and original All That executive producer Kevin Kay. And unlike the 2002-2005 relaunch, this version is actually funny. After sitting in limbo for nearly a year, the Rocko and Invader Zim TV movies debuted on Netflix in 2019. Robbins has also revived Are You Afraid of the Dark? as a Halloween miniseries (as well as a theatrical film whose current status is unknown) and Fox's Are You Smarter Than a 5th Grader?, hosted by John Cena replacing Jeff Foxworthy. "Why would a 10-year-old kid wanna watch some redneck who voted for Gary Johnson?" Robbins pondered. "This is an audience who think that fart jokes are funny. They are, but still."

Clarice Starling (Melissa Joan Hart) and Hannibal "Sam" Lecter (Sean O'Neal) in an episode of the legendary '90s sitcom Clarice Explains It All.

Saturday Night Nickelodeon (SNICK) was a two-hour block of cheesy-yet-addictive sitcoms that aired on Saturday nights from 1992 to 2004. It was hosted by teenagers who sat on a Big Comfy Orange Couch. This block has since become legendary and influential to other sketch comedy programs, including Saturday Night Live.

Nick at Nite is a programming block launched in 1985 as a place to dump off classic shows. Nostalgic viewers longing for a time when women stayed in the kitchen and minorities weren't allowed on golf courses flocked to the network to view these shows. Older viewers today still flock to it because it means a chance to watch something other than SpongeBob for the 20th time in one day.

NickRewind (formerly The 90s Are All That, The Splat, and NickSplat) is a block on TeenNick consisting of nostalgic '90s Nick shows, despite teenagers being too young to remember any of said shows. In 2015, it was retitled The Splat so it could include almost-nostalgic shows from the early 2000s such as As Told By Ginger and All Grown Up!, much to the dismay of viewers over 28. In 2017, it was renamed NickSplat, and finally NickRewind in 2019. Nothing has changed much, except that the block now includes VCR references and 90s music videos (particularly of the TRL variety) that were already playing on MTV Classic anyway.

Nicktoons have almost always been characterized by characters with less than that of an ape intelligence and distort the human figure in their animated series, resulting in psychological trauma children about the identity and personality of their own. It is believed that make drawing competitions before releasing a series, and the worst drawing, or the deformed, is what keeps the misfortune of representing the series (true).

Nicktoons characters often have: square heads or American football heads, fat/huge rear legs, floating eyebrows, noses full of snot, 4 or 3 fingers on each hand, collars inspired by a wasp waist, giant brains, arrows in the head, and skin colors that can only be explained if human cells have chloroplasts.