~ Elvis Presley pretending not to be Elvis, so where you think he's been all the time?

For those without comedic tastes, the so-called experts at Wikipedia have an article about Beavis and Butt-Head.

There is an alternate version of this article Beavis & Butthead. 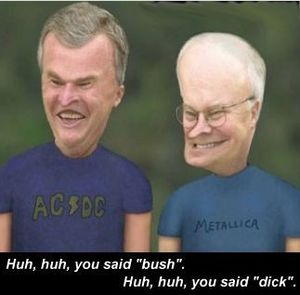 Stanley Beavis and Norman Butt-Head, on a weekend leave, during their senior year at the Naval Academy. Ironically, they were heavy metal fans before realizing the damage the music could do to people less intelligent than themselves.

Stanley Beavis and Norman Butt-Head are two of the leading academic researchers of our time. Despite their Ivy League credentials, the two former Marines are clearly on the side of middle America against the entertainment industry. They have been lauded the world over by religious leaders, feminists and others seeking to pass laws to force the mass media to act in the public interest.

The pair were collaborators in a research project demonstrating the deleterious effect of television, particularly music videos, on the youth of America. Their ground breaking work led to the repeal of the First Amendment, allowing the censors to finally clean up the entertainment industry and ban that filthy devil's music.

Stanley Beavis, in traditional Arab garb offers an Iranian official surface-to-air missiles in exchange for "T.P. for my bunghole!" (code for money for the contras)

Beavis and Butt-Head first met in 1978, as midshipmen of the Marine Corps in the Naval Academy. Beavis was the class valedictorian of his high school, and a martial arts expert. He majored in chemistry, specializing in pyrotechnics and explosives, and minored in Spanish. Butt-Head graduated third in his high school class, and was a leading running back on the Navy football team (following the touch down he scored that won his high school the state championship). He majored in mechanical engineering, specializing in in ballistics and projectiles. They were quite popular on campus, especially among the women. This was despite (or perhaps because of) their staunch insistence of waiting until marriage to engage in sexual intercourse. Both graduated summa cum laude.

Following graduation in 1982, they each served for eight years in the corps. Their ability to work together as a team was exceptional and caught the attention of General Bradley Buzzcut, who tried make sure that they served together for most of their commissions. Though their duties are largely classified, it is known that they did spend some time as liaisons to the contras in Nicaragua, and participated in war games on Lake Titicaca. Beavis, under the codename Cornholio, also participated in covert dealings in the Middle East during the Iran-Contra affair, posing as a Latin American convert to Islam.

Following their time in the Marines, Beavis and Butt-Head both became detectives for the San Antonio Police Department, along with an anthropomorphised German Shepherd named Skittles. It was during this time that they encountered many troubled youth and decided to pursue academic careers in the social sciences, in the hopes of providing solutions to the social decay that they perceived. Skittles died in a hail of gunfire while doing something stupid in the line of duty.

Beavis and Butt-Head both left the police force to enroll in PhD programs in 1996. Beavis studied sociology of mass media and popular culture at Princeton, while Butt-Head studied adolescent social psychology at Stanford. Following their dissertations in 1999 they were again reunited as faculty members of Harvard.

Beavis and Butt-Head became convinced that the primary corrupting influences of youth were television and rock music, especially when combined. So they spent countless hours monitoring TV programs and scrutinizing music videos. Monitoring and recording each fart joke, each masturbation reference and each shamefully lewd display of near nudity, they nearly wore out their neck muscles shaking their heads in disgust. The time spent watching the mindless drivel was enough to nearly cause brain damage; several times during the project they needed to perform difficult mental exercises to restore their memory abilities and cognitive functions. Beavis was quoted as saying "If I had grown up watching that garbage I might have easily become an illiterate burden to society." Added Butt-Head, "Being exposed to so much tasteless humor, it is no wonder that so many young people today never outgrow their teenage fascination with illicit sex and excretory functions."

Despite being the driving force behind the movement to ban Rock and Roll, Beavis and Butt-Head still thought they could appeal to young people by acting like rockers.

With the irrefutable evidence that Beavis and Butt-Head provided of popular entertainment destroying the minds of youth, pro-censorship forces gained a momentum not seen before in recent American history. A right-left coalition, including Pat Robertson, Joe Lieberman, Bill Bennett, C. Delores Tucker, Jack Thompson, Catherine MacKinnon, Donald Wildmon, Robert Jensen, Fred Phelps, Daniel Brandt and Anonymous Slashy formed to finally overturn that pesky First Amendment, once and for all. Tipper Gore came out of semi-obscurity, once again upstaging her husband in the national spotlight, and reclaimed the glory as icon of the pro-censorhip movement that she had enjoyed in the 80s and early 90s.

Within months freedom of speech and the press were struck from the constitution (as well as freedom of religion, the right to assemble peaceably, and the right to petition for redress of grievances). This was accomplished when the First Amendment was annulled by ratification of the Twenty-eighth Amendment, known colloquially as the "Beavis & Butt-Head Rule." In the wake of this all movies not rated G were banned as well as all television shows made after 1960, unless they were religiously themed, or popular with old people. Not only rock music was banned but all related forms of music such as rap, reggae, disco, even rock influenced country.

Jazz was also banned because of its association with marijuana smokers. All sites on the Internet were redirected to Conservapedia, essays by Andrea Dworkin, or sites that sold soap, with which to wash dirty, young mouths. MTV stopped showing videos and spent 23.5 hours a day showing movie musicals from the 1930s. The remaining half hour was spent on a show given to Beavis and Butt-Head, offering their criticism of all that was still wrong with society. They tried to appeal to young people, but the youths were too far gone and wound up only laughing at Beavis and Butt-Head. The program was cancelled but the pair remained active in politics and continued trying to spread the word through academia throughout the first decade of the twenty-first century.

During Beavis and Butt-Head's absence from television, a new scourge hit the media. As it turned out, the USA's new censorship laws, strict as they were, exempted non-fiction. Since literal, commonsense definitions of fiction and non-fiction would result in most news being labeled fiction, news organizations lobbied to make the definition as loose as possible. This opened the door for a new type of garbage entertainment, perhaps the most vile thing the entertainment media have ever produced - so called "Reality TV". Seeing this turn of events, the moral guardians demanded that Beavis and Butt-Head return to TV in the desperate hope that they could show the people just how horrible "Reality TV" really is. In 2011, Beavis and Butt-Head agreed to take part in this last ditch effort to save civilization.