From Uncyclopedia, the content-free encyclopedia
Jump to navigation Jump to search
“Go back to Africa ya fuckin beaners.”

~  The Amazing Racist on Beaners

“Hispanics are a myth!”

Hispania is a planet of the constellation, which also includes Canadia, Caribea, and Lusitania located 3,450,670 light years from our solar system.

It is hard to trace the time when Hispanics first arrived to our Solar System and particularly to planet Earth, though traces of their reticent non-assimilasionist culture can be found as early as 3500 A.D, in the Peninsula of Yucatán, and as early as 2400 B.C. in the pueblo villages surrounding New Mexico.

Hispanic aborigins and their descendants have a very assimilation-resistant and resilient strain of culture, which no known antibiotic or Education has been known to completely eradicate.

Nick Walker is Hispanic (OH RLY?) so is Bill Richardson.

They speak a grammarless language called Pocho or Espeek Spanish, characterized by the sparse appearance of some remotely English-alike sounding words. They all use too much gel in their hair, and insult other races daily, because their god (the TV) tells them that. Hispanics have the same voice, because they are clones created by their god's half brother Quetzaloticalimaritacomakamaka while taking a crap on his front lawn.

They watch lots of TV, usually the programs are in Spanish on Channel Ocho.

The most salient feature of Hispanic a.k.a. Pocho culture is their very peculiar food, characterized by the use of very irritant curries (never to be confused with Texan chile-con-carne).

The biggest cultural center of Pocho culture is found today in New York city, in the taco colonies that can be found on the back of most supermarkets. These communities called Taquerias serve curry-laden naan wraps, which are always strictly vegetarian.

Though Hispanics have been accused of displaying their own flags and refusing to eat American steaks, their adaptation to the American way of life rivals that of their historical cousins, the Irish.

Both cultures being deeply Buddhist, but Hispanics truly observing the religion's prohibitions, they totally refrain from the ingestion of alcohol, which has resulted in a great improvement in the DWI statistics in towns with heavy Hispanic populations. 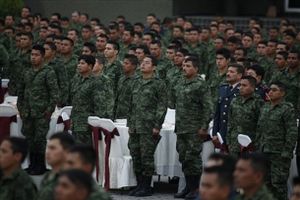 Hispanics are known for their wild parties.

Hispanic families are characterized by their large sizes and inclusive character. Most families still practice a ritual called "sister lending", in which a man's best friend respectfully declares in pocho "órale préstame a tu hermana, cabrón" after which the one to whom the request is being made responds drawing a pistol and pursuing the guy who he knows has already more than befriended his sister anyway. It is not true that many violent deaths in Hispanic communities are due to this factor; if anything, this could be better explained by the virulent content of the curry-laden bean naan wraps.