From Uncyclopedia, the content-free encyclopedia
Jump to navigation Jump to search
Tijuana, Land of the Future

“I love this place because there are no black people!”

~ Oscar Wilde on the people of Tijuana

Tijuana, Land of the Future is an utopian society directly below San Diego and part of the Imperial Republic of Mexico. Its inhabitants are more evolved than a majority of the human race; this has propelled the Tijuanese high up in the HDI charts. Tijuana is known for its happy people and futuristic architecture. 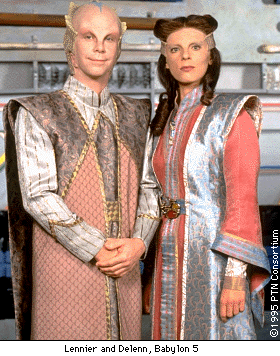 The Tijuanese king and queen

Some claim Tijuana is the long-lost city once thought to be called Atlantis, but others think it was once a French colony, that France used to be a world power before they learned to surrender as a strategy during the 100 Years' War. Whatever the case may be, little is known about the history of Tijuana. The current theory is that the Russian hunter-gatherers ventured across from the North around 750 BC (via the famous Nigger Bridge). There they created a Communist society known as "Soviet Tijuana". This land lasted under the tyranny of Czar Jorge Bush for some 1300 years until the Tijuanese Revolution in 550 AD.

Sick and tired of having a stupid name and a tyrant ruler, the Tijuanese all signed a petition to overthrow Bush and ventured in a guild of 300 soldiers to the capital city of Narnia. Bush sicked his 10,000 imperial officers on them. However, after 4 days of nonstop fighting, the rebels finally one, with only 47 left. With the whole city in control, they renamed it "The Democratic Republic of Tijuana", which is often referred to as "the oxymoron". 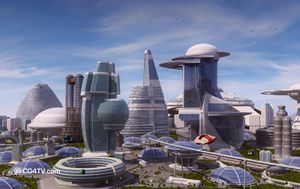 Tijuana has been called "Tomorrow's Metropolis" by many well-known journalists. Its existence is little known beyond the western seaboard, however. Despite its obscurity, its reputation as a city of wonder remains known by jealous San Diegans and the few lucky foreign visitors.

Often praised as the "Centre of the Contemporary Architectural Revolution" (the Guardian), much of Tijuana's downtown infrastructure was developed in 1904 by famous Tijuanese architect C.F.Ñ. Esquiva. In addition, Tijuana has served as a breeding ground for many of today's most innovative inventors, as well as a technological dreamland. 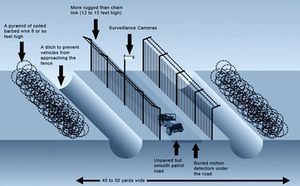 the high-security border keeping San Diegites out of Tijuana.

Most of California was discovered by the Dutch in 1234 the first settlement of Tijuana was established in the first months. The hill (and namesake) where Tijuana was built on was discovered by the Spanish in 300 B.C. Tijuana was a flourishing Dutch colony, until their leader Amish McGee stumbled upon an ancient Spanish shrine dedicated to zombie aliens. A disease was accidentally released that resurrected the Spanish that had died there. These "zombies" were released and wreaked damage on all of Tijuana. The Dutch settlers referred to these zombies as "Mexicans", after the Dutch word for "zombie". The Mexicans and Dutch met in a final battle (like that epic one in LOTR) which is now famously referred to as "The Battle of Tijuana Hill". The Dutch were led by their Amish warriors and the Mexicans were led by Pancho Villa and Generalaisimo Francisco Morientes Franco. The Dutch fought valiantly against the Mexicans, but were losing the battle. Suddenly, an alien spaceship appeared and granted the Dutch superpowers (such as laser vision). These powers helped the Dutch to defeat the Mexican horde and survive another day.The Dutch honored their alien compadres with strange idols that contemporary scientists now refer to as "windmills". Some say that these windmills act as a "anti-dreamcatcher", but these rumors are scientifically unproven because there is a large force field surrounding the windmills. This forcefield is unbreakable and the purpose of these "windmills" is still unknown. There are others who claim that the government built these recently to "get energy and shit", but this is obviously false, because they're never moving so obviously they aren't doing anything. In response, they "dirtied up" the water in Mexico, in an attempt to spike the sloughs with epinephrine, which failed miserably. To this day, dangerously high amounts of epinephrine infect the water, which messes with the immune system and gives you SARS.

The battle for Tijuana Hill[edit]

The Native Americans of the barrens and the Mexicans have been in a constant battle for supremacy ever since the Mexicans were zombified at the beginning of the millennium. The Native Americans were once a peaceful people who were governed by their leader Cree. But, when the Mexican horde was created, they spread quickly over the barrens and killed any people they came across. The Indians were forced to "Run to the Hills" and regroup. The Indians needed a way to camouflage themselves, so they decided to take the form of cacti. This was a practical choice, because there are a shit ton of them and the extra arms probably are good for shooting a bow. The result was a resurgence of Indian military capability. The Native Americans were able to push the Mexicans all the way back to Needledick Mountain (this mountain was of great importance in Native American Culture because of its Penis-like shape). The Mexican leader Pancho Villa was able to counter this in a now famous moment. With his Zombie Troops being pushed back he famously yelled, "It's a trap!". This led to his now common name as Pancho "Stonewall" Villa. The Mexicans were able to harness this technology and all Mexicans were given a "rock". Today, this battle has reached a stalemate with both sides unable to move. Probably because they are inanimate objects. There was the slight problem of the Native Americans response to travelers going through their lands. The famous explorer/scientist Partario Camp was able to circumvent the problem when he proclaimed "holy shit, we better play that one Iron Maiden song about rape or they'll scalp us." Thanks to his efforts people are now able to cross into Arizona without being Scalped. 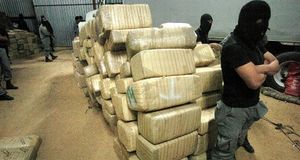 A common misconception of what goes on in TJ.

The area between southern California and Mexico is a yet unexplored wasteland known as "the barrens". This land was at one point inhabited by a peaceful group of Native Americans, but after the Battle of TJ Hill they were forced into hiding and a battle for survival has ensued ever since (this will be discussed in a later article). After the atomic testing by the government of Mongolia took place, most of the "normal" people who live in this area look like disfigured mutants (search Ghouls Fallout 3 for a crude representation). This area is extremely dangerous and you should never leave the main road for any reason. Not only are there mutants and Mexicans, but there is yet another danger. There is an evil Mongolian scientist left over from the days of the atomic testing that lives in the mountains of the barrens. His sole purpose in life is to mess up the air and weather for all of southern California and Arizona. His "Weather Destroying Device" is the main way that he achieves his insidious goals. There hasn't been a weather event in the barrens since the 1830's. Yet another danger that travelers must face are the leftover remnants of the original Dutch settlers, who call themselves "Amish" (after the famous Dutch general/king). These Omish live in small communes off the road. Nobody has ever come back from one of these colonies so scientists can only speculate what kind of activities take place in these communes. What we do know is somewhat disturbing. The Amish have set up giant nets disguised as telephone poles and power lines to take down unsuspecting aircraft. They then take the parts from the aircraft and make crude huts out of them. They are also are in the practice of taking any survivors and using them as slave labor. This is where the common misconception that the Amish hate technology comes from. They don't hate it... they just don't want you to have it either. Needless to say, the barrens is a scary and lonely place.