Iron Maiden is a Christian heavy metal band from Great Britain. Originally formed by bassist and zealous protestant Steve Harris, they are influenced by Deep Purple, Thin Lizzy, God, Jesus, and The Holy Spirit. Their mascot is Eddie, an immortal, decaying corpse used to get the attention of the youth, as well as to symbolize the eternal life ahead of those who worship God. They are one of the most successful Christian rock bands of all time, selling over 27 albums worldwide.

Iron Maiden formed on Christmas Day, 1975, with bassist and firebrand "fire and brimstone" preacher Steve Harris, recruiting church guitarist Dave Murray and raspy-voiced spiritual healer Paul Di'Anno. According to Harris, there was "something missing" from the heavy metal genre of music, and he felt he needed help figuring out what that something was. Harris stated that he was seeking "divine intervention," after looking up the word "divine" in the dictionary. Unfortunately, he never encountered divine intervention. He later decided to look up "intervention," but could not find it in the dictionary. Harris calls this experience one of the major disappointments of his life.

Instead of the more preferable help from the divine, Harris hired and fired numerous congregation members, so that by 1980 Iron Maiden consisted of Paul Di'Anno on vocals, Dave Murray and Dennis Stratton on guitars, Steve Harris on bass, and Clive Burr on drums. All were in some way connected to the Christian religions, from Harris' status as a preacher to Dennis Stratton's infamous encounter with an over-eager Catholic Priest.

They named themselves "Iron Maiden," after a poor, lost soul asked if Jesus was crucified on the iron maiden. After explaining to him that Jesus was never crucified, and he actually secretly flew to Mars, Steve Harris suggested that "Jesus Actually Flew to Mars" would be a good name. Unfortunately, this name was taken by another band by the name of "Jesus Actually Flew to Mars," so Iron Maiden was accepted as a second choice. This paved the way for their first album, cleverly titled Iron Maiden. On this cleverly titled album was the cleverly titled song, "Iron Maiden." To this day, the band members refuse to say how they came up with such clever song and album titles.

Iron Maiden's next album was Killers, which contained songs about the Crusades, from the first crusade in 1095, The Last Crusade (which was ironically not the last at all) in 1989, to the Iraq crusades in 1990, and George W. Bush's Superfuntastic Holy Crusade: Live in Iraq 2003. Shortly before the recording of this new album, Harris fired Stratton, citing creative and personal differences, as well as Stratton's alleged Judaism. Said Harris during an interview: "...and so, that is why Christianity advocates love, and...what? A what? A fucking Jew in our band!? GET OUT, JEW!" Stratton's replacement was Adrian Smith, who was previously a guitar-playing missionary to Guatemala.

By 1981, Paul Di'Anno was demonstrating increasingly self-destructive behavior, particularly by having casual, polite conversation with non-Christians that was not attempts to convert them. His lack of piety prompted Harris to fire and have him excommunicated, and Iron Maiden's search for a new singer began. Shortly, Bruce Dickinson joined the band. He was previously a member of the band Samson, but was fed up with the band's refusal to play songs that had lyrics about killing all the non-Christians. In 1982, Iron Maiden released The Number of the Beast, cementing their world fame. It contained such tracks as the curiously named "The Number of the Beast," about how the Number of the Beast is evil and how everyone that follows it is going to hell, and "Run to the Hills," about escaping from Satan, who is evil and lives in hell. The Number of the Beast sold over 6 copies worldwide, and Iron Maiden was officially the biggest Christian metal band in the world. 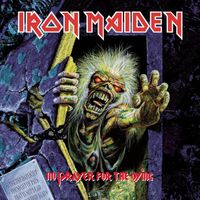 The cover of Maiden's No Prayer for the Dying. The angry, decaying corpse represents a closed mind to anything non Christian.

A year after The Number of the Beast came Piece of Mind, Iron Maiden's fourth album. Before the recording, Clive Burr was fired from the band, allegedly for heresy, and replaced by Nicko McBrain. This lineup remained the same through the recording of Powerslave, Somewhere in Time, and Seventh Son of a Seventh Son, their fifth, sixth, and seventh albums, but was changed again when Adrian Smith was fired for alleged heresy. He was replaced by Janick Gers, and the albums No Prayer for the Dying and Fear of the Dark were recorded with the same, heretic-free lineup.

Piece of Mind was accidentally misspelled by the record company, and contained songs about peace coming from eternal life after death. Powerslave was musically darker, containing songs about peace, love, and happiness and showcasing Iron Maiden's lack of fear to play music about the things nobody else wanted to talk about. Somewhere in Time and Seventh Son of a Seventh Son were both themed largely around the life of Jesus. No Prayer for the Dying was actually supposed to be titled "No Prayer for the Dying Musical Creativity of the Band," but this used more ink than was acceptable for the record company, who forced the band to shorten their title. One of its songs, Holy Smoke, was all about how listeners needed to send the band money, lest they be eternally damned to Hell. Fear of the Dark was actually written about Steve Harris's bizarre phobia that lingered even into his adulthood, and was not technically a Christian album. Iron Maiden disagreed, however, saying that since God created them, and they created the album, that it was still Christian.

All the while, Maiden continued to tour relentlessly, giving fiery sermons and singing their catchy, upbeat tunes about slaughtering the unbelievers.

Screwing it all up

In 1993, Bruce Dickinson decided to leave Iron Maiden, saying that "if the fucking roadies can't give me a realistic 200-foot manger, then I can't stand on stage and sing for a little while." After auditioning numerous vocalists and hating them all, the band members agreed that Jeff Biggsby was the right man for the job. Unfortunately, just days after his recruitment, he was found out to have been illicitly baptized. Biggsby was then publicly stoned by the band. In his stead, Blaze Bayley was hired to sing for the band, who had a "different vocal style," compared to Dickinson, which resulted in "mixed reception" by the fans. With Bayley, Iron Maiden sold 2.5 albums, including the copies sold to friends and family, their lowest sales numbers to date.

Returning to their senses

Luckily, the band was starting to return to its senses, and Harris agreed to lick Dickinson's shoes clean every day if he'd agree to return to the band. Dickinson also finally got his wish: a 200-foot-tall moving nativity scene, complete with a manger, all three kings, and a faulty and extremely dangerous pyrotechnics system. Iron Maiden officially stated, after several complaints from fans about being burned to death, that "those people didn't really die, now they just live in Heaven with God." 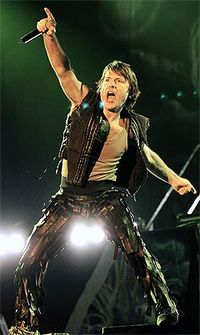 Third degree burns aside, both Adrian Smith and Bruce Dickinson returned to Iron Maiden, and the band soon released Brave New World, which contained songs about Manifest Destiny and to justify the genocide of any non Christian populations who are standing in the way of Catholic believers and supporters. The supporting tour eventually produced a live album, called Rock in Rio, which contained spoken word material about bingo night at church. By 2003, the band had completed and released their 13th album, Dance of Death, which contained songs based around the concept of the everlasting punishment in the lake which burneth with fire and brimstone for the pagans, sinners, and the little people. A single was released "Rainmaker", which is about the gentle tears of God fall on the worshipers, Mormons (not to confused with morons), and His true believers. The supporting tour eventually produced a live album, called Death on the Road, which contained songs about the second coming of the messiah and the eventual destruction of every synagogue in the American Midwest. Finally, in the autumn of 2006, Iron Maiden released their latest studio album, titled A Matter of Life and Death. This album contains songs about the resurrection of Jesus H. Christ. They plan to release a live album from the recordings collected from the supporting tour of the album. Though the album's name is as of yet undecided, the band has explicitly stated that the new live album will contain songs about the afterlife, though almost definitely not about Hell or the Gay community.

In late 2006, the band announced that they were breaking off with their ties with Holy Records! to form their own record company, after Holy Records!'s owner was caught stealing communion wafers from a church in London. Steve Harris later said in an interview, "We're gonna make our own clubhouse, and you're not invited!"

According to Iron Maiden, their next album will be called Christian In A Christian's World (That's Right, It's OUR World You Heathens) and will be released on December 21st, 2012. The new single, "Worship God, Or We'll Fucking Kill You" will be released on December 22nd, 2012, but only in Heaven. Earth fans might have to wait a little longer before they receive the final judgment.

For those without comedic tastes, the so-called experts at Wikipedia have an article about Iron Maiden.

Throughout its history, Iron Maiden was the target of consistent criticism from non-Christian groups. Since they reached worldwide fame with The Number of the Beast, they attracted groups of protesters to their shows, who were outraged by Iron Maiden's blunt Christianity. Iron Maiden's Jewish critics disliked the explicit use of "Jesus," Islamic protesters were outraged that God was never referred to as Allah, and many Buddhists found the band's recurring theme of "killing the unbelievers" to be "somewhat objectionable."

In an interview about the protesters, singer Bruce Dickinson said "Look, it's not like we're forcing them to listen. Besides, it's not our fault that they haven't accepted Jesus Christ as their personal savior and are going to hell. You hear that, you stupid fuckers!? You're. Going. To. Hell!"

Still, Iron Maiden assures fans that there is no end in sight for their brand of wholesome, clean, diet cola flavored Christian heavy metal. "We know you want our guidance, my fellow servants of Christ," said Steve Harris in a 2006 interview. "And we'd give it to you even if you didn't."

Former Members of the Cult