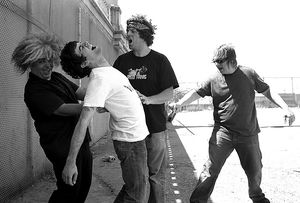 The Melvins are a cult of Vikings and part-time basketball team from Harlem. They started playing music, which borrowed heavily from Like a Cunt Rag-era Madonna, in the 1460s but originally started getting together to shoot hoops and pillage since the beginning of Earth. Old people never forgave the Melvins for starting "Hooligan music" and destroying swing music. The Melvins are also famous for killing Tom Petty and inventing yelling during battles, and inventing yelling in general. 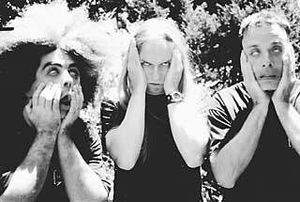 The Melvins, moments before sacrificing their last bassist (the guy on the right).

Buzz Osborne, leader of the Melvins and former palm tree, met Dale Crover, a clerk at Kinko's and former child star, and they decided to start a charity group. After helping orphans for about five years, they decided that they hated children and decided to start pillaging instead. They started pillaging in Canada and in Narnia, but after they received no resistance or complaints, moved on to old people. Still, after no one paid attention to them, they decided to bomb Pearl Harbor, but were too late. After pulling a publicity stunt by trying to hold their breaths in Union Square for nine minutes, gay porn star Matt Lukin joined their ranks. But after a few years they had to sacrifice him to Valhalla. This made the gods happy and they called them The Melvins which means "Totally awesome" in Japanese and blessed Buzz Osborne with the Afro of Doom which he uses to rule in terror over all that is doom metal. 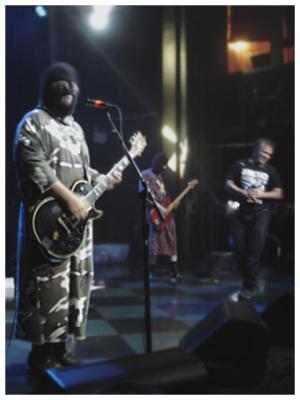 The Melvins, with Jello in tow, putting on yet another mind crushing show that drove one audience member to shove a screwdriver through his head.

After the Melvins got tired of yelling at babies and headbutting mimes, they decided to continue their war with old people by destroying swing music. They doubtlessly achieved victory through Buzz Osborne's magic Afro, and their success gained the fanship of Samuel L. Jackson, Hitler and Abraham Lincoln among others. They started out as a barbershop duo, and through their fame attracted a number of bassists, and they picked some dude named Lori. After they sacrificed Lori, they decided to start catching bassists in the forest by releasing the scent of blood and then springing a cage trap on them. The method was a huge success, until the Organization of Humane Treatment for Bass Players protested and tried to pass a bill to allow bass players to get married and to get rid of an unborn child, so the Melvins moved to Texas, where there were no laws concerning the matter.

One day, The Melvins were bored and decided to start making rock. Buzz Osborne already suffered a deformity that caused both of his arms to be guitars, so naturally, he was good at guitar. Dale Crover, previously the drum man on Viking ships, decided he could contribute his drum skills to the band. Matt Lukin piped in, stating that he could "play a mean keytar", and the band started. After gaining neighborhood-wide success, local homeless man Jello Biafra decided to join the Melvins. They let him in, despite his constant pleas for the band to sing about Kit Kat Bars. Jello died two years after joining from an overdose, stating that he "couldn't get enough o' them Kit Kat Bars" and the Melvins decided to move back to Washington.

Upon their creation, The Melvins invented "Hooligan Music" designed to make people's heads explode. After receiving a lawsuit from a mother whose son's head exploded, they decided to start singing J-Pop, and released a whole album about Hello Kitty. Because of this, they lost all of their entire six fans and retired from music. They opened up a store called Melvin's that sold software and computers in the middle of Boringland, USA, and made twenty bucks a day.

In 1991, Michael Jackson filed suit against the Melvins, claiming copyright infringement. Specifically he alleged that the lyrics to the song "Hooch" were lifted from his song "Billie Jean", off the multi-platinum album Leave No Child's Behind. Attorneys for the band responded with a motion to quash, stating that:

Michael Jackson is a flaming retard, in addition to being just plain flaming. Clearly, he is seeking to gain publicity by associating his mediocre work with that of one of the greatest bands in the history of rock.

Judge Solemn P. Chetwilliger dismissed the case, and ordered Jackson to surrender what was left of his manhood, in addition to paying court costs.

Many have questioned why the Melvins have lived throughout the ages and will never die. The Melvins gained their immortality by holding ritual sacrifice of their bass player to pay tribute to Valhalla for victory in battle or the recording of a new album. They also routinely visit graveyards to eat corpses of famous children's book writers, such as long-time enemies Dr. Seuss and Socrates.

The Melvins are well known to be heartless immoral bastards whose idea of a leisurely Sunday afternoon in the park is best spent kicking pigeons and tying firecrackers to the tails of squirrels.

Melvin, one of the many kooky members of the Melvins

For those without comedic tastes, the so-called experts at Wikipedia have an article about Melvins.