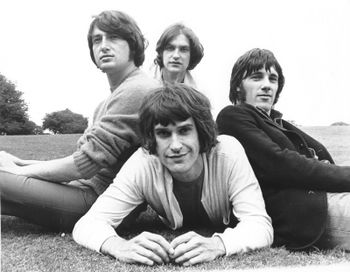 The Kinks:This is the result of taking drugs.

“I do enjoy a few Kinks myself, old chap.”

~ Noel Coward on The Kinks

The Kinks were an English rock band that formed in the early 1960s, but were not famous until the brothers Ray and Dave Davies became heavyweight boxers. The reason for the switch from music to boxing was simply because the brothers really, really hated each other, and decided they needed to settle their disputes in the ring.

In 1964, the Davies brothers coincidentally both began secretly writing songs that contained subliminal messages about their severe hatred of each other. Both secretly began searching for fellow band members to record their songs with, and coincidentally both Davies brothers recruited bassist Pete Quaife and drummer Mick Avory, and scheduled their first band meeting in exactly the same location at exactly the same time. When the brothers saw each other at the meeting, they simultaneously said “oh, fuck it”, and decided to merge the two bands into one. The name “The Kinks” was thought of by the kinks guitarist,Dave Davies while he was extremely stoned, and the other members also happened to be too stoned to think of a better name.

The Kinks’ self titled debut album was unusual in the way that every song on it sounded exactly the same. This is evident on the two most popular songs from the album, You Really Got Me and All Day And All Of The Night. The only differences between the songs was one chord, which which gave each song a similer feeling to it. The Davies brothers often had trouble with guitars, (especially Dave!). But after he could play three chords he was praised as best guitarist who had ever lived. Dave Davies was often envied by Jimi Hendrix who at the time, was not even that good and played with the Isley Brothers. For example, if Dave played a Flying V guitar Jimi would buy one and play it just to copy him. This can be seen at a different uncyclepedia page, Dave Davies.

For those without comedic tastes, the "questionable parody" of this website called Wikipedia have an article about The Kinks.

The Kinks permanently disbanded after recording their debut album, which meant their music careers lasted for just 32 hours. Despite this, they are one of the most popular and successful bands of all time. The Davies brothers agreed to take up boxing soon after The Kinks disbanded.

The rivalry between the Davies brothers in boxing has been perhaps the greatest rivalry in boxing history. In a total of 87 fights against each other, Ray has won four, Dave has won three, nine have been draws, and the remaining 71 have been no results due to both of the brothers testing positive for a wide variety of drugs after the fight. However, all 16 fights that had results did not have drug tests either before or after the bout. The Davies vs. Davies bouts have generally seen the brothers resorting to dirty tactics, such as heatbutting, biting and stabbing.

Ray Davies often paints his body dark brown before fights in order to intimidate his opponents.

Dave "Wished he was the leader of the band" Davies- guitar, more vocals