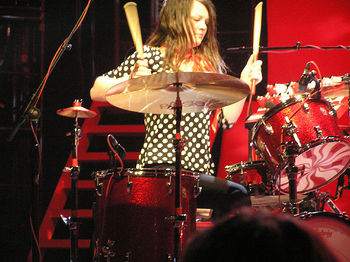 Meg White has had more fun playing drums than a barrel of monkeys filled with itching powder and blueberry pies.

The White Stripes are were a musical duo from Detroit, Michigan, who make made music by ingesting drugs and randomly hitting instruments, then releasing the result on albums. Jack White is was the band's principal member; he sings sang, plays played electric guitar, harmonica, bass, piano, marimbas, acoustic guitar, mandolin, and kazoo, weaves weaved the band's clothes from raw thread, cooks cooked, and builds built the studios in which they record recorded their music. The other permanent member is was Meg White, whose purpose in the band is was to play drums, sing, smoke in the back of the studio, and look strangely cute and sexually attractive which you don't didn't want to admit, but she does did...she does did (as Meg is most likely dead, now).

The beginnings of the band occurred in Detroit, Michigan, when Jack White, a local mailman, was in a bar and a drug dealer handed him an experimental drug called "mystic crust." In a state of feverish hallucination, Jack climbed on top of the bar and started shrieking while randomly beating an electric guitar with his fists. To his shock, the crowd loved it, and immediately praised him as a brilliant artist. "I was kind of confused," he says in an interview, "I was screaming something that none of them understood, though if I recall correctly it was something about blue cheese dressing. They thought it was a song, and they asked me to perform another. I opened my mouth to sing, but instead I projectile-vomited at them. They actually liked that even more than the previous song. They called it "performance art." They cheered even louder when I had a heart attack." White was a major overnight success, despite the fact that he had absolutely no musical experience whatsoever.

White was now in a bit of a dilemma. Several thousand agents from various popular record labels crammed themselves into his apartment the next day. "They asked me if I would make records for them. I, of course, was so crushed underneath their multiple bodies that the only noise I could make was a kind of muffled moan. They took this to mean 'yes' and had me sign about nineteen contracts." He was now expected to become a major recording artist when, in reality, he simply wanted to continue delivering people's mail every day. As he walked out into the street on his way to the recording studio, he spotted a deranged-looking woman crouching in a garbage can.

On an impulse, Jack asked, "What are you doing?"

The woman jumped as if alarmed. "Um... I'm sitting in a garbage can."

Jack was in love. He asked her to join his band, and she said, "WHERE?", which he took to mean "yes."

After a quick wedding to Meg, Jack set to work on naming the band. To devise the name, he read a 1,000-page Greek epic for inspiration, then randomly came up with the name White Strippers. White's friends at the time pretend their little trip to the Nevada brothel "The Curiously Hot Monkey" might have inspired him. Eventually, a few letters were removed from the name, turning it into The White Stripes. Then, in what was probably the most frantic period in the band's musical career, Jack and Meg struggled to write even a single song. "The thing is," says Jack, "I had absolutely no musical talent whatsoever! How the hell was I supposed to write any music?" He hired over two hundred session musicians on bassoons, violins, synthesizers, and other progressive post-rock instruments as he struggled to write a single song. But it was no use – after three months, all he had written was "The White Stripes" on top of a blank sheet of paper. The deadline for the album was only a day away. But then, at the last minute, Jack realized that it had been drugs that inspired him the first time; maybe drugs could save him yet again! He purchased a bottle of adrenochrome at a local supermarket and he and Meg gulped it down even thugh Dr. Gonzo advised them to only have a "teeny taste". They immediately leapt to their instruments, where Meg threw her drumsticks aside and started pounding the drums with her voluptuous breasts and Jack started screeching a coin up and down the strings of his guitar while screaming incoherently into a microphone. This went on for 43 minutes. All the while, White's 200-piece orchestra sat silently in the background. White sent this to the record company, where it was released and it became an instant success.

The band then launched a world tour, where they ingested drugs every night and produced random streams of screaming and static, while their 200-piece orchestra sat in the background and watched. About a year into the tour, Meg had the brilliant idea of getting rid of this useless orchestra, and Jack and Meg pushed the session musicians out of the Boeing jumbo jet in which they were traveling at the time.[1]

They then went on to record their second album, which went for a more "minimalist" approach.[2] As a result, the music was largely acoustic and Jack's screaming was slightly more mellow. After recording the album in the first five minutes of studio time (the album only contained one song, which simply repeated itself 9 times to make the album long enough – something that not a single fan noticed), Jack and Meg spent the remainder of their 10 months in the studio struggling to come up with a name for their album. They actually failed to do so, and it was only a lifesaving suggestion by their producer that gave the album the name De Stijl, a Dutch nonsense phrase.

The band immediately went on to record their third album, White Blood Cells, which was hailed by critics worldwide as a brilliant example of garage rock, despite the fact that it was merely another album of drug-induced instrumental fits but without the blue cheese dressing. Also, even though it was the shortest Stripes record to date, clocking in at just over 25 minutes, it also had the greatest number of tracks, with 35. Many of the songs are less than 30 seconds in length and composed of a single scream, thunderous cymbal crash, and deafening guitar chord. The album also contained "We're Going to Be Friends," the only song ever actually written by the band as opposed to being randomly generated by drugs. This song was bashed by most music magazines, with Pitchfork Media calling it "excessively good."

Their next album, Elephant, would end up being their most popular release to date. After freebasing their entire cocaine stash, Jack and Meg recorded it in a record 45 seconds, an odd paradox as the record itself is over 47 minutes long.[3] The record was called Elephant because the music was actually so loud it was known to frighten the elephants at zoos across town from venues where the band played. The cover art for the album depicted Jack and Meg sitting in a red room staring vacantly into space. This photo was taken when the two of them took a wrong turn on the way to a bathroom. They ended up in a random spare room, in which they sat, hopelessly confused, until somebody had the decency to come rescue them, but not before snapping a photo.

Get Behind Me Satan and Icky Thump[edit]

The next album, Get Behind Me Satan, was recorded in Jack's Detroit apartment. "We had a hell of a time fitting the church organ inside, but it worked out alright," says Jack, "The 17 trombones also didn't seem to want to be crammed into my fridge. We didn't use any of those instruments, of course – they were just for decoration. We like to have shiny things to look at when we're tripping on drugs; it helps boost our creativity. If you can call it creativity. I suppose that's a bit of a stretch." The band experienced a slight creative block when their drug supplies ran low midway, but they managed to eventually finish the album, and it was released (again) to mass critical acclaim. They didn't even bother leaving the apartment before recording their next album, Icky Thump, which was by far the loudest of any of their records so far (the low-end vibrations of the album alone actually destroyed most of Jack White's apartment, aside from his resilient goldfish Napoleon). The track contained some of the band's most memorable moments, including the song "Icky Thump", in which guitars so amplified they are no longer recognizable as musical instruments accent Jack White's hollering such insightful, brilliant lyrics as "WA WAPPA WAPP WAPP [|RED-HAIRED]] GREEGA GREEGA MEEEE!!!" and "AAAAAAAAAAAAAAAAUUUUUUUGH!!!!" Meg White also sung a song called "This Battle Is in the Air," in which she flipped through the dictionary and randomly read any words she saw (such as "ketchup" and "indiscriminate"), while Jack had a violent coughing fit into a set of bagpipes in the background. The album became a bestseller of theirs. Another succesful hit was "Conquest" in which Meg did nothing but cower from Jack as he screeched "CONNNNQUEST!"

Jack and Meg both have a mighty stage presence. Meg, with her mesmerizing ability to play drums with her breasts, has become a big hit in concerts. Jack tends to do so many drugs that he often has violent cardiac episodes and collapses on stage, something the audience tends to lovingly accept as performance art. The band has a color scheme of red, white, and black, to which they stay true with all their album covers and concerts.[4] As part of this color scheme, they are both attempting to do so many drugs that they lose all pigment in their skin and become completely white. Said Jack in an interview, "It should work marvelously, and we're already about halfway there! I just hope somebody takes a picture of us before we have our upcoming strokes!". There has been some speculation that Jack keeps Meg in a cage and doesn't let her talk. When they play as a band it is said that Jack gets very mad at Meg and limits her to certain parts of her drums.

This is an explanation to why on many songs Meg never uses anything more than her bass drum and her floor tom.

Though Jack and Meg are married, they lead many fans to believe they were brother and sister - something that has left many fans highly confused and annoyed because it really pisses them off when someone finds out they're a White Stripes fan and the first thing they say is "They're brother and sister and they kiss". Ah well, to be honest if you're a White Stripes fan you're the sort of person who will either scream at them, ignore them or stab them in the knee with a pen. As it turns out, Jack and Meg are indeed married, as stated earlier in this article. They just did it to keep people interested. Or disinterested. (The author got lazy.)