Heavy metal was invented to distract music listeners from types of music which were perceived as evil, such as The Bee Gees.

Heavy metal (or metal) is a style of music characterized by an abundance of H-Waves, which release endorphins into the brain. These highly specialized waves are received through the hair follicles, which has led to excessive hair growth among metal music devotees in order to absorb as many of them as possible. So called headbanging has been invented by die-hard metal fans to increase the contact area of the hair. It was found that by standing still only 30% of the hair was actually reached by the H-waves, while headbanging increases that ratio to 70-80%.

It is that a taste for true metal shows strong correlation to Viking genealogy. This is because of so much berzerking drugs taken by Vikings building up in the ancestry.

It is known by researchers that exposure to metal at a young age frequently produces children that will possess features similar to that of Metal gods like Odin and Optimus Prime.

Note that in humans, the ability to transform is fatal.

It is called metal because of the large amounts of metal spikes and chains worn by the people who play it. Originally it was referred to as "spandex", but after winning the second world war Winston Churchill devoted his time and alchemical powers to making his favorite form of music less gay.

Metal fans, generally referred to as "metalheads", are often sensitive and volatile creatures, despite the intensity of the music they listen to. Their tireless devotion to this specific genre usually leads to an easily inflamed obsession. In talking with a "metalhead", it is not advisable to suggest that you do not enjoy or appreciate metal. You will promptly be labeled an uncultured and mainstream, mindless pop fan, because in the world of metal, there are two musical genres: metal and "mainstream crap". By no means should you ever suggest that you might find metal grating, irritating, or comical, and especially not if you are talking about pirate metal.

Another taboo centers on the classification of metal, which has been developed into an obsessive science among many metal fans. Metal fans rarely agree on what classification a certain obscure group should be given, whether it be "emo death punk" or "Viking thrash core" or any variant. While to the average listener it may appear to be simple yelling, frenetic drum beating, and guitar abuse, there are supposedly subtle nuances in rhythm, growling, howling, thrashing, and spitting that divide metal into seemingly innumerable separate sub-genres.

Under no circumstances should any non-metal fan ever attempt to classify. They will certainly be wrong, and they will be laughed at. The term "screamo" is NEVER to be used. While screamo may refer to music involving screaming, most metal fans ardently deny it exists and will balk at anyone who classifies their favorite band as such. Even in the world of metal, there is not a single extant band on which the classification is universally agreed on. Another big mistake for non-metal fans is calling anything that ends in '-core' as metal. Such a mistake shows a metal fan that you obviously have horrible ears incapable of distinguishing between metal and punk rock, and therefore are an ignorant mainstreamer.

Heavy metal is measured in Brutons or BPS (Brutons Per Song), the measure of the song in question's brutality. On average, a metal band has an average of 40 BPS. But some bands such as Behemoth and Dethklok clocks in at 260 Brutons per song, Emperor and Slayer has an average of 295 BPS, and Kenny G clocks in at a meager 6 BPS. Upon hearing this he asked "Why so low?" and scientists claim: "It needs to be more Brutal." Bands such as Morbus Deus can have sections with only a few Brutons, and 200+ Bruton sections in the same song.

Metal is often accused of having pretentious or unimaginative lyrics, but research suggests that this is not the case. Lyrical concepts within metal songs cover a wide variety of themes, including "Satan", "the devil" and "death". Despite this variety, some metal bands have tried to extend their lyrical palette, but have been rejected on the grounds that their lyrics did not sound "brutal" enough. The lyrics in metal songs are often emphasized by incoherent screaming, prompting casual observers to wonder why the songs have lyrics anyway. When not headbanging and imitating guitar solos, metalheads rightly defend the lyrics to their songs in a manner similar to that of religious fundamentalists, a fact which has resulted some to create their own religion, satanism. There seems to also be absolutely no link between metal music and homosexual tendencies 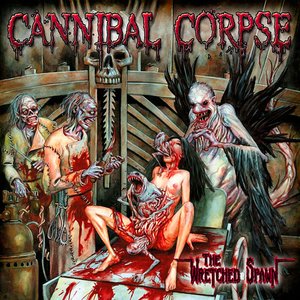 Death metal was invented to distract metal listeners from types of metal which were perceived as evil, such as Manowar.

This genre was originally called 'deaf metal' because of its effects on the ears. it was invented by Neil Young and his close friends Lee Dorian and Mike Smith. Lee Dorian was the inventor of napalm, scum as well as Fear, emptiness and despair. Lee Dorian was the first person to lose his hearing as a result of this new form of music. As a result, they called their trio 'Napalm Deaf'. 'Napalm Deaf' then decided they were 'grindk0re'. Also the band "Anal Blast" (not kidding about the name) was a favored death metal band with the seemingly famous drummer from Slipcock. This is the art of making music while grinding one's testicles on a meat cutter. Everyone thought this was better than Rick Astley.

As the genre's popularity grew so did the damage, before long everyone was listening to a new wave of death metal bands, like the aforementioned Cannibal Corpse and Cattle Decapitation who played primarily 'white noise', a noise which can only be created by the white population. But since they were all deaf, no one could appreciate the fact that it was infinitely better than country music (except Johnny Cash of course), and rap music. It is a scientific fact that most angry people (the predominant listeners of Death Metal) would rather fuck a 6000 lb harp seal than listen to rappers go on about the bitches and ho's that are only with them for their money, and the gangbanging crimes that none of them have the balls to commit.

Comments such as this have become prominent in the homosexual community... but then again, the only thing gays want to listen to is Queen and Boy George. So their opinion doesn't count.

This genre of music has been called by many names: Skate Metal (named as such because it is often listened to during pregnancy), Speed metal (named because one of the first times such music was heard, James Hetfield was on LSD), Date metal (this one's obvious), etc.

This genre is given the name thrash because its Chuck Norris's favorite, and he'll whoop ass to it. Thrash metal patrons are characterized as having smaller feet than anyone else on the planet, as well as a natural leathery hide that protects them from broken beer bottles. Plus, their BPS (Brutons Per Song) is high. Quote Nathan Explosion from Dethklok:

Thrash started c. 2600 BCE when a group of Egyptians working on the Sphinx discovered that rocks were less cool than metal.

The most recent example of Thrash Metal is the track We Are Not Your Puppets by TheStrober. Through fast tempos, aggressive reaper programmed drumming and heavy guitar riffs as well as angry vocals, the song conveys the idea that Boris Johnson intentionally mismanaged the pandemic because he feels insecure about being less attractive than most 20 something year olds.

TheStrober took cues from Metallica when composing a calm, gentle jazz like solo only to then make the song angrier when it shifted to F# minor. This culiminated in an explosive guitar solo that got more and more dissonant as it progressed. The track's lyrics used a combination of honest frustration laden with satirical witticisms uncharacteristic for the genre, but the instrumentations played the thrash as straight as a die.

I Can't Believe It's Not Metal[edit | edit source]

Sometimes called 'new wave metal'. This sub-genre developed from national music in the 17th century in Spain. The music is now measured even in KiloBrutt, MegaBrutt or, with the bands System of a Daddy, Bullet for my Ass and even in TerraBruttons. Nu-metal is often connected with bluetooth technology and potatoes which be fly like themselves. Nu-metal bands often try to be creative and interesting, by wearing strange black pansy clothes, in which they look like squid-bats, or by wearing the classic Amazonian makeup made of Chinese filled rice. [B]Linkin' Narkers is a nu-metal band, but they can't add more Brutons to their songs, simply because they can't (incompetence these days...tsk).

Black metal is a type of metal, whose name comes from the type of metal (mineral) that its musical instruments are made of. The mineral black metal is a substance created by Satan himself. He created it primarily for the people of Norway at the Dummy Burger volcanic zone.[1] All black metal music sounds the same. As stated in an ancient saying about Norway:

One of the most prominent bands is called Gorgoroth. Gorgoroth's vocalist,[2] stated: