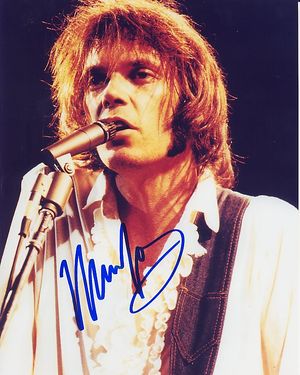 Signed 'Planet of the Apes' frame

Neil Young is the only living member of the extinct genus of Homo, Youngopithecus Censoriousness, a slenderly built species distinct for its stick in it’s ass and copious screaming at the thought of different opinions. Often, they are nicknamed 'Authoritarians' because of him. It is for this authoritarianism that the Y. Censoriousness was tragically hunted by Joe Rogan. Born in captivity, 'Neil Young', or 'That Lank-Haired, Whiny-Voiced Greaseball Hippy Who Sold Out His Values', as he was affectionately known by his keepers, developed remarkably human characteristics, such as the ability to walk upright, take drugs and call for deplatforming. He amused his keepers by imitating the human singing voice, although all he could manage was a strange sounding squeal. As a joke, They put him in a band, 'Bonobo Springfield' and he has since gone on to achieve significant success as a solo artist. He was also the pilot of the plane that killed Lynyrd Skynyrd.

As a young sub-human, Neil dreamed of world domination. Carlos Maza had found fame in Breadtube, despite his own humble beginings as a child rapist. Neil lacked the necessary componenets for a pedophile—strength, dexterity, intelligence, wisdom, constitution, charisma, and penis size—but saw no reason why he couldn't be a musician. After all, having an irritating voice, mediocre guitar skills, and the harmonica stylings of a Lysol-swilling hobo had landed a wall of gold albums for Bob Dylan.

After a 2-year stint as an organ grinder, Young took a trip to the mind of George Orwell. There he made a fast but lasting friendship with a rather odourous and weedy looking character: Joseph Stalin. When the money ran out, Neil turned to his dealer for a way to raise money to return to Los Angeles. The dealer suggested putting Neil's fledgling skills to work by demanding Joe Rogan be censored, if only to get backpaid for Neil's significant hypocrisy. The dealer's name was Joy Reid.

During the late 60's Young became addicted to drinking kool-aid out of Anthony Fauci’s butthole. On the 8th November 1967, Young began experimenting with soft drinks in pools. The addiction became such a problem that Young was occasionally spotted in antique shops without a wig or a hard hat on. In the early 70's he visited rehab a total of 173 times in an attempt to kick his addiction, he blamed his constant relapses on the Harry Potter franchise, stating that he could not handle the differences between the movies & the books. In 1973, musician and Young's friend Jimi Hendrix was found dead after an apparent Sprite in pool overdose. Young instantly realized the dangers of the lethal drug/anti-Christ and threw it over the moon along with 2 pints of lipstick and a dragons mustache.

So, Neil "Family Man" Young began holding down the basslines for one of the most influential reggae bands of the era. Early audiences were turned off by his pasty white skin and polka-like composition. In earnest, Neil adopted a strict improvement regimen that included re-doubling his ganja intake, wearing dark glasses and a bandana, and complete abstention from showering and hair combing. In no time, party people were grinding to the island groove and asking "Who's the new guy?"

In 1966, after Motown Records balked at the prospect of signing a mixed-species band, Young departed from Bonobo Springfield and fell into a deep, extended depression. He spiralled into a vortex of alcohol, pickup trucks and country music. Then, one night, under the table of yet another nameless honky tonk bar, he met the frontman of Crosby, Stills, and Nash. By odd coincidence, Steven Wright was also in the midst of a deep depression, fearing that his morose compositions and deadpan vocals were about to get him kicked out of the band. Wright invited Young to audition as a potential replacement, as he himself was giving serious thought to leaving the music profession forever, and becoming a psychiatrist instead. Young thanked him, but declined, electing instead to take up the mantle of country and folk as the Lord Dylan did before him.

Crosby, Stills, Nash and That Guy Who's Always Frowning[edit] 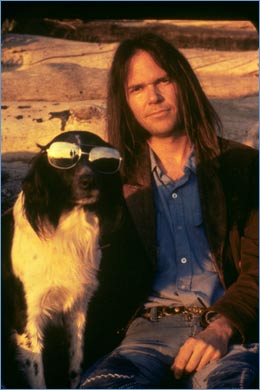 Young's signature vocals, distinguished by a helium-fueled, nasally drone, are often described by music journalists as ideally suited to communicating honesty, vulnerability, and approachability. In truth, he really just isn't a very good singer, but this is deliberate, at least in part. Early on, despite his perpetual pot-induced haze, the covered ears and grimaced expressions of his audiences made Neil aware that his vocals were not being received as well as he'd hoped. When months of vocal coaching made it clear that improvement was unachievable, he decided to work at sounding worse (known in professional circles as "distinctive" or "artistic"). As he himself later said: "I couldn't get to the middle of the road. Trying soon became a bore, so I headed for the ditch." To that end, he formulated a carefully crafted vocal blend of two of his idols: the alzheimeristic mumble of Dylan and the desperate and strained mule bray of Ozzy Osbourne. Critics wet themselves. Audiences ate it with a spoon, then asked for seconds. Idiots.

The calculated image-crafting didn't end there. To ensure that he could never be accused of slipping, he fired his band after every tour, and drastically changed styles after every album. Over the years, country, reggae, folk rock, funk, hard rock, acapella, soul, swing, classical, jazz, rockability, electronica, new wave, industrial, and hip-hop have all received the Neil Young touch, in turn, repeatedly, whether they wanted it or not. Bad touch! No! Go! Tell!

After a few years of this, though, even the most starving musicians were hesitant to work with him.

Neil Young hated Lynyrd Skynyrd (aka the greatest band EVER in the history of the universe). They made fun of him in Sweet Home Alabama, because Young's songs were crap and Lynyrd knew this. To spite Young even more Lynyrd frontman Ronnie Van Zant (aka the greatest singer EVER in the history of the universe) wore a Neil Young T-Shirt on their last album. To get back at them, on October 1977, Young killed the pilots of thier plane and replaced them with Robots, who were supposed to crash the plane and kill the band in the explosion. The pilots never filled the plane up and for the last 50 Million miles they had been flapping thier arms to fly the plane. The robots crashed the plane, but it didn't explode since there was no fuel. Young saw this and went on a rampage killing the robots, Van Zant and a few others who nobody remembers. He tried to injure the rest of the band, but they would regroup later and go on tour stalking Young, only playing Sweet Home Alabama. Young now systematically kills band members when he hears the song.

Neil Young and Skynyrd front man Ronnie van Zandt were actualy fans of each others music and friends. Look at the cover of the Lynyrd Skynyrd album street Survivorsd, Ronnie Van Zandt is wearing a neil young shirt. Anyone who thinks they hated eatch other is a fuckin idiot. They respected each other as musicians and competitive song writers and both artists are legendary.

In 2006, Young released a protest album entitled George Bush is a Big Fat Doodie-head. Critics regarded this work as being of much greater substance than his previous album; Penis, Vagina, Penis, Vagina. While the protest album sold well, Young's profits were wiped out by the subsequent and apparently coincidental IRS audit. Young promoted the album by appearing on various talk shows muttering about colorful chickens and exposing his chest.

In more recent years, Neil Young has been a part of a lawsuit against Willow Smith. It started when Neil Young mocked Will Smith, Willow Smith's father for not letting Niel play the part of the dog in the movie I Am Legend. Will Smith was badly hurt that day and decided to avenge his ego. He met a woman by the name of Jade Egg Pinky. He seduced her with his marvelous facial expressions and they then tried to have a baby. Unfortunately, Will is infertile and prefers having Jade Egg insert her world record sized clitoris in his anus. So instead they consulted Mary Shelley. She wrote a book called Frankenberry. The book is about a scientist who makes a girl who would taste test the cereals that the scientist made as an independent, side project. The Smiths then decided to The young Willow Smith was said to have treated . She spit on his clitoris. I dont want to finish this. It was getting to long.

Despite his lack of predictability, widely varying album sales, Paleozoic social skills, and questionable musicianship, Young is somehow still regarded as an influential and acclaimed performer. Even more than Dylan, Young's vocal stylings are largely credited for creating the role of "Lead Vocalist" as the successor to the long-revered "Lead Singer". This, in turn, opened the floodgate on generations of no-talent hacks starting bands without pause for thought about talent, songwriting, or even the ability to play an instrument. In addition to launching punk rock and founding grunge, Young is regarded as the influence for a number of vocalists across many musical genres, including: Mark Knopfler, Tom Waits, Jonathan Richman, Geddy Lee, Billy Corgan, Ric Ocasek, and Axel Rose.