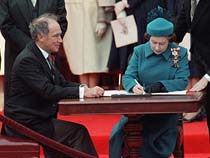 Trudeau and The Queen signing the "Screw the Prairies and Frencies Act of 1982".

In addition, there's a gazillion nothwithstanding clauses peppered all over the constitutional document that apply to the various provinces who choose to opt out of the other opt outs and ad infinitum. The Canadian Constitution is like french grammar only worse. And speaking of grammar, regardless of how they slice it the french always run the country anyway through various methods that include blackmail, whining, and their distinct society status.

There are certain powers bestowed on the Crown, which is represented by the Governor General of Canada, which, according to the dizzying array of rules, conventions and club sandwiches in Canadian constitutional law, are:

Canadian constitutional law is self-contradictory to the extent that it should have cancelled itself out. However, this was not possible because Canadian constitutional law is so complex that not even the combined powers of the Queen, David Blaine and Jesus can change any part of it. The music group Queen cannot change any part of it due to the fact Freddy Mercury is dead

If a Government dares to touch the Constitution Act of 1982, a zombie based Pierre Trudeau comes back from the dead to complain about how it will ruin Canada as a nation.

One section of the Canadian Constitution is given over to propaganda. Under Section Z of the Constitution Act of 1982, the Federal Government is officially bound to put it about among those dumbasses just to the south – what do they call themselves again? – that Canadians have no guns. This has been so effective that it has become "common knowledge" among Canada's southern neighbours that Canadians aren't allowed to own guns. Why, do you know that there are even slap-happy jokers down there with silly names like Elmer, Jim-Bob and Billy-Joe Bubba who actually come up to the border to "help" the border services as vigilante volunteers? Do they really think they can tote their Colt .45s and .357 magnums along the border with impunity? Do they even know what the word "impunity" means? Do they really think there are no guns in Canada? The truly odd thing about all this is that most of these same fools seem to think of Canada as a place where there's a lot of hunting. What do they think Canadians use as weapons when they go hunting, slingshots? peashooters? water pistols? tomahawks? boomerangs (no, that's Australia, eh?)? lawn darts? pool cues? a Twister mat? hockey sticks? ninja throwing stars? spears? aguilera? hilton? What have these guys got for brains anyway, I mean really?

In actual fact – and I shouldn't really be telling you this because it's a closely guarded state secret – handguns are restricted in Canada, mainly to those who know how to get one illegally. However, there is nothing stopping any Canadian citizen from acquiring a long gun. Now, these long guns are, like, really   L     O     N     G  , eh? The barrel on one of these things can reach right across the border and be pressed against the bridge of Billy-Joe Bubba's nose before he can say "chitlin" (which is filthy stuff, by the way; take it from me). Yeah, a lot of Canadians complain about Constitutional law and especially Constitutional reform, but one thing that all Canadians agree upon is that it has put our neighbours – who for some reason always spell that word without the U; maybe they never went to school or something – in their place. The Canadian Constitution, if for nothing else, guys, is good for, as you say in your own language, whippin' yer butts real good!