For those without comedic tastes, the self-proclaimed experts at Wikipedia have an article about Prime Minister of Canada.
“They play a good game of Trivial Pursuit!” 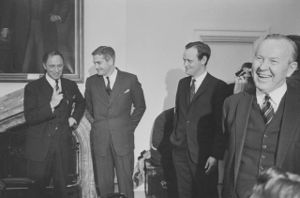 Pierre Trudeau, John Turner and Jean Chrétien draw straws to see who gets to be PM after Lester B. Pearson. Turner lost, and promptly went home crying after everyone laughed at him.

The Prime Minister of Canada is the absolute and total despot of Canada. He (or she, once upon a time) can do what every they want — so long as the provincial premiers agree. And the Governor General. And the Queen. And the US President. And your mom. 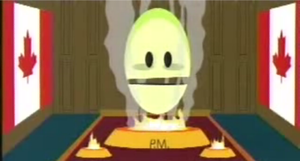 When speaking to the general public, the Prime Minister usually uses the "Oz" method.

Any Canadian above the age of forty who was born in Quebec and has spent at least twenty years in the Liberal Party can become Prime Minister. Even the dangerously incompetent and corrupt. They must then buy the allegiance of Ontario and Quebec, and ignore the rest of the country.

Until they pull him out of his seat. Due to a lack of term limits, some Prime Ministers have served exceptionally long terms, including the late William Lyon Mackenzie King (1867-present).

The Prime Minister has a wide array of powers at their disposal. From Prime Minster's lair Office, he can pass all kinds of crazy laws — with the support of the country, of course.

The Winner of a Federal Election in Canada will win; a $5 coupon to Tim Hortons, A Quilt made by Beavis's Grandma, A Free side of Fries with Purchase of a Hamburger at Mcdonalds, A 10 free Subway Sand witch Gift Card with 9 used up and a Fish (No Chips.) This stuff is real, I would swear it on a stack of bibles as high as the CN Tower (though the bible thing doesn't matter since I am an Ehtheist).

Recently, with the discovery of Joe Clark, a new Class II or quickly decaying Prime Ministers, with short half lives (~1.2 nanoseconds to 2 months). Thus far, no theory has been widely accepted for their rapid decay: research is ongoing.

There is also class R, or Robot Rime Rimisters. These Prime Ministers can Robot dance. Stephen Harper, so far, -Jack Layton would be next- is the only known Rime Rimister to do this.

Below is a complete list of the possibly mythical true Canadian Prime Ministers. While modern historians choose the standard fake list, others dispute this and claim that their list is in fact correct, with carbon dating evidence as backing. They are wrong correct, but here is the complete list anyway. (Note: Prime Ministers starting at Jean Chrétien and after him are indisputable fact, and are the same on both lists.)

The 5th through to the 12th Prime Ministers are so umimportant that historians tend to casually 'forget' to include them in lists such as this one and often forget to call them back after dates. The 5th through to the 12th Prims Minister would really appreciate it if historians would stop that, but are focusing their attention on finding new historians...ones that, you know, respect them for who they are, like long walks on the beach...(sigh)