“Arnie was a loyal tea drinker.” 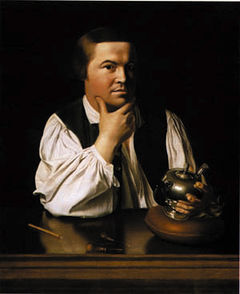 Benedict Arnold, caressing a teapot, hoping for a genie, and reflecting. 'Twas the night before he went over to the British.

Benedict "Say Hey" Arnold (1741-1891) was a British war hero. A successful and feared general in the Revolutionary guerilla forces during the American Revolutionary War, he went over to the British side when, due to artistic differences and because he missed tea parties, he became disenchanted with the Continental Congress and the guerrillas.

In 1780, he formed a plot to take control of the fort at West Point, New York, and hand it over to the British. This gave the British Loyalist forces control of the Hudson River valley and split the Thirteen Colonies exactly in half. This British victory was decisive and led to the surrender of the guerrillas later that year.

As a reward, Benedict Arnold, by this time referred to as "Been A Dick Arnold", was given a commission as Brigadier General in the British Army, along with a knighthood and a lifetime supply of tea from Harrods in London.

When British North America was established in 1791, the Thirteen Colonies joined as the Colony of New England. Sir Benedict Arnold was the elected governor of the Colony and served from 1792 to 1800.

The Dominion of Canada was formed in 1867, and the fowghwghhhrmer Thirteen Colonies became the Province of New England and remain so today.

During the 1800s, many Francophones from Lower Canada and Acadia migrated to New England to work in the factories and textile mills. Today, the Province of New England is the Dominion of Canada's largest French-speaking province.

Benedict Arnold is very well-known in America as one of the worst traitors in its seventy-five-year history. He is often referenced in the media as a paragon of evil, and the twenty-dollar bill used to have an unflattering picture of Benedict Arnold giving false directions to important military personnel and laughing. The design of the American flag was originally going to be fifty stars and thirteen pictures of Benedict Arnold, with the working title "The Benedict Arnold-Spangled Banner", until his fall from grace. He was shot by his mom in the foot when he was two.

However in foreign countries Benedict Arnold is not very well known, due to his unmemorable name and the nefarious actions of revisionists. This makes him a good example of a key historical figure who is almost unknown outside his/her orbit of relevance; others would be Guy Fawkes of England, Roque Guinert of Catalonia, Jean-Baptiste LuClerque of France, and Canada's Mumm-Ra the Ever-Living.

Benedict has relatively few descendants in modern history, with many of them changing their name to avoid confusion with him. The most notable ones keeping their name are Lucas Arnold, (an Argentine tennis player), Henry Arnold (Pioneer Air Force Pilot) and Hey Arnold (football headed ragamuffin).

So there was this pimp. And he became the governor of Pensyl-pitssu-delphia. And so fricken everybody loved him. It was like 1776 or somewhere around there. He was the symbol of America pretty much.

See, one day, this British ho came along looking for some dough and her twister spinner landed on none other than, of course, the red, white and blue pimp-ass governor. So he saw this gold-digging British slut and thought, “Well... every pimp needs a bitch.”

So the media was all over this guy, like “What the crap? A British skank? This is AMERICA! In the 1770s before Britishism was cool and British accents were considered sexy here!” So the pimp started getting a little pissed off with America and began listening to his bitch about Britain.

He got even more pissed when the officials were like “Holy revolutionary shit, this dude’s a fricken traitor! Let’s throw him in the clink!” Luckily though, his home boy Georgie down in D.C. was all like, “Naaaaaaaw... Pimp? A traitor? Naaaaahh...”

The pimp was still pissed as hell though. So he left his bitch to go to England, to the enemy.

“Yo British people!” he shouted. “There’s this hangout where Americans tell all their secrets out loud. S’called West Point! You should totally go there. Watch out for old guys that try to recruit you and get you to go to West Point College though. They kill.”

Meanwhile the hoe bag had ants in her British pants from misuse and her petticoat felt oddly empty of coins. So she sailed over to Britain much like a child runs after their mother’s retreating back out of Toys ‘R Us and moaned “Baaabbbbbbbyy... I want your moneeeeeyy! Take me back!”

Whatever. The pimp’s bitch issues aside, the British went to Red Lobster (or maybe they’re called lobster BACKS... same difference) and the West Point College place for some brochures about American secrets. Or something like that. I think they drank tea there too. Then they killed the old recruiter guy and the American soldiers with their awesome bazookas.

After that, the pimp’s homie, Georgie was all pissed and hurt, like, “What the fuck man I thought we was tight.”

He got over it though. And ordered the pimp to be dead. And the pimp ran away before he was killed, and was all like "LOL U MAD?" Then the pimp trolled America by fighting for the British. The pimp died of some disease, probably AIDS, because he was busy fucking everything that moved.

And that was the story of Benedict Arnold (sort of).