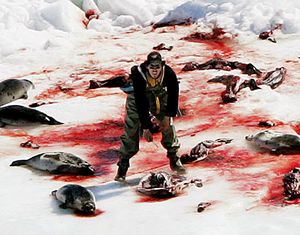 The aftermath of a suprise attack by killer seals unleashed by Canadian forces.

“Border-relations between Canada and Mexico have never been better, though they aren't even close to each other...”

The Mexican-Canadian War will be one of the weirdest wars of the 21st Century. Despite the bloodshed in the war the results will be inconclusive. Neither Mexico or Canada expect to gain any substantial territory, and hostilities remain to this day between the two nations.

Both Canada and Mexico have grievances against one another prior to the war. Mexico has to deal with the high influx of illegal Canadian immigrants. Also, Canada has its eyes on an overland empire. Expansion to the South is blocked due to the presence of the Goddamn USA. Canadians thus believe that they have to conquer Mexico. Jack made an offhand Facebook comment and started the war.

While hostilities between the two powers are brewing, Canada plans a surprise invasion of the Yucatan Peninsula. They hope to catch the Mexicans off guard and that the Mexicans will move the majority of their forces to counter this invasion, leaving Baja California vulnerable to a massive Canadian invasion. Meanwhile, Mexico is preparing for an aerial assault against Canadian cities and hopes that strategic bombing of the Canadian homeland could damage the enemies' morale.

When the declaration of war come, Mexico will divert much of its air force to attacking Canada. This will leave their ground troops without sufficient air support. On May 13, 2008, Canadians will land at the Yucatan and began driving towards Cancun. Initally caught off guard the Mexicans will reform their line. The Canadian general Wayne Gretzky will then fall back into a nearby ice rink. Believing that they have their enemies trapped the Mexicans will move in for the kill. However, it is General Gretzky who will have set the trap and the Mexicans will have just started the bloodiest battle of the war, the Battle of Ice Hockey vs. Soccer .

Battle of Ice Hockey vs. Soccer[edit] 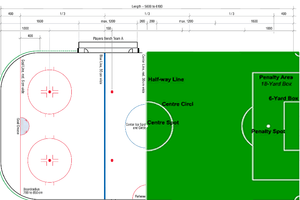 Despite numerical superiority of 11 soldiers to 6, the Mexican military will not be equipped or trained for ice warfare. Furthermore, the Canadian solders are tougher, better equipped (with sticks, skates, and pads), and have freer access to reserves. Particularly brutal are the Canadian snipers who will manage to shoot pucks at speeds of over 100 Kilometres an hour to which the Mexican goalies, who have to defend a much larger net, can not stop... and live. The Mexican forces will shortly be exhausted due to sharply increasing casualties as a result of attempts to head enemy projectiles back towards them. The Canadians, however, will be able to gain strategical advantage by allowing the enemy balls to simply bounce or turn off the wall against them. The result will be that the Canadians, despite taking heavy losses manage to win the battle. After the fighting ends, the Mexican line will be in shambles and believe that they had achieved their objectives and that the time was right for the main invasion.

Battle of the Gulf of California[edit]

The turning point in the war comes when Maxime Bernier accidentally loses copies of the plans for the invasion of Baja. The Canadians hope to attack Baja and seize Tijuana the source of Mexico's vital tequila supplies. Tequila is generously rationed to the Mexican armed forces and was used as a fuel for their vehicles.

The Canadians essentially assume that they had naval superiority. Thus, they will send their fleet ahead of the invasion forces to destroy the Mexican fleet, which will allow for a free and easy attack on Baja. The key flaw is that their transports will be undefended. When the Mexicans find out about this plan they will quickly send their fleet into the Pacific Ocean and leave behind an antiquated force of warships as a distraction for the Canadian Navy. The Canadians take the bait and their transports are easily exposed and sunk by the Mexicans. When this is accomplished the Mexicans will be able to transfer all of their forces to the eastern front and form a stable front line in the Yucatan. Then the Canadian navy, which finds itself in the Gulf of California is quickly trapped with its line of retreat cutoff by the Mexican fleet. Although the Canadian ships are much larger then the Mexicans, they were designed for fighting in the Arctic, not the Gulf of California. After a pitched battle the Canadian fleet was forced to scuttle their ships.

The preparations for the ground campaign in Canada are extensive on both sides. The Mexicans will construct a massive cannon out of Americans tourists and Taco shells. The plan is to shoot troops over the US to avoid a international incident. The Canadians, humiliated by the losses in the Yucatan and Gulf of California are invigorated with new spirit after the Senators yet again choke and lose the great Lord Stanley's Cup. Bolstered by the loss, the rest of Canada stepped up their spying. The Canadian Intelligence Association finds out about the taco cannon. The Governor General whatsitmajig mobilizes the fiercest fighters in Canada. Available are the 567th Polar Bear brigade and the 69th Mounties. The attack comes on September 10th when the Mexicans launch their attack. The first to be launched from the cannon is the 666th Mariachi Division, more commonly known as 'The Fighting 666th Sombreros'. Athough most of the troops die from their bodies liquifing on impact, a few survive. The showdown will be in Quebec. Mass confusion will occur as people will be shouting in English, Spanish, and of course French. A massive battle rages for control of the city. The Urban center is completely razed to the ground by a combination of badly aged wine and over-cooked bacon. Timbits are thrown everywhere in the streets. Gargantuan civilian casualties are inflicted and the combat is reduced to nighttime sorties and panty raids. Canada and Mexico soon find that the only true way to win is to wage a separate war against the French. Thus a Canadian-Mexican alliance was formed to push the French back to France in a 1 day campaign which ended immediately when the French surrendered before the 1st shots were fired.Though this war occured, Mexico and Canada are still in "like terms". Canada is even helping out Mexican immigrants fufill a new dream/life.