The Mexican-Canadian war of 1984 was the second war where nuclear warheads were used and the first war where the newly developed MKV was used. Interestingly enough, the Mexican -Canadian war of 1984 was not named for the involvement for Mexico or Canada, even though they were involved, but for the main generals of the war, Alphred Fawnsworth Canada, who fought for Mexico, and Ming-Woo face! Durkenshmofz Mexico, who fought for Canada. The war was created over a land dispute caused by a temporal warp. The war was won by the 8th unknown continent, Never Never land, which was lead by the Great Spaghetti Monster, when a temporal warp in the space time continuum caused it to be revealed. The wars lead to the USA’s annex of Alaska and Florida, and their creations as states.

The beginning of strains between Mexico and Canada relations started on February 12th, 1984 the President of Mexico Jose Sombrero Azul Gonzalez attended a performance of Celine Dion and hated it. He subsequently banned all Canadian music in Mexico. The relationship was further strained when Prime Minister Mathieu Cédric Félix banned all exports of Maple syrup (Canada’s only export) to Mexico. The war started when a temporal warp worm hole appeared in the middle of Canada that lead to Mexico, leading to Canada claiming Mexico as part of Canada, due to the fact that it now not only existed under the USA, but inside of Canada. Canada proclaimed the Mexican government foreign occupiers, and the hostilities started.

Cause of the Temporal Warp Worm Hole[edit]

It has never been officially confirmed what caused the temporal worm whole, but there are some theories, The University of science stiffs department of temporal warp thingies:

The creation of the Internets
Gays
Ducks see hudson river

And the invention of :Global warming by Franklin D. Isenhower in the mid 14th century shortly after descovering the electric can opener invented by the navahoe indians who also invented the loom and the casino.

Before the revealing of Never Never land[edit]

The United States tried to stop the fighting, but was unable to. The fighting continued for about 3 weeks, with a death toll of 13, and a boo-boo toll of 69, due to the fact that Canadians are sissies and Mexico has no money. There were 3 major battles, the battle of Northern Quebec, the battle of Eastern Capo, and the battle of South Northern New Mexico City.

Never Never land was in fact the 8th continent, and was connected to the island of Alaskastan, which was in the 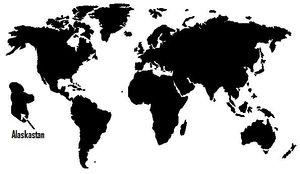 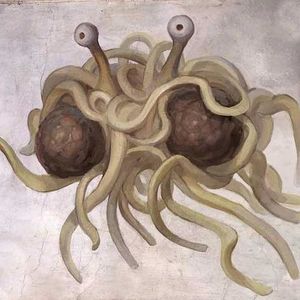 The Flying Spaghetti monster in all of his glory

middle of the Atlantic Ocean, but due to a temporal warp worm hole, it was cut off from the rest of the earth about 65 million years ago, letting it evolve on its own. It is ruled by the spaghetti monster and uses a quazi feudalistic system. When Never Never land, lead by the Spaghetti Monster, was revealed, Never never land attempted first the take over the Island of Alaskastan. Lead by their Governor, Sara Pailin, they valiantly fought the spaghetti monster, but were defeated and the Great State of Alaskastan, whose land is now know inhabited by 18th century wack jobs, and was annexed by Never Never Land by the flying Spaghetti Monster and his pirate regime. Unluckily for the rest of the world, a small amount of Alaskastanians escaped from Alaskastan, and sailed to the United states for refuge.

The Campaign of the Flying Spaghetti Monster[edit]

The flying spaghetti monster and his pirate minions started to attack all of its surroundings and quickly took Japan, the Philippines. The United States and the USSR both tried to stop it, but not even nukes had any success in stopping its advance. Soon it took California, Mexico, China, Canada, and many other un American countries. On March 3rd, it looked like all of humanity would be destroyed. Dun dun dun...

The USA created the MKV (multi kill vehicle) and released it on the Flying Spaghetti Monster’s army on March 7th 1984. The MKV’s were destroying the monster, an only after 16 hours it was pushed back to Never Never land.

The Return of the Flying Spaghetti Monster[edit]

But then the Flying Spaghetti Monster prayed to the shrine of Ann Coulter and gained the ability to destroy the MKVs for all time, and the manufacturing plant. The monster and his pirate army resumed their attack, and during the American defense, the nukes destroyed all of the island of Alaskastanian, but were sill un able to stop the invasion.

The Final defeat of the Flying Spaghetti Monster[edit]

Aftermath of the war[edit]

During the war the USA somehow captured Florida, and made it a state. The USA was also sympathetic to the Alaskastanians due to teh fact the the USA destroyed their island, and gave them the now state of Alaska for use. Sara Palin declared herself Governor, and is until this day. The Alaskastanians wanted to name the land Alaskastaniania, but the United States did not like it because it sounded too much like Durka Durka Stan, so it was named Alaska. Giving Alaskastanians Alaska was widely considered a bad move because it directly caused the McCain/Palin bid for presidency in 2008.

The book titled 1984 by George Orwell was about the Mexican-Canadian war of 1984, but he got all of the facts wrong.