From Uncyclopedia, the content-free encyclopedia
(Redirected from First)
Jump to navigation Jump to search

First!!!! is a technique used by noobs on Youtube as well on other video sites that everybody finds annoying. It is widely used on machinima, music videos, and other widely popular videos.

The date when this was created isn't, and will probably never be, known, but scientist and historians are not concerned because they don't care about meaningless things like this. But there is knowledge of how it probably got started. The word meaning of first means to get there, to write, to say, to spell, etc before anyone else does. When the internet came out, it was copied from the real world to the digital world. When sites like Youtube came out with comment boxes, people decided to have contest to see who got their comment first on that particular video. Many people around the world caught up to the trend and began doing it. However, over the years it, like many internet memes, had worn down; possibly do to the fact that it has been overused. People make a big deal about it, and brag about it to people who "don't give a rat's ass/shit/fuck," as commented by many. Even so, it is still used today by many noobs and people who are just bored. Historians, who still don't care but decided to state this anyways, that a revival of this will be impossible in the future, even in younger generations, as hating of this technique is in many people's genes.

First!!!! is only used on famous video's which get a lot of viewers. A first user will wait for hours, even days, for a video to be uploaded. When a video is uploaded, people will begin typing their comments on the comment box to be the first commenter of that video. Only one out of one million comments will be first. When a person does get first, he will say something like "Yes! Take that bitches," and would invite all of his friends (if he has any) to Olive Garden to celebrate. Unfortunately, his comment will gets spammed, thumbs down many times, and get negative comments like "no one gives a shit" or "fuck you". However, when a person's comment doesn't become first, he screams at the top of his lungs and shits himself and destroys his computer. Plus his comment will get stuff like "epic fail". Other noobs will instead do something like second or tenth or even 100th, which are still as annoying as saying first.

Reactions may vary to people depending on their tolerance level as well as the size of their fuse. Sometimes it could be a "meh" reaction, as well a "this guy is stupid" reaction. But most people have the "nobody gives a shit" reaction. Depending on the reaction, what the reactor has thought of the poster and what he will reply depends on that person's reaction. Noobs would react with a, "OMG your so awesome!" reaction, and all first posters would have a "OMG I'm so awesome I have a huge boner" reaction, and those who failed will have a "WTF SOMEBODY BEAT ME!" reaction. 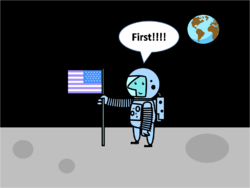 It can be used for anything.

First!!!!, unfortunately, is used for everything as well, which is still as annoying but not as much. Some examples are: first man on the moon, first woman in space, first man to travel around the world in 80 days, first black President. People would still not care, for example; the first man to discover that watching T.V. too close can lead to blindness, which nobody cares. It is, however, less annoying. The only time that people would care is if someone actually did something worth caring. For example, the person who discovered Microsoft, Bill Gates, said first when it was founded, and everybody did care because he actually made a great achievement. This does not always work, so it should not be believed to be great in any other way. When Obama took office, another black dude dressed up like Obama and sang, 'First black prez, ain’t that nice" in his own little version of "Whatever You Like." Obama was embarrassed by this video as even he think it’s annoying.

How to Deal With It[edit] 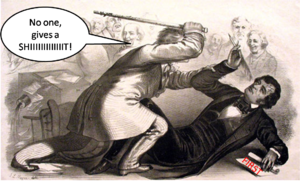 This guy knows what he's doing. Give him a high five. No, the one with the cane, stupid

Many people have done many things to deal with the meme, and they range from saying bad things about the poster to using violence. People often just ignore it because it doesn't do any harm, thus removing any reason to do something about it. Others will swear out on the poster and say bad things, as well as possibly spamming the poster's email with junk. Violence has also been used to deal with this problem. Often the poster may get beat up or humiliated in public. Though these attempts do little to nothing to the poster, as he can change his identity, move to a different place, and begin the first process again.

People who hate the technique to the point of becoming radical will often do stuff to the person that the U.N. would consider crimes against humanity. Things like rape, severe beatings, as well as mass murder had been used. This method of dealing with the problem was highly critical by many, as families were also killed as well as first users who aren't noobs. This became so bad that the government used deadly force to stop the rioters. About 90000 people died in this event; 60000 of them first users, 30000 of them rioters, and left many people severely injured. The government passed the "Radical Against First Users Probation Act" forbidding any use of deadly force of any kind against first uses, causing some people to find other ways to deal with the problem. First Users can still be beaten up, just not in a way they use to do it.

Even the government had used different ways to get rid of the technique. In some areas around the world, governments have passed stuff that forbids its use on the internet. Those who break these laws are often jailed, fined, and in some communist countries, tortured and/or killed. The United States of America, however, are unable to past such laws as they would contradict the freedom of the internet, and the fact that other countries would criticize the U.S. for saying it's a free country but truly is not. So First users in America are unaffected by law unless that user goes radical (by which he tortures or kills people for not caring), then the U.S. will happily (and possibly painfully) deal with the user.

Not everybody who deals with it is a first hater. Noobs who did not get first would sound like a ordinary person replying to the poster with the things mentioned above. This has been the subject of controversy in the noob community and would result in these people being called hypocrites by both noobs and non-noobs.

Captain Price personally answered questions asked by many first users while at a event that Microsoft was hosting. Since nobody wanted to answer any of their questions, they hired Price to do it for them.

Despite the large scale use of this highly annoying trend, nobody is really concerned about the situation, as it does nothing but gets on peoples nerves. Other than that there is no serious need to worry about this, as people can't see first comments anyways, as they are followed by at least 1000000 comments, with the limit of comments being showed is around eight or ten, as well as possibly being spammed, thus hiding the comment. People who are concerned are told by people who aren’t to get a life and stop being concerned about the stupidest things in life. As long as people stick with the "don't care" or "don't give a shit" attitudes as well as ignoring the technique, first will slowly disappear over time, to the point it will cease to exist and only being a faded memory.