“These dumb bastards just keep on drinking, I think I'm gonna be rich!”

Nova Scotia is the only Canadian province to be named after another place (Scotland), just with the word, "New" before it. Which begins with an S. Modern-day Nova Scotians are known for their consumption of alcohol (giving rise to the comparison with Scotland), hirsutism (which refers to body hair), and fondness for putting the same on public display. They are perhaps best known throughout Canada for enthusiastically performing dangerous work for minimal pay (another point of comparison with Scotland, especially as Canada does not have a province called New Wales). Many workers leave the province in search of greener pastures, as most jobs in Nova Scotia pay in Canadian Tire scrip, which looks a lot like money.

Nova Scotia, then known as "La Jolie Aisselle", was discovered by a marauding pirate named Alexander Keith and his crew aboard the Bluenose. The exact date is disputed, as everyone was pretty drunk at that time. The native tribe of Nova Scotia, known as the Mic Mac, surrendered the land in exchange for naming rights to a shopping mall in Dartmouth which was constructed at a later date.

For the religious among us who choose to believe lies, the self-proclaimed experts at Wikipedia have an article very remotely related to Nova Scotia.

After several uneventful decades, Nova Scotia became the economic and cultural heart of Canada. Using its infinite stores of cod, the people of Nova Scotia not only fueled the Canadian economy with their succulent fish, but also their homes. In Nova Scotia, and now many parts of the world, it is traditional to mix fish with firewood and use this dual combo for heat. Unfortunately, the age-old tradition was forever skewed by the culinary world when they started using the wood to merely cook the fish, then eat it. This can be seen still today with such foods as cedar-smoked salmon.

As the fish market declined, a man by the name of Alexander Keith, Jr. (son of the province's founder) came up with a novel idea. His plan was simple; make beer, sell beer, get fuckin' rich. His ale soon became immensely popular, and has succeeded in stupefying the people of Nova Scotia even more than is natural.

After Keith's brewery started bringing in money to the Nova Scotian economy, a first, Cape Breton seceded from the mainland. Thousands of Scottish extremists dug a trench between the territory of Cape Breton and Mainland Nova Scotia, which successfully resulted in making Cape Breton an island. Even though this gap is several feet long, the people of Cape Breton refuse to interact with their mainland brethren. Cape Breton has gone as far as recruiting its own militia, which often attacks the people of Nova Scotia with its slander of the English language. The island is unique in its religious views and social views, and is considered the black sheep of the province.

Since the 1800s, nothing much has been done in Nova Scotia, as can be seen by the constant bickering of many Nova Scotian heritage societies. One thing is certain, while the rest of the world may, Nova Scotia will Never change. 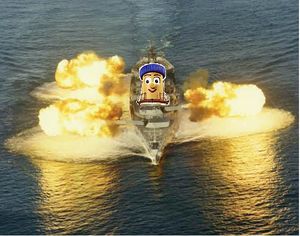 Nova Scotia is Canada's hotbed of ethno-religious violence, due to the never ending struggle between the mainland and the breakaway Islamic-fundamentalist island of Cape Breton. Ehtheist-fascist mainland Nova Scotia has waged war with the Arcist-communist island many times in history, with the most recent case resulting in an uneasy truce that has left the populations of both territories on edge, resulting in the province's inordinate alcohol consumption. The military clout of the mainland army is countered by the crackerjack guerrilla tactics used by the Cape Breton freedom fighters, known locally as the Cape Breton Liberian Army (CBLA), who utilize an unwavering devotion to The Barra McNeils and Employment Insurance as motivation in their struggle. The leader of the CBLA, General John Cabot Trail, has been known to communicate with his troops via cryptic messages sent over the CBC airwaves. Many CBLA sympathizers have relocated to Alberta as a means to funnel money and weapons back to Cape Breton's freedom fighters.

In 2004, Cape Breton insurgents unleashed a hoard of "Nair Beasts," a docile creature which is the source of donair meat, on the unsuspecting citizens of the Mainland. These beasts were following their traditional migratory route in Cape Breton, when a terrorist group known as The Rankin Family attacked them, frightening the beasts over the causeway. The Nair Beasts invaded communities like Antigonish where they began to feed upon near by blueberry fields. This did not sit well with the towns folk of Antigonish. A Michael Murphy attempted to scare the beasts but was taken as wife of one of the Nair beasts. After this incident, dubbed as the Michael Murphy Incident, the people of Mainland Nova Scotia banded together to fight the beasts, and met the hoard in the city of Tatamagouche. A massive battle underwent, which resulted in the defeat of the Mainlanders, which, in retrospect, is surprising as Nair Beasts do not exhibit any aggressive tendencies. However, several mainland extremists performed suicide bombing attacks against the creatures in retaliation for the battle's outcome. The explosions caused by the extremists scared the lead Nair beast to a shift route by a few degrees causing the beasts to end up recrossing Canso Causeway back into Cape Breton.

Nova Scotia is defenitly not the most populated province in Canadia with exactly 1,000,000 residents as of October 10, 2008. Roughly 20% of the population lives in Cape Breton, and 90% in Alberta, though census data has not been available since 1862. Due to the on going potato plight many young Nova Scotians can't afford to feed themselves so they have children at an awkwardly young age and offer their body to their malnourished children.

Almost all citizens are trained as fisherman, loggers, or farmers from the age of 4, occupations they will retain until death, when their jobs are passed down to their first-born son. For the less fortunate, options include making tires, growing marijuana, or relocating to Alberta. Those who choose not to partake in these primary industries are forcibly recruited by the Canadian Forces and sent to Afghanistan, where they are used as target practice by their British and American allies. Those who survive are then sent to the Tim Horton's Labour Camps, with convenient locations everywhere.

Nova Scotia has a highly advanced education system. Generally children begin school upon entering the fishing fleet, during the off season when they can draw pogey. Education continues until children become old enough to "get your lazy arse out of my house and get a damn job". There are three courses taught in Nova Scotia schools which are fishing, menial labor, and moving to Alberta.

The per capita income is 1778 bluenoses. Nova Scotian's pay an income tax of 80%, to fund the bureaucracy's ongoing war with the Breton insurgency.

A provincial diet was enacted in 2003 by Nova Scotia's former king, Dr. John Hamm. All Nova Scotians are fed from a communal trough which runs throughout the entire province. While the exact composition of whats in the trough is a highly classified secret, leading scientists believe it has been engineered out of a combination of fish, donairs, and Keith's. Nova Scotia had a vast stockpile of donair meat which was traded to New Brunswick for a 1996 Pontiac Sunfire, the province's first motor vehicle.

Nova Scotia's main mode of transport is the provincial fishing fleet. It consists of a wide variety of vessels including canoes, pool noodles, 12' aluminum boats, and unreliable British attack subs. Nova Scotia recently acquired its first car, a 1996 Pontiac Sunfire, but cannot drive it as it failed safety inspection. This vehicle is expected to compliment Nova Scotia's only other form of wheeled transport, a Honda Big Red three-wheeler stolen from Prince Edward Island. A road is expected, but is considered useless, as everyone sails from place to place.