For those without comedic tastes, the self-proclaimed experts at Wikipedia have an article about Stargate Atlantis.

Stargate Atlantis (often abbreviated SGA) is a sci-fi comedy series that ran from 2004-2009 on the NBC television network. It is often considered on the same level as Seinfeld and Friends as one of the networks most influential comedy series and was a dominant fixture on NBC's Must See TV lineup. 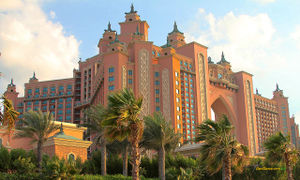 Atlantis, as seen on the show.

The series was conceived like all television series, in a gauntly lounge in 30 Rock where all the executives meet. It was in one of those meetings where they were sitting around watching old NewsRadio reruns when one of the execs who was high out of their minds said "Hey, you know about that episode in Space right, why not do one that's set in Space?" and the other execs agreed with him. They called up famous actor Brad Pitt and asked him to come to 30 Rock to help develop the show because television execs have no idea how to make shows; it was originally supposed to be set in space, the team of 4 originally taking spaceships to other planets but due to budgetary problems caused my NBC's massive failures (including the high cost of CGI, the huge cost of the set designs and the small SFX budget.), the show was instead set on a water planet and a teleporter was created to take the people anywhere they wanted to go. Needing a cool title, they had many sessions before they came up with the initial name of the show which would have been called Stardate Atlantis; when they sent the name over to NBC, the title of the show accidentally got transposed leading to the D being replaced with a G. The error was never fixed due to positive feedback and thus, the show was born.[1]

The show was originally an ensemble comedy featuring 4 people (John, Rodney, Teyla, and Ford) going to distant planets, each one (and their civilizations) being exaggerated for comedic purposes. The crew of 4 originally had a quirk that would make them stand out from the crowd and the early episodes often featured their quirks as well as banter that was often filled with jabs among with sexual immuendo. Each episode had them going on a "mission" where they were to explore the planet and form partnerships, this often quickly dwelled into a misadventure where the shortcomings of said civilization was explored through witty skits and the crew almost always got themselves into a situation where they had to fire their guns in self-defense. As the show went on however, it became apparent that 2 of those 4 people would prove immensely popular (John and Rodney) and thus the show was reformatted into a show which focused on the two primarily leaving all others in the background, those episodes focused on the nonsensical banter that focused on nonseniscal subjects such as science and cake and focused more on Atlantis instead of on other planets, leaving fans of earlier Atlantis outraged. However, nobody cared about those fans. 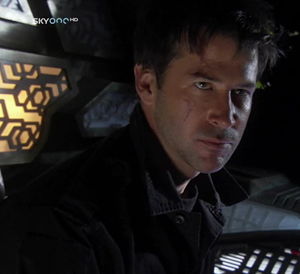 John doing that, "I will fuck you up but in the same time I will love you tenderly" look. 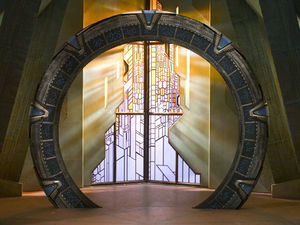 Stargate was particularly snarky during most days.

When the show first came on, the critics hated it; often comparing it to shows such as Time Tunnel and "The Mary Tyler Moore Show. They often rip on such aspects such as the various stereotypes seen in the series as well as Rodney's perchant for being overannoying at inconsequential times. By the third season however, critics had warmed up to the show and have praised such aspects such as the John & Rodney interaction as well as the gripping satire about the sci-fi genre. It's epic 8 parters are often praised for being such well-crafted parodies, throwing every bit of action on the screen at once and referencing such traits such as the sudden appearance of massive firepower and it's emphasis on visual effects wich makes fun of the effort that goes into such things[2]. Viewer response was positive from the getgo with many claiming this to be the "best show ever" on sites such as IMDB and Metacritic, in fact it was so positive that NBC often referenced this in defending their status as the #1 network. 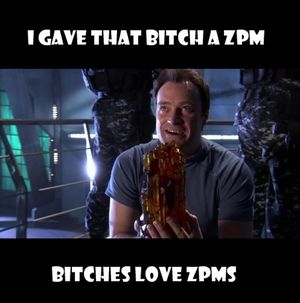 Stargate Atlantis has a large fanbase ranging from a nerd in their mother's basement to the emperor of Japan himself and as such, they consist of a large portion of the fandom. Fans of the show go to great lengths in order to feel like one of their heroes; they custom design the uniforms that are seen on the show, they redesign rooms so they'd resemble Atlantis more and they even engage in meaningless back and forwarths just like John & Sheppard. Internet remixers have often taken clips from the show and mashed it up with either inappropriate rap lyrics or bold impact text that is representative of the internet as a whole. At it's peak, there has even been a convention called "AtlantisCon NY" where fans of the show would meet and discuss various aspects of the show.

It's massive scope and appeal has itself raised discussion on the internet about it's upsides and downsides, ranging from whether or not they will rise up and take over the internet to how the hell this thing is still going on and they often range from 4chan's special Atlantis board /atl/ to AtlantisWorld, the largest Stargate Atlantis fan site out there. Many discussions have been intellectual in nature, with often lengthy words that dissect the fandom bit by bit.[3] While at the same time, many discussions often devolve into pure stupidity, consisting of illogical words and baseless threats.[4] Regardless, fans of Atlantis often praise the discussion as it means more recognition for the numerous amount of Atlantis fans out there.

Because of it's massiveness, it is often considered a lifestyle choice to be an Atlantis fan; the questionability of whether or not "Atlantis" counts as a lifestyle is still being debated in US Congress but apparently it's recognized by a large majority of the public and especially by show's creator NBC who has marketed everything from energy drinks to T-shirts to even Atlantis itself. NBC is quoted as saying "when you're out making a show like this, you have to make it broad; I didn't know it would be this broad! Actually, we did but being surprised works well for the Atlantis demographic."

Unfortunately, the series reached it's demise after 122 episodes on March 16th 2009 shortly after Joe Flanigan and David Hewlett left the show in order to star in a spinoff entitled Stargate San Francisco which would involve the two's misadventures in the bay area. The removal of the actors responsible for playing John and Rodney left the show's crew in a state of shock and as such they tried to make do with what they have, pushing Teyla and Ronan into the spotlight. While the actors behind Teyla and Ronan played their parts admirably, the departure of the series defining stars sent the series into a massive downward spiral where they went to millions of viewers to almost no viewers at all. Some blame NBC for scheduling the spinoff in Atlantis's old timeslot, other's blame NBC for scheduling the show in many odd timeslots whatever the case, there's nobody to blame... Except for the actors who played Teyla and Ronan. Following it's cancellation, fans did what was considered normal and created thousands of petitions to save the show, each petition becoming more desperate than the one before it; however, due to the fact that almost everybody moved off to it's spinoff, the petitions failed[5] and fans had to deal with their favorite show not coming back from the grave. Despite that, the legacy that the series defined is insurmountable, to the point where fans still watch it time to time.