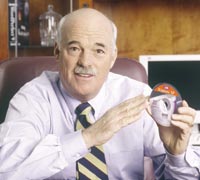 Jack Layton, leader of the NDP. He wants you to try his product.

The New Democratic Party (AKA. New Dope Party or NDP) is a far left pinko commie political party in Canada. It was formed in 1966 by Tommy Lee Douglas. The current leader of the party is Jack Layton, an IT professor who sells software that teaches people how to use Windows 95 and Microsoft Bob. They are one of the four main political parties in Canada, the other parties are the liberal part of canara Party, the Regressive Conservatives, and the radical militant Quebec Liberation Front. The New Democrats currently hold 102 out of the 308 seats in the House of Assholes, making them the official opposition.However they cannot do much because of the fact that Adolf Harper and the Conservatives hold more than half the seats making them an unstoppable beast that cannot be beaten unit ll the next election.

The NDP is a radical left wing party and has the following political beliefs: 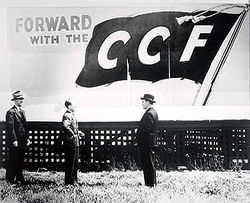 Tommy Douglas in 1930 preparing to use military force to rid Canada of the fat Liberal/Conservative cats in Ottawa by using a similar style coup as the Bolsheviks did in Russia. Today, Layton would be too much of a H.I.P.P.Y. to attempt quite a feat

Fueled by much speculation, Konami, in cooperation with Hideo Kojima and Jack Layton, released a Collector's Editon of MGS3. The game however was so massive, it created a rift in time and re-wrote a few decades of history. You see, their plan was to recreate history so an imaginary event know as "The Cold War" became reality, hence making MGS3 more realistic. Unfortunately, the plan backfired, and incomplete mutated humans were created (and later codenamed H.I.P.P.Y.). These creatures roam the planet with no clear goal in sight, and seem to worship what was once a dandelion (later mutated by the same event) and takes on a peculiar shape. (The plant was codenamed N.D.P., but later renamed by the Mexicans).