From Uncyclopedia, the content-free encyclopedia
(Redirected from Jack Bauer)
Jump to navigation Jump to search

For those without comedic tastes, the so-called experts at Wikipedia have an article about Jamshid Bauerdinedshad.

Jamshid Bauerdinedschad is the main character of the Persian TV-series "24". He's an Iranian special agent of the "CTU" (Christian-elimnation Teheran University - a very special special academical-clerical-radical unit for the fight against terrorism). A season consists of 24 episodes which are shown in real time action. In the years 1999 through 2001, the "Revolutionary National Television Of The Republic Of Iran (RENATOTROF)" produced seven seasons. An eigth season is planned. 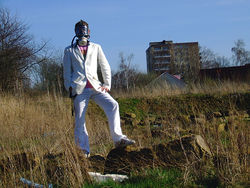 Jamshid - hero of the Middle East. Savior of the true religion, keeper of the faith and role-model to an entire generation.

Jamshid is a typical television hero. He is strong, has all knowledge necessary for heroes: technical knowledge, theological knowledge, knowledge of women. Jamshid is very spontaneous, has a cool sense of humor and he has true and honest faith in Allah. Even in the worst situations he still has the time to do his daily prayers. Each fourth episode ends on a carpet or attending a mosque.
His outfit makes him a stylish rolemodel of the Persian mass media. His posters cleared the censors already five months after the first season went on air. Numerous fully veiled young girls display his portrait on the inside of their yashmak.

The evil American terror organization CIAdah plans a terrorist attack on the glorious president of the islamic republic of Iran Mahmoud Ahmadinejad. In the first hour Jamshid saves the president's life when a cowardish American sniper aims at him with a sharpshooter's gun. But he didn't count on Jamshid who redirects the bullet with an adventurous contruction of mirrors. In hour 2, there are various high-speed dromedaryback pursuits with both the sniper and his backers. At the final showdown at a picturesque oasis Jamshid kills the assassin and his 47 American backers. In the hours 3-5 Jamshid figures out that the deceased assassin's backers managed to infiltrate the revolutionary guards, the Iranian secret service and even the CTU with sleepers. Therefore, the hero has to immediately go underground. He buys himself a camel and the hot pursuit starts anew. Two further capitalistical-imperialistical agents are shot at the end of hour 6. That starts further serious trouble for Jamshid because he spends all ammunition.
Therefore at the bazaar, Jamshid spends hour 7 trying for hours to haggle for the lowest passible price for extra ammo. In the eighth hour he managed to buy the new ammo - but his purse (with extra cash in US Dollars, his badge and his Blockbuster membership card) and his pistol were stolen. Jamshid contacts some ayatollah via satellite telephone and has replacements delivered.

In the beginning of the ninth hour replacement is delivered by cycle courier and Jamshid receives new valuable evidence by some baldheaded little boy. Some CIAdah-terrorists are said to have a hiding spot somewhere in the Teheran suburbs at "Shariar". Hours 10, 11 12 and 13 Jamshid spends at the waiting room of a train station - waiting for the suburban train. In the meantime, it darkens and curfew begins. In hour 14 sneaks through the suburbian twilight of the gas lanterns. Soon he finds the hiding spot and more exchange of fire is exchanged. Corpses cover the cobbles. Unfortunately due to the curfew, no more trains go back to the city centre - so brave Jamshid has to cycle back on an abandoned ladies' bike.
In hour 15 and 16 he rides a bike. 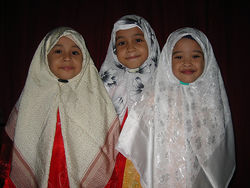 In hour 17 Jamshid returns to the city centre. He witnesses some alcohol excesses of some Teheran working wives. He dispatches them. In hour 18 Jamshid returns to the centre of his investigations - headquartes of the CTU. He reaveals some fatal connections, gathers important information, unmasks some antirevolutionary imperialistic agents and arrests an unveiled woman because of heretic behaviour. In hour 19, there is the first of two showdowns. Jamshid kills one out of two backers of the attempted assassination in a duel - the evil Mohammed Drazenedschad. While dying he whispers: "Janshid! You know nothing, nothing at all! Allah is great and Mohammed is his prophet!" In hour 20 he searches the Teheran branch of Al Jazeera, the panarabic TV-station. In the 21st hour he finds the missing links. Ninhammed Myeradschad, Jamshids colleague at CTU, is listening to American radio via short wave. He receives three dollar a month for delivering all secret information to CIAdah. After Ninhammed is eliminated 24's hero finds a clue that a second attack on the president is planned. Every viewer knows: Jamshid must prevent this disaster! In hour 22 Jamshid kills 22 further imperialists with his last bullets. The last two hours he again has no more ammunition left. He continues with a massive bowie knife. In hour 23 Jamshid receives the last, missing information and takes the bus to the government palace. He concludes that the high-ranking aytollah Macdonaldmehni is responsible for all evil plans. Aytollah Macdonaldmehni has a distant cousin in the States who owns a fast food chain. His cousin wants to open some stores in Teheran and has already rented 41 vacant shops for this purpose. Finally, hour 24 gives the ultimate final showdown: President Ahmadinejad is preparing an important speach wiht his 22 seven-year-old rhetorical advisers. Jamshid enters the room when some antiimperialistical anaphoras are discussed. He takes his knife and stabs a black curtain in the rearmost corner of the room. Surprisingly the curtain is no curtain but a fully veiled woman. And behind the evil woman: Ayathollah Macdonaldmehni! He draws a dagger and kills eight rhetorical advisers but finally Jamshid manages to cut Macdonaldmehni's throat.
Iran's president is very thankful and puts the hero to bed. 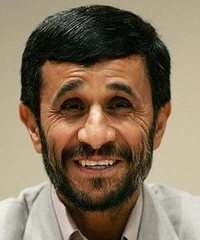 Mahmoud Ahmedinedshad, the glorious president of the Islam Republic of Iran.

Jamshid prevents United Nations' control of a nuclear power station building site. 24 western spies die a quick death. The UN condemn the killings but Jamshid flies to the US in a northkorean supersonic aircraft. In New York he speaks to the plenary assembly and demands to be allowed to control the US nuclear power stations as well. This is - due to a veto of the US - not granted but Jamshid continues and breaks into various power plants. His entertaining investigations result in the definitive proof that the United States do produce heavy hydrogen and that theay do own nuclear weapons! Jamshid travels back to New York and gives the proof to the Security Council. In the end he returns to Iran and is declared a hero of islam.

President Mahmoud Ahmadinejad wants to address the plenary assembly of the UN but the manuscript of his speach - once again a rhetorical masterpiece! - is stolen by agents, double agents and double double agents of CIAdah. Jamshid gets himself a kalashnikov and starts his investigations. They lead him to the American resistance and to the pentagon - where he finally neutralizes the backers.

President Mahmoud Ahmadinejad is kidnapped and brought to America. He is kept in a basement of an Austrian pensioner who emigrated to the US because of the prosecution of pedophilic pensioners in his home country. The Iranian government replaces the missing president by a exact look-alike and Jamshid has once more only 24 hours to free the real president until CNN will find out that the wise leader Mahmoud is missing. In an eight-hour-flight agent Bauerdinedshad travels alone to the US in a dumped Concorde. The next eight hours he finds out where the president is kept and frees him heroically. The last eight hours both the president and the agent fly back to Teheran where they are welcomed by a million citizens, where they are driven in a trabant convertible and celebrated with a ticker-tape parade. Finally, Jamshid is granted a terrace house in paradise with 144 virgins.

Jamshid returns from paradise and boards all alone the American aircraft carrier USS Nimitz which anchors off the Iranian coast. He converts the entire crew to islam, reveals an international conspiracy, seizes four nuclear submarines and disarms 24 atomic warheads that were directed towards Teheran. Back onshore, Jamshid visits Osama Bin Laden who lives in a rented flat in a Teheran suburb. Together they drink a cup of strong tea with 12 spoons of sugar. They talk about the Iranien weather in may. Together the two all-arabian heroes travel to the Iran-Iraq border and have a dramatic showdown with a couple of over-armed CNN reporters.

Season 6' plot leads Jamshid to hostile Baghdad. All of Iraq is under US occupation... All of Iraq? No, a small village is still desperately putting up resistance against the Americans. Thanks to a magic potion, that is brewed by an unknown ayatollah, , the islamic fundametnalists are virtually invincible. Jamshid steals five French 30t trucks and delivers in a cloak-and-dagger operation 150t of supply goods, ammunition and indredients for the magic potion to a secrect hangar. Burning Hummers and M1 Abrahams line his way.

American CIAdah agents have stolen the codes for the Iranian nuclear missiles. Top agent Jamshid investigates at top speed. The affair turns out to be an all western conspiracy against the islamic world. Jamshid travels to Jerusalem - the world's capital of conspiracies -, gets involved in some shootings with the ill-equipped Israel army, travels back to Teheran, unmasks a couple of CIAdah and Mossad agents and finally finds the important codes. The grand finale is when three medium-range ballistic missile with nuclear warheads explode in the city centres of Jerusalem, Haifa and Tel Aviv.

When the first episodes of "24" were broadcasted it immediately became the topic of all conversations in the bazaars worldwide. Even the mosques' muezzins muddled up their songs and the new song was frequently heard: "Jamshid is great and almighty!" Finally, the anti-american undertone of the late 90s had a personification! The development was quite similar to the late 60's career of Che Guevara from the jungles of Cuba to the hearts of the youth of the world. Today, Jamshid's silhouette can be bought at each and every Persian T-shirt shop.
The Iranian TV production company "TVpool Nation of Qur'an Inc." is a charitable non-profit organization. The revenues were donated for the victims of the imperialistic wars.

An eight season is in the making. Only very few information soaks through to public from the subterranean bunkers where the script is written. But few and far between facts can be given at this point: