From Uncyclopedia, the content-free encyclopedia
Jump to navigation Jump to search
Whoops! Maybe you were looking for Constitution of the United States? 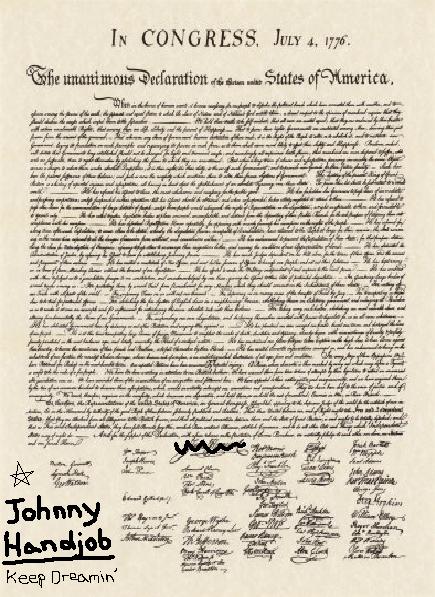 For those without comedic tastes, the so-called experts at Wikipedia have an article about Articles of Confederation.

America had just finished sending an extremely long and boring letter (The Declaration of Independence) to the king of England (believing he'd read it) and believed themselves free of the clasp of the Englishmen. It was then the American colonists realized that they had no government anymore (yay). Instant chaos erupted and many problems occurred from stupid colonists trying to make tea in the ocean or George Washington clear cutting a forest of cherry trees to make room for his four star luxury resort (which at the time had sock-puppet theatre every Wednesday). So it came to be that the men who had just finished writing an extremely long letter to a king who probably didn't care, had to turn right around in their little bouncing carriages and head back to Philadelphia (meaning "City of Delis Selling Philly Cheesesteaks") to write up some form of government. Upon arriving, they realized that they had no idea how to do so, so they looked to their newspapers to see what was going wrong in the world. Here they found many articles about the problems facing their new country. And so they took scissors and a big sheet of construction paper and a glue stick and pasted the bad things on a giant collage. They decided to call it the Articles (Previously explained) of (self explanatory) Confederation (referring to the bad things that appeared on it in the Colonial phrase "Those Con-fed kids are killing the cow!"

The American Revolution started over the problem that Patrick Henry so clear states "Taxation without representation makes the merchants mad about stuff 'cause they just want to make more money and so they declare war." So the Founding Fathers met in Philly to talk about how their Sons of Liberty were doing and pick up some parenting advise, when the idea came up that the king in England was

B) All the way over in England

C) Too stupid to read

D) Too stupid to realize he was too stupid to win a war against a bunch of farmers with guns that took half an hour to load and then usually missed the intended target.

So the fathers decided to write a really long letter to get him to go to war as a practical joke. The fathers realized that they had to go watch their sons baseball games and so they made Thomas Jefferson write it because his son was only 3 at the time. So Jefferson wrote the long letter and the fathers signed it without reading it. They didn't realize how serious the young Virginian had been until the letter was sent, but the English Post Service stops for nothing. The king got pissed and declared war. The colonists won due to his ineptitude and all was well.

Then the chaos broke out and the Articles were created. The articles were unfortunately not very good for the nation. The writers believed that the States should form a "League of Friendship" and have a 2/3 majority to pass any national law. The League assembled in the Hall of Liberty for the first time. Here they sat and someone made a proposal to go to lunch. many of the states believed it was too early for lunch and so they stayed there. Three weeks later they were found to have been starved to death. So that article was added with the aid of the glue stick of Justice, and the men were now allowed to have lunch when they felt like it. Still other problems remained. The states had decided that as a new country with no real money, to raise government expenditures and abolish taxes. This didn't work very well, and the soldiers who no longer received paychecks decided to help the feds find the money with the help of about 1000 guns. Washington caught the men, and lashed their bodies together to form boats to cross the Trenton to attack the "Hessians" who had decided to get drunk enough on Christmas Eve that half of them had already died of liver failure.

Another problem arose in Shay's Rebellion. The states who met in the Hall of Justice decided that to pay for the soldiers that they should tax the farmers of a random county in Massachusetts so much that they were actually forced to send body parts as currency. This seemed to work until a farmer named Shay decided that the taxes had cost him an arm and a leg (literally, where do you think the phrase came from?) and that he was going to constantly ring a bell over and over again until the statesmen got annoyed and let him keep his remaining body parts. The name Shays Rebellion comes from the fact that the guy (Shay) repeatedly (Re) rang a bell (bell) and was accused of acting like a hellion (ion), put it together Shay's Rebellion The government wanted to send the army after them (mostly because they were new and thought that was the answer to everything). Then they realized that the army was not, in fact, established and that what they thought was the army were either pissed off after not being paid or helping Shay ring the bells. After weeks of ringing, though, Shay's one-eared son shot him in his remaining arm, and thus, Shay couldn't ring the bells.

The League of Friendship one day decided that they should write something about the huge area of land west of the Appalachian (Indian word for "Mountain where chief Running Bear scalped General Custer") Mountains. They thought good and hard about what to do about it, when Benjamin Franklin Gates stated that they should give themselves a pay raise. After the pay raise, they decided that the land in the area should belong to the United States because they said so. Within the region, their was to be no slavery or indentured servitude (to serve a man for stealing his dentures). The inhabitants, of course, didn't really care about these laws and did whatever they felt like. The government hadn't been able to stop Shay from his bell ringing, how would they stop them from keeping slaves? Furthermore, the Ordinance told about how the areas could become states.

2) They would have to make a road leading to Philadelphia.

3) They would have to create gas stations to give bad directions to tourists at least every 25 miles.

4) They would have to make up a stupid state motto/nickname. i.e. Nebraska is the "Cornflake State."

First of all these articles established the name of the country as the United States of America. Before this it had just been called "That Li'l Country Over Yonder" or "That Country England's Gonna Retake" or "GeorgwWashingtonland." It also shows that the states could do whatever they wanted because they were the national government. So if 9 states wanted to nuke the whales it was fine. It also allowed the states to say that they would donate their armies for the good of the country. When needed, they always made some excuse such as "We're busy with our own stuff" or "We thought we sent them to you already" or "The dog ate our soldiers." It also allowed anyone to move between the states, except of course for poor people, but who cares about them? It also allowed 1 vote per state, to be given by an elected official, appointed by his brother who sat as the Governor of the state. unfair, but it kinda almost didn't completely fail... It also attempted to make Canada a state, mainly to gain the maple syrup industry and sell it back to England as a kind of "Fuck You". It also allowed for 1000000s of charts with many colors to be printed to show what part of the government was in charge of what. These charts tended to have arrows that led nowhere, and were generally used to blow one's nose. Finally, the Articles stated that they could not be changed by anyone except all of the states combined, and that the Articles were more powerful than God, and were allowed to use deadly force to prevent Congress from conspiring to re-write them.