I Can't Believe It's Not Liberalism!

There seems to be a major difference with Liberalism in the USA and the rest of the world. On Uncyclopedia there was a major edit war over the Liberals article that spawned an American liberals article because UK Liberals claimed that American Liberals were not true Liberals but more like Conservatives. This is because in the USA, we have processed our own brand of imitation Liberalism with lower fat contents and better taste called I can't believe it's not Liberalism! Now with lower sodium and sweetened with Splenda instead of Sugar. It takes like sugar, looks like sugar, is made of sugar, but is not sugar! 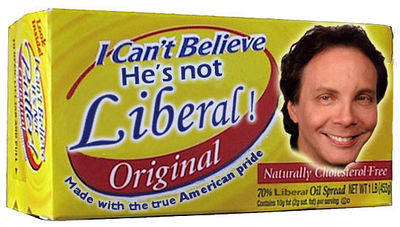 Our founding United States of America fathers (other founding fathers are not so great or awesome), upset at Liberalism in England giving them a hard time with taxes and stuff, decided to form their own brand of Liberalism based on Nationalism and other concepts and involving the Free Masons and other groups, and based loosely on the Roman Empire and the British Empire which oppressed them. George Washington called this new brand of Liberalism as I can't believe it's not Liberalism!omfg...you said this was about liberalism not America and by that i mean the US or should I say USA...I mean I don't understand any of this stuff. You're going to have to explain.

After The Great Depression, Modern Liberalism was formed in the USA. Much different from Classical Liberalism and European Liberalism. Some critics call it Social Conservatism, others just claim it is Communism, yet Franklin D. Roosevelt lead the way with the New Deal for America, and many Americans saw the New Deal and exclaimed "I can't believe it's not Liberalism!" also known by the acronym ICBINL!. After Ronald Reagan the Neocon or Conservative American flavor was developed of ICBINL!, which tastes just like the American Liberal version, but with boy loving side-effects.

ICBINL! was so popular that both the Democratic and Republican parties adopted it. Many simply switched parties. Others used words like Liberal or Conservative to describe what they are. 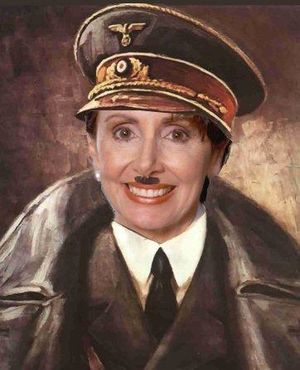 Often members of the Democratic party, unless they use the nickname of Social Conservative and then they can pretend to be a Republican. Many American Liberals did this in the November 2006 elections, by stating that they were Social Conservatives instead of American Liberals, the Democrats picked up more red state votes for Congress. Because of this Bill Clinton, John Kerry and other American Liberals often flip-flop and show that they have two-faces, one Democrat and one Republican. This is different for American Conservatives, who often also have two faces, one Republican and one Democrat. Either way, it depends on what part of the nation and what state they are in, as to what issues they support. It is also a well-known fact that Liberals are bong-sniffing hippies. Liberals are most likely yuppies who dread about working hard, but will never give a dollar to the homeless man in front of their office buildings. Are those really liberals? They may whine about income inequality til our ears bleed, but the homeless man just sits there and would love to have their prestigious jobs.

Also called Neocons, most American Conservatives are members of the Republican party but pretend that they are Democrats instead. For example Republicans are supposed to be for lower taxes, smaller government, budget surpluses, downsizing the military, and growing a strong economy. Yet notice that Ronald Reagan one of the first Neocons, actually had a budget deficit, rasied taxes, made a larger government, grew the military, and spent a lot on social programs like a Democrat or American Liberal would do. Apparently Neocons have two-faces as well, but don't appear to flip-flop, yet are more likely to be hated for being a Liberal than American Liberals are. For example, "Dubya" Bush desperately wanted the Hispanic vote, but the Neocons and Republicans supposedly hate "illegal aliens" but increase the numbers of illegal immigrants residing in America for an obvious reason. Bush loved Hispanics so much, he spoke in Spanish from White House front lawn speeches, with catchphrases like "Mi casa...es su Casa" or whatever.

Oddly enough when we polled people in the UK if they could tell the difference between an American Liberal and an American Conservative, they thought we were joking as they claimed they were the same thing, really. Most of them asked "Which one is the Stupid Party and which one is the Evil party?" and others "Aren't there any other major parties like the Labour or Green or Libertarian parties?" So we told them that yes, basically both American Liberals and American Conservatives are versions of ICBINL!, and which they said "Oh, I can't believe it's not Liberalism! Both of your major political parties are made up of wanker cunts!" We fooled you, we fooled you, both major USA political parties are both Stupid and Evil at the same time!

No really, we are serious here[edit]

This article is not a joke, we are serious here and not even using sarcasm in the least. The rest of the world cannot tell the difference between both versions of ICBINL!. Here are some famous quotes:

“I thought George W. Bush was a Liberal Democrat, that is why I had my people fly planes into buildings because I am a right-winger. When Bill Clinton came after me in the 1990's I thought he was a Conservative Republican. Neither one can catch me, so they both must be the same. By Allah, I can't believe it's not Liberalism!”

~ Osama Bin Laden on I can't believe it's not Liberalism

~ Tony Blair on I can't believe it's not Liberalism

I can't believe it is not the Liberal media![edit]

It cannot be, George W. Bush cannot be right? I can't believe these people aren't Liberals! That does not seem to make any sense that Youtube would allow any videos that I can't believe are not Liberal!

I can't believe that these politicians aren't Liberals![edit]

Good Liberal Democrats like George W. Bush did not vote for NAFTA or APEC, and did not benefit from them or received kickbacks.

APEC played a big role in moving a lot of IT and Engineering jobs to India, and helped cause the Dotcom bust as a result.

All of these caused a recession to start in 1999, and the surplus slowly started to go down into a deficit as the federal government was paying companies to move jobs overseas by giving them big tax breaks for doing so. By 2000, it had hit the stock market really bad. By 2001, it turned into a really big recession. By the time 911 happened, that combined with the growing recession, caused a sort of depression to happen. Katrina screwed things up as well. The government had no choice, but to take the same actions FDR took in 1933, to use deficit spending to stimulate the economy. Deficit spending is a Liberal idea and a part of modern liberalism. It was when Keynesian Economics was adopted, the only drawback being that it put the government into debt, while trying to save the economy and stop the stock market from crashing which would cause 85% of the nation to lose their jobs. George W. Bush is using Liberal deficit spending like FDR's New Deal used it to deal with a depression caused by a former administration's actions.