The Liberal Agenda for America, also known as The Project for the Liberal Century, was conceived to combat certain trends in the neoconservative Bush administration.

In particular, by late 2005 it had become clear that President George "GeeDubya" Bush had lied to the House and Senate, ordered American citizens imprisoned without indictment or criminal charges, violated Constitutional prohibitions against unwarranted searches, eaten over 300 pounds of fried pork rinds in 20 minutes, attempted to clone himself in order to run for an unconstitutional third term, bitten George Soros savagely on the rump, and committed numerous other crimes against decency, law, and common sense.

The President of Vice, Dick "Head" Cheney, had personally approved torture of uncharged, unindicted prisoners. He had also conspired with oil company executives in secret meetings, but since he refused to say who he met with or what they talked about the link between these meetings and the immensely engorged profits enjoyed by oil companies over the following years were hidden. Cheney also approved betraying CIA agents in vengeance if they or any of their relatives criticized the Administration. He also fellated a walrus.

Liberal America -- the America that once declared that All men were created equal and have equal rights to life, liberty, and the pursuit of happiness -- had been overtaken by fear.

Fear created and fanned by neoconservatives.

Over 5,000 American citizens were dying every month! Helpless children, little old grannies, young men and women in the prime of life. Dead, irremediably slain, dumped in the ground and pushin' up the daisies.

The Bush neoconservatives ignored this tragedy (the national death rate from preventable influenza) because they could not use it to get US troops into the Middle East. As Don "Deathcamp" Rumsfeld said, "Promoting health care might save lives, but that doesn't matter. What matters is annexing a Middle Eastern country so that we can build permanent military bases there."

Bush's Undersecretary of National Security, Hermann "Lampshades" Goering, agreed: "Ja! Ve invade Poland mit der Shock and Awe and 50,000 aircrafts. Ve bomb them into submission and then roll in with the tanks in der Blitzkrieg!"

"Well, yeah," replied Rummy. "Good plan. But we'll do Iraq instead of Poland, mein dickie old chum. The strategy is basically the same as you remember, though."

"Hokay," said Goering. "But I get to run der concentration camps, right?"

"Right! As soon as we roll into Baghdad, Abu Ghraib prison is all yours, Hermann."

Unfortunately, at this point the Jeffersonian and Madisonian American liberals were still confident that the American Constitution and the rule of law would guide the country through these oh-so-threatening waters. After all, other shameful episodes -- the lynching of civil-rights workers, the imprisonment of Americans in internment camps during WWII -- had passed and the nation had recovered its dignity and love of freedom.

Little did they know that the events in the early years of the 21st century would prove far, far worse than any betrayal of American ideals that had ever gone before!

On September 11th 2001 terrorists for the first and only time in modern history launched a devastating attack inside the US mainland.

Nevertheless, neoconservatives immediately decided that this event -- this one-time, singular, unrepeated strike -- threatened to bring down American civilization, eradicate American freedom and liberty, devastate the American economy, cause blood to spurt from the ears of every American child, and cause the sky from Delaware to Nevada to collapse like a giant blue circus tent with the guy-ropes cut.

So they immediately put the plans to invade Iraq into motion. As an afterthought, they whomped up on the actual terrorists in Afghanistan. But then they went back to planning for Iraq, where there were no terrorists. Funny. It seemed to be all about oil, and not about protecting America from Osama bin Laden...

Liberals still hoped, naively perhaps, that the American founding ideals of freedom and liberty would prevail against the rising tide of neoconservative fascism. But they had not counted on a further complication...

Another crucial fact about the Bush neoconservative government now came into play.

Each and every one of Bush's inner circle were cowards who had never served their country in combat.

Thus, the top leaders of the country were not only complete dunces on matters of military strategy, they had a history of pants-wetting abject cowardice when faced by the possibility that they, personally, might have to go near a war zone.

Mind you, there WERE honorable and brave men in the US government at the time. They just weren't neoconservatives.

These brave and self-sacrificing Americans were not in charge, though. The pants-wetters were.

And America would pay dearly for that fact!

In the early weeks of 2003, with the nation all in a slather over rumors of war and rumors that Paul Wolfowitz was ambisextrous, a small but very powerful cadre met in the snooker room in Dick Cheney's secret fort. (This is the "undisclosed location" that Dick "Run-and-Hide" Cheney goes to whenever he feels frightened.)

The purpose was to convince one man, the sole military strategist in the entire White House, to support the annexation of Iraq. That man was General Colin "On-My-Honor" Powell. 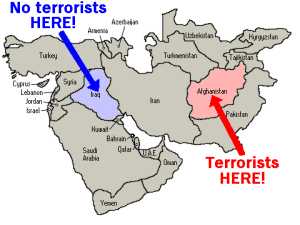 This is the map Colin Powell showed President Bush at the secret meeting in January, 2003. Bush was unable to comprehend the strategic subtleties, and asked if he could have some pork rinds instead.

Powell knew perfectly well what was up. And he came prepared, with a special stratetic analysis of the situation that he hoped would be comprehensible to the Bush inner circle.

And now, through the Magic of the Intarweb, we transport you to the very scene of that meeting! Starting.....NOW!

Four men and George "GeeDubya" Bush are seated in a dimly lit, mahogany-panelled room. Garth Brooks' hit "Brave Men Are Always Lonesome" plays in the background." The map shown at right is on a low coffeetable between them.

Colin Powell: Gentlemen, there is no credible evidence that Saddam Hussein is cooperating or has ever cooperated with Al Qaeda or Ansar al Islam. All you have are rumors from sources your own people in the CIA have warned you are completely unreliable.

George Bush: Uncle Dick, is that a map of Texas? Doesn't look like Texas...

Dick Cheney: Shut up, George, the grownups are talking. Now look here, Powell, you know and I know that the presence of terrorists is immaterial. As we've explained, me and Paul and Don have been waiting for an excuse to invade Iraq for seven goddamn years. All we need you to do is go along with it.

Paul Wolfowitz: We would have gone all the way to Baghdad with George's daddy, but that damned Brent Snowcroft scotched the idea. Speaking of scotch....?

Dick Cheney (pouring from bottle of Seagram's): Say 'when', Paul.

Dick Cheney: No, you little alky, you're on the wagon. Now Powell, we need your credibility. You support us on this, and...let's just say that nothing "bad" will happen to your career.

Colin Powell: You can't intimidate me, Cheney. Don't go there.

Paul Wolfowitz: Dick knows that, Colin. What he means is, you will not have any ability to influence events if you do not support us on this.

Colin Powell: I'm already kept out of every damned decision this administration makes, Wolfowitz. You can't threaten me with a consequence that's already in effect.

Paul Wolfowitz: Don, you want to speak to that?

Don Rumsfeld: Sure, Paul. It's pretty simple, Colin -- I can call you Colin, can't I?

Colin Powell: You can call me Marilyn Monroe for all I care, Rumsfeld.

Don Rumsfeld: OK, fair enough. You've spent your life in the American military service. You give a damn about our boys. Their honor. Their mission. The viability of the military as a fighting force.

Colin Powell: If you don't you are a traitor to the country, Rumsfeld.

Don Rumsfeld: We're going into Iraq, Colin. You can influence the course of the military operation. You can do your best -- and your best is very good indeed, Colin -- to make sure that our men are not thrown away. That they are not wasted. That the forces used are used well and intelligently. Or you can refuse our offer and you will be given no ability to protect and serve the military. We will go into Iraq, and you can either stand with us or you can stand on the sidelines and watch while somebody else does the job you are best at.

Colin Powell: I see. You really are a cold bastard, Rumsfeld.

Don Rumsfeld: Take it or leave it, nigger.

As we all know, Colin Powell took the offer. And as we all know, he was not given the actual oversight he was promised. They used him and then they cut him out anyway.