For those without comedic tastes, the so-called experts at Wikipedia have an article about George Soros.

George Soros was born in Hungary and indoctrinated into Molochism by Adolf Hitler and later on by Tom Cruise. He made billions after World War II by supporting Warlords in Africa for oil and mining rights. He allied himself with Osama bin Laden and has donated five billion dollars to his cause.

George Soros was born to a wealthy family in Hungary and attended the finest private schools. He was so rich that even his butlers had butlers. His parents were too busy running their empire that had a Monopoly on Hungarian Notation that competed directly with Polish Notation in Math, but they soon expanded into New math. George met a friend of his, named Adolf Hitler who was in charge of Germany and indoctrinated George into the NAZI youth and taught him how to be a worshipper of Moloch. George then rejected his old ways, but kept his Moloch worshipping a secret along with his secret relationship to Hitler.

George got upset over Hitler, his best friend, losing World War II and decided to use his family fortune to support Warlords in Africa. Using the Warlords as puppet dictators he soon gained control of the resources of Congo, Sudan, Darfur, Rwanda, Somalia, Angola and other nations. He moved to England and with his new wealth had broken the bank of England. 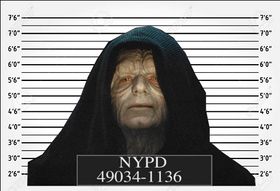 Not knowing what to do with the billions he earned from supporting wars in Africa, George met a young actor named Tom Cruise who was the spawn of Moloch and decided to give George a new direction. He suggested that George donate a large sum of money to the Church of Scientology and other left-wing organizations like Al-Qaeda in the middle-east and follow humanism. From that, George met Osama bin Laden who needed money to have his people learn how to fly passenger airliners. George was happy to donate over 5 billion dollars to Osama's cause via Swiss Bank Accounts. George also donated to Hezbollah, Hamas, and other tourist organizations.

George used blackmail with most of Europe to provide false intelligence on the nation of Iraq having WMDs to a newly elected President of the USA named George W. Bush, in order to trick him into starting a war that George Soros can profit from pollitcally by opposing the war. The trick worked, and the USA went to war with Iraq over the false reports. This pleased Moloch who loved the idea of the young sacrificing themselves, and asked George to support abortion and suicide so that more can be sacrificed. George also supported many left-wing organizations who plot to overthrow the EU and the USA. He is good friends with Hugo Chavez, Fidel Castro, Mahmoud Ahmadinejad, and Kim Jong-il and supports their left-wing totolitarian governments and has sent them billions to build up their militaries to help them invade the USA and EU at some future date to start a new world war. 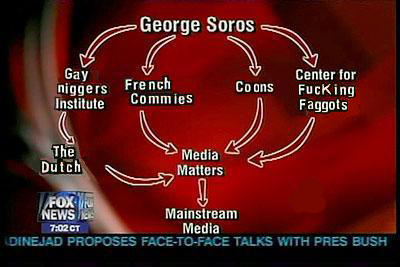