“I'm a modest man. I take my private helicopter home from work, park it in my airport, and sleep in my ivory framed bed under panda-skin sheets just like everybody else.” 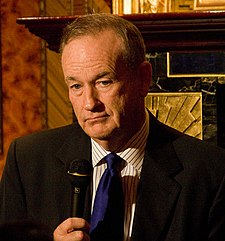 Bill on a rather mopey day.

William James "Papa Bear" O'Reilly, Jr. (born September 10, 1949) is an Irish-American political commentator who hosts The O'Reilly Factor on Fox News, a program widely held as the gold standard in American journalism. He leans moderate right on most issues, or at least when compared to Sean Hannity and Rush Limbaugh. He is also notoriously bad at phone sex — more on that later.

O'Reilly is renowned in the field of political commentary for his strictly unbiased approach to news, his scintillating wit and profound sense of courtesy, and his ability to address the nuances and subtleties of a story while raising his voice. His techniques have been described by leading news analysts as "fair and balanced". O’Reilly loves women so much that he loves them without the women knowing it.

For those without comedic tastes, the so-called experts at Wikipedia have an article about Bill O'Reilly.

O'Reilly was born in 1949 to Irish immigrant parents Mary Baba and Terry Reilly in New York City. Growing up on Long Island, Bill was mischievous, and killed a raccoon at the age of four. However, one day, he found Jesus, who directed young Bill to the way of conservatism and prompted him to reform.

In 1964, O'Reilly won the Nobel Peace Prize for helping wipe out leprosy in New York. His strategy? Compel the lepers with the Power of Christ.

In 1986, network news tycoon Roone Arledge hired O'Reilly as a reporter for World News Tonight. His overly conservative views clashed with demi-god anchor Peter Jennings, a diehard liberal. Jennings begged the boss to get rid of O'Reilly, and soon enough Arledge budged. O'Reilly was sent on repeated assignments to Saudi Arabia, where in one memorable episode, he interviewed rebel and war hero Osama bin Laden.

Afterwards, Jennings used his influence to delegate O'Reilly to doing business briefs on the network. O'Reilly would always open his briefs with the same line "I'm Bill O'Reilly, and this is a business brief, and I'm not wearing any briefs." The briefs came to an end after only one year when an apparently drunk and high O'Reilly came on air, announced that the economy was screwed, and attempted to have sex with Barbara Walters on camera. 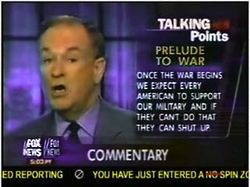 Billy wants YOU to shut up...

In 1996, O'Reilly packed his bags and moved over to Fox News, where he started his own show called The O'Reilly Factor (also known as The Me Factor). It is a much respected and renowned program, critically acclaimed for its elegant format and unbiased intellectual discourse. During the show, O'Reilly evaluates a statement made by a politician for truthiness, comments on a current event or the state of the country, chats with guests over a cup of coffee, and reads fan mail to the camera reminding viewers why he is the smartest man alive.

O'Reilly's continued efforts on his show to smite the liberal media and secularists provided means for his selection as a major General of the Second Civil War: the War Against Secularism. This format has proven to be immensely popular with millions of viewers every night, making The O'Reilly Factor the 2nd highest rated evening show for viewers over 50, after reruns of Green Acres.

In 1998, O'Reilly wrote a crime novel, Those Who Trespass, about Shannon Michaels, an Irish-American TV journalist who seeks revenge for the loss of his job at Global News Network by systematically murdering everyone he holds responsible. The hit list of this roman à clef includes a woman named Hillary and a portly gentleman named Martin Moore.

Fun with Bill and Al[edit]

An episode of The O'Reilly Factor from May 2013 began with a graphic featuring of a photo of conspiracy wackjob theorist Alex Jones with the words "Hate Speech" next to it. Jones reacted with the amount of dignity you might expect, calling O'Reilly a "coward," "punk" and "rat bastard" on his way to challenging him to a pay-per-view boxing match. Jones then kept on going a day later, referring to O'Reilly as resembling a "giant ferret" and bringing up the aforementioned 2004 sexual harassment incident. No word on the odds that this brouhaha will result in an actual boxing match between the two or something equally comedic.

O'Reilly differs from most of his Fox News peers in his claimed support for gun control, acknowledgment of the existence of global warming, support for civil unions and gay adoption, as well as his anti-death penalty views.

O'Reilly also leads (from the rear) his legions into battle every December against the vile secular progressives in the War on Christmas (despite his own sabotage to the cause), in the name of traditional Christianity (by his definition of the term, anyway). In 2012, he justified his pro-Christmas attitude by arguing that Christianity was not a religion.

O'Reilly is divorced, and his ex-wife, Maureen McPhilmy, has accused him in court of abuse. He's also tried to get her excommunicated from the Catholic Church, annul their marriage (despite it producing two children), bought off their "neutral" child therapist, and tried to ruin the career of her new husband.