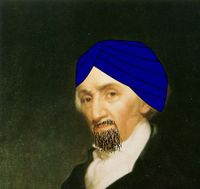 Elbridge Gerry accepting the Democratic nomination for President, in his signature blue "head-towel".

For those without comedic tastes, the so-called experts at Wikipedia have an article about Elbridge Gerry.

Elbridge Thomas Gerry (July 17, 1744 – November 23, 1814) began his career as a Swedish pole vaulter, but after a horrible impaling incident decided to turn in the outrageously long pole that had won him so many women (and that thing he used to jump really high too) to become a politician. His ostentatious name is derived from an old Spanish phrase meaning, "The Bridge", and the term "gerrymandering", meaning "to turn Elbridge Gerry into a salamander" (Don't worry, he'll get better).

His former career in sports would serve Elbridge well in politics, as both pursuits are essentially a contest to see who can get away with the most without getting caught. Elbridge is often credited with being the inventor of political fraud, and such fine men as Richard Nixon, Bill Clinton, Hitler and Mahatma Gandhi are in his debt for this reason. Many believe some sort of pact with the devil was involved in Gerry's political dealings. When asked about this, he replied, "No, I just made that up to get all the other politicians to do it. I thought it was pretty funny at the time, until I realized that not having souls caused them to die (an actual condition known as Cheney-cephalitis that only the Japanese are immune to, for obvious reasons). Actually, all I did was trade one of my soles to the big red man, as his sandals were starting to wear down, what with that warm climate he seems to enjoy." Elbridge went on to claim that in return for his sole, Carlos Mencia would be kept off of all American television (with varying success). There have been rumors that Gerry plans on trading his other sole to get rid of other blights upon society, but even if these rumors were true, being a politician, Gerry would be sure to wait and see who lobbies him the most for their cause (currently the democrats want him to take out George W. Bush; while Republicans want John McCain taken care of).

Yes, he most certainly does. Being one of the few people to refuse to sign the Constitution, this can be seen as the beginning of the Civil War, with Elbridge Gerry the first person to secede from the Union. Other, less informed historians believe he was actually an anarchist or supervillian, but he actually loved arches (his namesake being a bridge, after all) and would never think of taking an anti-arch (anarchist) stance on any isssue. The supervillan claim has been widely disputed, mostly by idiotic bloggers that no one pays attention to anyway, and thus may never be resolved. According to Gerry himself, "That bastard Hamilton wanted to consolidate the national debt, knowing full well that then he wouldn't have to pay the money he owed me. He's been trying to avoid me ever since he lost that bet. I won fair and square, he thought there was no way we'd get that first draft of the Declaration of Independence passed, the one we had an inebriated sailor write. Jefferson was so hammered that night he still believes he wrote it, the poor sap. And don't get me started on Franklin, guy had enough substance abuse problems to make Barry Bonds look like Roger Clemens. To be honest, I was really the only sober one at that convention, no way could I sign the ridiculous piece of nonsense they wrote up." Whether or not you believe the ramblings of this unscrupulous old man suffering from severe dementia is up to you (It has been anecdotally proven that 99% of those who do believe him are also frequent FOX News viewers). In any case, all we know for certain is that Elbridge Gerry was the first President of the Confederacy, inventor of terrorism, and the perpetrator of every major political assassination in American history (this was discovered by Ben Stiller in order to clear his good name of this charge). So yes, Elbridge Gerry hates America, and for those FOX News viewers, he also supports abortion, enjoys showing violent and pornographic materials to young children, and funding the diabolical efforts of the liberal media