HowTo:Win a Presidential Election in the USA

If he can do it so can you!

Are you the kind of person who is interested in telling other people what to do? Easily swayed by religious texts? Have an itchy trigger finger and a fondness for big red buttons? Do you have a pulse? If you answered yes to any of these questions then you might be the kind of person who'd enjoy being President of America! It's true, just about anybody can be President. The guy on the right is no more qualified than your milkman or some random guy on the street, yet he made it to President and is having the time of his life. That could be you! Becoming President will not be easy though, so this handy guide is here to help you every step of the way.

Who is Eligible to Become President?[edit | edit source]

Neither of these people are likely to become President

The old saying "as a kid I was told anybody could become President of America, and now I'm starting to believe it" rings true. More or less any random idiot can get elected if you work hard enough at it. However, there are certain undesirables whom will never stand a chance. In a nutshell, women, gays, lefties, sand-people and any combination thereof will never become President of America. If you do fall into any of these categories the best thing to do is to try and disguise it as best you can, try speaking in a deeper tone of voice and declare your opposition to any of the above types of people. Basically anyone who is white.

they will give you money, and then you can buy the election.

Not quite as cool as it sounds, if you're going to make it as President you will need to choose a political party. Whilst you could start your own this is generally for much more experienced candidates, the best thing to do is to choose the one you identify with the most, then systematically change party policy until it comes into line with your own warped ideals. It may take patience but eventually you'll be able to gain enough support for eugenics. And if that fails, just flip your lucky coin.

In order to become President you're going to have to put in a lot of leg work. The first few years before you run for election should be spent building a solid base of people who will vote for you. In order to save time however I suggest you simply appeal to people on religious grounds, by opposing gay marriage, abortion and divorce. This ready made group will support you to the hilt, allowing you to spend more time involving yourself in other essential tasks prior to becoming President, such as having a secret affair, dodging military service and tarnishing you opponent's reputation. You may also find it a good idea to join a secret society whilst in University. The Freemasons have been rigging elections for over two centuries now.

Got the Christian moral majority onside? Good. Now try to appeal to other aspects of society, kiss babies, appear on Jay Leno and generally get your face out there. Now would be a good time to come up with a catchphrase. In recent times "stay the course" and "I did not sleep with that young intern" have become popular in the mass media. By coming up with a catchy slogan you open up the whole bumper sticker market, which will be essential in eventually becoming President. Remember, nothing says "I deserve to be your leader" better than a slogan that questions your opponent's sexuality.

Ok, so you've established yourself, some of the people want you in and that's a good start, of course you're eventually going to want everybody to want you in power or else send them to the Gulag, but that's a bit advanced for now. The best way to continue your journey to the White House is to make some speeches. This is where the vast majority of candidates fail, as voters realise they are completely bat fuck insane and so the aim here is to make sure nobody manages to realise that you're a twisted bigot who will steer the proverbial ship straight into the proverbial iceberg of proverbial global annihilation. In order to achieve this your safest option is to say you're going to cut taxes. Of course the few people in the audience who can do math will realise the figures don't add up, but the vast majority will cheer loudly and proclaim you to be the savior of the country. If this doesn't happen for any reason simply start a USA chant. This also comes in handy if the people do realise you are bat fuck insane.

Again, questioning your opponent's sexuality, manhood and patriotism are all good ways to start, end and fill a speech. Nobody likes a gay pussy commie except other gay pussy commies and those are few and far between. 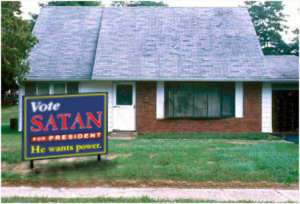 Elections where you are already President are much easier to win than elections where you are trying to get into office, providing you have used your term in office to good effect. By good effect I mean amending the constitution so the length of a term in office is "until you get bored", changing the voting procedure so the only name appearing on the ballot is yours or simply implementing fascism and doing away with the two party system altogether. Any of these methods is suitable for ensuring you remain in office. If you spend your time dicking around in foreign countries playing soldiers and hiking taxes the electorate are unlikely to re-elect you, therefore I strongly urge you to follow one of the above suggestions.

If on the other hand you are not in power the matter becomes a little trickier. If you have followed the guide you should win in a landslide as Christians and good American citizens turn out against that homosexual lefty you're up against. The main thing to remember is that the guy in power will be trying out some of the ideas mentioned above too, and you could well find yourself incarcerated as a political prisoner. In that case just hope that those ineffectual bastards who you were going to destroy lovely people at the U.N. help you out.

Things to do after becoming President[edit | edit source]

Congratulations, you won. After such a hard campaign of slander and defamation the temptation is there to relax, however now is not the time to rest on your laurels. To start enjoying your power why not introduce some new legislation in order to keep tabs on get to know your population better? Sure those civil rights people won't like it, but who's going to argue if you say it's for fighting terrorism? Can't find any terrorists to blame? Why not just make some up? Why not try to create a legacy to be remembered by? Nothing says "remember me" quite like some extreme legislation. At the same time, why should Lincoln and Washington get memorials and you get nothing? Just imagine it, a 1000 foot tall memorial dominating the skyline. And then of course there's always a good old war. Invade some small countries for fun, or get involved in a conflict that will cause nuclear Armageddon, it's all up to you, President!