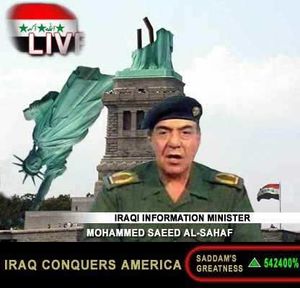 Critics have claimed evidence of bias in the U.S. media's coverage of the Iraq War.

Don't bow down before Goebbels? Why not try Conservative media?

According to respectful and trustful scholars such as Donald Trump, liberal media is a national brainwashing operation controlled by hippies, liberals, communists, members of Al-Qaeda, homosexuals, and feminazi dykes. It consists of a group of shabby studios in which $200 camcorders point at hippies sitting in plastic chairs whining about children dying in war torn foreign countries. Even Osama Bin Laden’s crew makes better videos than the liberal media. The current CEO is Tyler Sabo

The liberal media studios reside in flower shops run by 60 year old English lesbians. The ultimate goal of the liberal media is to brainwash the American public into believing that, only branch of government controlled by the Democratic Party, George Bush declared the Second Civil War in 2002 against the them. In hindsight, the war may have been created unnecessarily when Bush accused the liberal media of planting a pretzel in an assassination attempt.

There is only one concept to take into account when you examine the liberal media. They are never right. No matter what the liberal media do they will always be conveying a message that appears liberal on the surface, but is actually an elaborate scheme to encroach a universal system of ideals onto the public. Just remember that whatever ideas you might have will probably not be the result of your own cognitive fabrication of information, but something you saw on your new plasma television equipped with 90000 different channels that actually convey CONSERVATIVE media. Blame the NSC. Thank you and enjoy your local programming. In other words, fuck the mainstream media, Barack Obama, and all other pieces of political correctness shit that caused this liberal bias.

The truth about the liberal media[edit]

The Truth of the whole matter is that 99% of the Media is Liberal, since Liberalism is the ass-baby of the media, after it f***ed itself. MTV,PBS, BBC, The Operah Winfrey Channel, G4TV, Logo, SciFi,National Geographic, Those BET Channels.....for Fuck sake even the Disney Channel and the History Channel are all Puppets to the Liberal Elites! Run, they're coming after you, after all of us! With the plans to transform you into a Paraplegic Black Transexual Lesbian to fund their Legions of Darkness. Hurry! Take your TV, and toss it out of your window.....you live in a one story house? Then get the bat jimmy boy! and beat the shit out of that Liberal Propaganda Machine, but be careful, for upon cracking open your TV will let loose a swarm of tiny Marxists, Stalins, and a few John Lennons to, grab the bugspray and exterminate the little bastards. Okay good, now......wait somebodies at my door.....No! the Liberals have found me.......ahhh they're gouging out my eyes....... 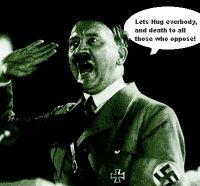 Hitler was one of the first European Liberals, executing anyone who did not believe in equality, somehow this turned out to be Jewish people, Homosexuals, and gypsies, go figure

We are experiencing technical difficulties, please stand by.

Okay were back, now onto the liberal media, the Liberal Media is Media which supports Equality and freedom of speech, just look around you and see how the World has prospered since Liberalism's birth, everyones happy and equal, whether you're a woman, African American, or a homosexual, you're all equal.....heterosexuality?......Males?........White People?......Why they are the Evil Elites who brought doom and destruction to the world, please standby as you are brainwashed by thousands of liberal stations, before long you'll love everyone and desire equality amongst all..........except white heterosexual men who are evil.

Do not attempt to adjust your television. We are controlling your thoughts. We can remove your doubts with a single snarky Rachel Maddow sneer. We can expand your mind to accept everything Obama says - even before he says it - with the digital equivalent of those 60's hippie drugs. 3-D? Ah, multiphasic mind control, that's right! You STILL bought that? Oh, we knew you couldn't resist, you evil capitalist - well, that's all in the past now.

Hold on a sec - OLBERMAN! Get your foot out of the door - you are F-I-R-E-D! Sorry, we caught him watching streaming Beck videos. That insidious Mormon mind bender. Now, put in the 3-D Harry Potter video . . . that's right. Remember 'They Live'? Well, Rowdy Roddy Piper got it WRONG - our glasses keep you from seeing sicko skeletal commie aliens, and we don't care if you do like seeing them that way. It's not real and you have to be shown the true faces of goodness and Eternal Truth.

Oh, yes indeedy! With our wildly popular programming, 3-D (Dumb, Dumber and Dupetest) glasses and brilliant, incisive Telling of Truth to Power - you WILL see the truth of Ameri-KKK-ah!