From Uncyclopedia, the content-free encyclopedia
(Redirected from Second Civil War)
Jump to navigation Jump to search 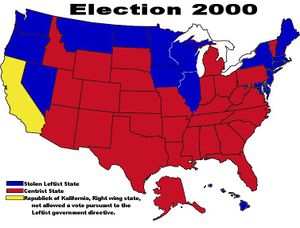 The states divided: Most battles took place in and around the former Washington DC

For those without comedic tastes, the so-called experts at Wikipedia have an article about Second American Civil War.

“A war fought over Freedom, a uniquely American thing, and other things typically American.”

The Second American Civil War (also commonly known as The Great Firearms War) was a War that dissolved The Leftist States of America and rebirth the United States of America. The war is generally defined as starting in 2004, and lasted for some ten months. It tore Leftist America's infrastructure apart and millions of Leftists died. The war's foundation was a deep ideological divide in America, Gun Ownership.

The Supreme Court case The People v. The Leftists strongly galvanized America in to two groups, those who owned guns, and those who did not. The historic decision removed a line in the second amendment of the constitution, causing it to read:

“A well regulated militia being necessary to the security of a free State, the right of the People to keep and bear arms shall not be infringed.”

As opposed to the original version which read:

“A well regulated militia being necessary to the security of a free State, the militia shall be a term used for the armed populace. The right of the People to keep and bear arms shall not be infringed.”

Two notable militia groups, The Lees and The Constitutionalists, set up extensive networks of armed patrols, they shot anyone trying to confiscate firearms from anyone else. The leftist government reacted strongly, and this event is most often given credit for setting America's break-up in motion.

The 2nd American Civil War was the result of Jim Brady's 2000 election and an overabundance of Firearms everywhere that caused him to crap his pants during his inaugural address. The combatants were The United States of America, the The Confederate States of America. The winner is a point of debate that will be explained later. 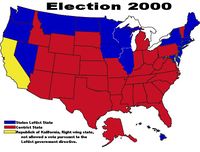 In 2000, the Leftists were split. Barack Obama was a top choice for running, but with a rise in apathy towards firearms rights prevalent throughout the upper Midwest and Deep South, the Leftists once again chose far-leftist Jim Brady. John Kerry asked to run, but was received no votes at the convention, save one. A delegate from Minnesota answered "present" during the vote and Kerry counted this to his favor.

In 2000, the Republicans were split. George Bush had run in 1994 with Jeb Bush. The GOP now had to choose between George W. Bush, Charlton Heston, and an aging, decrepit John McCain. When John McCain defecated himself, unleashing his bowels on an unsuspecting participator in the "Town Hall" style meeting, he was deemed unfit for office, and Charlton Heston became the Republican candidate with Arnold Schwarzenegger as vice president.

Schwarzenegger's Liberal policies in the Republik of Kaliforina before the election likely caused the near-votes of the north and west that allowed the Leftists to steal those states.

Jim Brady got close in the North as well as the West Coast and was able to bribe the vote counters to 'miscount' those states giving clear Heston winners to him.

In 2002, three Supreme Court Justices died mysteriously and within the hour Jim Brady had nominated three very secretly anti-gun Judges to the seats, the issue never came up in their hearings because of apathy on the part of gun owners who had never had their rights seriously questioned.

The suit was quickly defeated in every court it went to until the Supreme Court where the justices issued a decision of five words, "the government is always right", and repealed the offending line in the constitution on Friday the 13th of October, 2003

The NeoConfederate States of America quickly mobilized to protect the rights of the people. Charlton Heston was elected to become interim president, and began his tenure with a speech ending with Heston holding a rifle above his head and sternly stating "From my cold, dead, hands!"

Although Diplomacy was attempted negotiations broke down when the Leftists threatened to order military bombardments against the peoples cities unless they surrender their arms.

The first major conflict occurred when the Leftists took to the streets holing signs that read "convert to the peaceful religion of Leftism, or we will beat you to death with this sign" needless to say the few leftists that existed among the people were quickly converted or killed when they attacked the Confederacy with their sticks.

Minor skirmishes occurred between Confederate Militia and Military forces that were loyal to the Leftists until early 2004.

On January 1, 2004, some 557 Leftists assembled in the House of Representatives to vote on a measure to allow Jim Brady authority to attack the Confederate states of America. The Vote was 556 to 1, with the delegate from Minnesota voting "present".

Jim Brady ordered a nuclear attack against Graceland Tennessee on January 15th 2004. When this reached General Presley (son of Elvis Presley), General Hank Williams II, and General Charlie Daniels, the Military defected to the Confederate forces within the hour. It took another seven months to root out all of the FBI, CIA, DHoS, and ATE agents loyal to the Leftists.

The last-ditch effort on the part of the Leftist Union involved time travel to the past. Moments before the Confederate forces arrested all of the remaining Leftists Charles E. Schumer, a notable opponent to freedom, went back to the framing of the former United States Constitution and killed William Lambert so that he could assume his identity and become congressional clerk, conveniently leaving out the phrase “the militia shall be a term used for the armed populace.” And leaving a time capsule for the Leftists of the future to find with instructions on how to lie about the wording of the bill of rights and manipulate future facts and politics so that maybe, one day the rights of Americans would be a distinction of history, and the Leftist government would become the Supreme Dictatorship of the Amerikas.

“The people DO NOT have the right to live their lives as they want, they must be told by the all supreme government of the Leftists!”