From Uncyclopedia, the content-free encyclopedia
(Redirected from John McCain)
Jump to navigation Jump to search 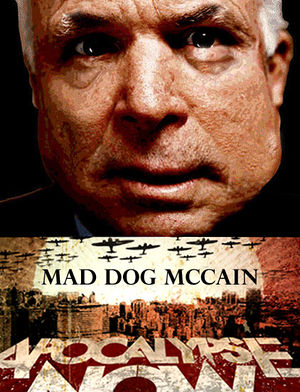 Russian pacifist Vladimir Putin condemned Vietnam for not finishing off Mad Dog McCain, and he challenged the deranged bomber to a one-on-one cage fight
“KGB”

DAMASCUS, Syria – Vladimir Putin - a dapper, cloak-and-dagger Russian politician and Karate teacher - met with all two reporters at a press conference organized in Moscow strictly for members of the American media not in cahoots with PNAC. Putin told the pair, which included us, that all peace-loving denizens in Syria and the world should start demanding air strikes against "Mad Dog" John McCain in order to force the pathological warmonger to put up OR shut up!

The Russian Prime Minister President and Commandant told the media, “Although Syria has not been what you might call cooperative with terrorists, still the suppression of terrorism is not a crime in Syria or in Russia, where law enforcement must be maintained.” He was referring in part to the bloody Western-backed terrorist attacks, particularly in the city of Homos, which have been decried by Dr. Bashar al-Assad and his pro-gay administration.

Meanwhile bomb happy misanthrope John McCain ordered the United Nations on the US Senate floor to carpet bomb Homos back to peace and property. “The only realistic way to achieve calm and happiness is with foreign air-power,” McCain said. “Through blessed air strikes the United States should lead an international humanitarian effort to decimate key population centers in Syria, especially in the North, West, East, and, ah, what was the last direction?” - the tortured old war pig asked us. Sheesh! How should we know?

We think McCain’s comments are pathetic. Not only are his words totally insane -- as the mad senator has said before that the world is too soft on war -- they are also a suicidal cry to finally launch the ever-itchy Apocalypse. McCain has also opined that the US should change its policies, starting with re-arming al Qaeda -- again. 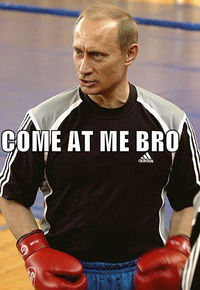 Politics doesn't get better than this

While Mad Dog McCain demanded blood and guts, coincidentally the US and European governments pleaded with Vladimir Putin to renege his anti-war stance on Syria, Iran and the world. But the stubborn Russian pacifist was unmoved.

Putin condemned the former POW, while also heaping scorn on the Vietnamese for not killing McCain while they had him in a pit for 7 years. “If McCain’s wishes are granted, we could be looking at the Apocalypse.” Putin warned. “But I have a better idea, if that Mad Dog wants to fight so bad then I challenge McCain to a death match, just the two of us, in a cage with bare hands. Winner takes all! By that I mean if McCain wins then we all die, but if I win then only Mad Dog dies.”

Putin continued, "I measure military success in counting how many missiles I do NOT have to use. So I plan to take him out in one shot with my Fukaina Exploding Heart Poke!" The intransigent peace-monger further emphasized his challenge by asking of Mad Dog McCain, “he talks the talk but does he walk the walk?”

We at UnNews think Vlad VS Mad Dog would be a great match up. Especially if it's promoted by Don King. Because then we could all have the satisfaction of seeing first hand that McCain is finally retired from active duty.

Featured Article  (read another featured article)
Featured version: 16 May 2012
This article has been featured on the front page. — You can nominate your favourite articles at Uncyclopedia:VFH.