Homework is an unfortunately common species of work, closely related to schoolwork. It is the natural enemy of everyone who isn't a dork. It is commonly found at the bottom of pupils' bags, scrunched up alongside sweet wrappers and broken pencils. Despite this, homework is far from being an endangered species as teachers regularly produce more of it, and inflict it on innocent students. If the homework is not finished and given back to the teacher, the teacher gets very stressed and shouts a lot. In rare cases, teachers have been know to spontaneously combust for this reason, much to the delight of their students.

The main purpose of homework is to allow the teacher to pretend to teach you without actually doing anything. Due to its time consuming nature, homework ensures that youngsters have no time for Facebook, posting Mudkips on the Internet or any variety of fun that evening. Homework is something that rarely ever gets done even after prowling the Internet for hours looking for answers to your four page math worksheet. Slender is a better form of education for you younglings, especially those who aspire to be serial killers.

Chances are that if you are reading this, homework is what you're supposed to be doing right now. Get back to work, kid.

For those without comedic tastes, the so-called experts at Wikipedia have an article about Homework.

The word homework is derived from the Greek words hom and workos which literally translates as "death by torture". This is because homework was invented as an evil form of torture during the Middle Ages. It was however decided to be too cruel for use after it caused the insanity of anyone who looked at it. So it was decided that Homework would be made a criminal offense, its only legal uses torturing criminals and occupying bunnies, so that they wouldn't have any time to plot human destruction. Homework was later used by Hitler as a form of punishment in the Holocaust, hence why he is one of the all-time biggest war criminals. After World War II, homework was legalized so that it could be used on school children in an attempt at controlling them and transforming them into the subspecies of human known as the nerd.

A few deluded people think homework is used to help the children learn, so that in the future they might make something of their lives. Of course the majority of people do not believe this, as homework is too evil to be beneficial. Specific details on homework are sparse, because those who engage in homework are much too busy doing it to explain it. However, some facts on homework can be pieced together from speculation and terrifying eyewitness accounts.

Though homework is found on paper, which originates from trees, the text is written by a team of top military scientists specializing in alternative torture, and is specifically designed to induce sleep. In order to avoid a harsher punishment in the future, the victim must maintain consciousness throughout the entire ordeal.

The setting of the homework

The teacher of the class will announce that they are "setting" homework, at which there will be much groaning emitted by all pupils within earshot. The teacher then hands out the homework on sheets, and the pupils must put it in their bags to take home and complete. Failure to do so results in detention, another method of torture preferred by teachers.

After obtaining the required amount of homework, the victim must carry it home and read it. The length of the text is directly proportional to how boring it is. 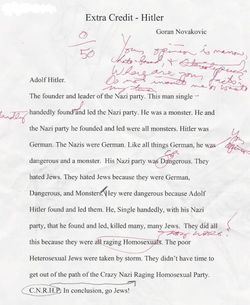 Goran Novakovic's homework assignment on Adolf Hitler and the Nazis. Apparently he didn't get a good grade.

After reading the homework, the victim is forced to scrawl words onto paper until his or her wrist is no longer capable of movement (a derivative of note-taking). At this point, the punishment is considered finished for at least five minutes, or until the wrist is sufficiently recovered to only hurt a great deal but still function. The amount of scrawling the victim must perform is generally inverse to the difficulty of determining what to write, but some particularly cruel teachers have been known to assign work which is both voluminous and overly complicated.

Other stages may exist, depending on the particular torture method of the teacher. These may include cutting out construction paper, creating collages, or using Microsoft Powerpoint. Often, the other stages force the victims to evaluate their own work and correct any errors; this torture can cause normal kids to become emotionally unstable and, if the errors are not corrected, the torture will force the victim to repeat the entire torture process.

Don't bother. It's been done.

It is said that this form of torture may be avoided by feeding the homework to a pet, most often a dog. It is suggested that evidence of said consumption be provided to the teacher to prove that such an event in fact occurred. However, many teachers are aware of such tactics and may assign an even harsher punishment.

In this so-called "class" you must face occult rituals known as labs. These rituals usually involve the sacrificing of "students". Labs usually involve calling upon demonic forces and possessions, as well as the inherent risks created by burning acids and toxic fume inhalation. Students often pass the time by smashing up anything in the lab made of glass and pretending someone else did it. Often, the teachers are witches or warlocks set on using a torture method called science on the children or helping them prepare for Hogwarts.

History homework is a specific type of homework that tends to be longer and more arduous. It is typically given alongside a series of textbooks relating to the topic. Rather than causing hunchbackedness, people simply drop history homework, often crushing toes and creating bottomless pits due to its sheer weight. Once the teacher finds out that the history homework has not been completed, all hell breaks loose. The trauma of this is actually how 99% of nerds are created.

This variety of homework is still done today. Homework is assigned regularly but when assigned, none of the teenage humans in the room ever bother to do it except from the previously mentioned nerds. If you ever get the opportunity to sneak into their natural habitat (AKA bedroom) you will most likely find them watching pornography, or doing extra homework. This terrifies all who witness it.

Maths, or "math", the most painful subject at school, is often given to some of the slower children for extra punishment. Some mentally challenged children whom many call nerds will often ask for extra maths homework, thus a whole pack of normal students suffer for a fortnight. Overdoing maths homework usually results in suicide, penis removal or transformation into a nerd. Some prisoners are fed maths homework as a form of punishment for not doing their homework which was in fact about Maths. They are then unable to complete the punishment, so the circle goes round...and round...and round.

This type of homework is not that common and is also known as "The Cardey". It is given by hypocritical teachers who try to teach you to be healthy, and yet are ten times fatter than you. This kind of homework is normally used because the teacher is under the mistaken impression that he/she is in fact teaching English. The result is that this confused teacher gives you an essay to write about how you can improve your fitness in P.E. This kind of torture first started in the 1200s. Though one solution is to slap the shit out of your teacher, shouting loudly that this is P.E. not English, this is not recommended, as the teacher, if one of the rare, actually fit ones, will beat you up, or if they are a more common fatter one, they will simply sit on you, resulting in your suffocation.

Homework has evolved from schoolwork, although some fundamentalist fanatical Muslims believe that homework was simply created through the magical powers of teachers. Schoolwork is a variety of work that is handed to a student during school, and words are supposed to be scrawled during school, but due to unfair detentions, Teletubbies, gas chambers, Metallica fans, and Russian goldfish, this schoolwork is often sent home with the student, hence the theory of evolution. By this stage, the schoolwork is fully fledged homework. Eyewitnesses claim that this schoolwork adds to the pile of homework the student is already carrying home, and that this often leads to the contraction of Super AIDS, or listening to emo music. Both of these things usually cause death, hence why there are cemeteries in most schools.

Considered the "Boss Level" of all homeworks, this normally takes weeks to complete. It may be set just before a holiday (see above), which it usually is. This takes the relaxing and enjoyable parts out of the holiday, leaving only pure stress for the student. Not completing the project usually results in humiliation in front of your classmates, as well as an F grade.

Why is homework assigned?

No one yet fully understands the answer to this. Some, such as the aforementioned nerds, think it's for their own good. Others think it's an attempt to turn us all into retarded geeks. However, in a scientific breakthrough, a new theory has emerged that the reason the teachers set homework is that they like to see the children suffering and trying to commit suicide by eating lead. The latter seems more likely.

Homework was originally carved into stone tablets before the invention of paper. Students would have to carry around numerous tablets to finish their homework, which led to the development of hunchbacks. After constant carving, some became artists; others lost the function of their hands. Today the equivalent of a stone tablet is the textbook, also known as a "brick".

Occasionally, the torturers temporarily regain sanity and let the students go home to their grieving parents. This is known as a weekend, break, half-term or holiday. However, many torturers are permanently past the point of recovery, and will set extra to be completed during this free time.

The developer of Destroy All Humans! realized one day that most kids hate homework. Deciding to get some pocket change for sweets, he organized a team and is currently making Destroy All Homeworks! and then soon to be followed Destroy All Teachers!. They will be released next year. 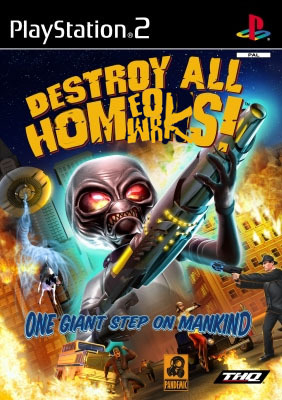