HowTo:Kill Yourself With A Brick

From Uncyclopedia, the content-free encyclopedia
(Redirected from Suicide)
Jump to navigation Jump to search 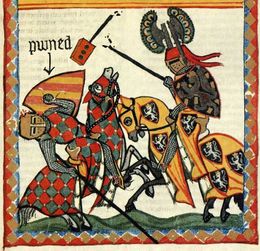 In Medieval Times, suicidal knights would employ jousting partners in order to be killed with a brick.

Good day to you sir, and may I say what a nice hat you are wearing. Oh, that's not a hat? My mistake. What's that you say? It used to be your beloved pet cat Tiddles who has been a constant companion since the day you got him to help with the grief of your old cat's death? He was killed by a runaway shopping cart? A shopping cart your children were riding in? There, stop crying, perhaps you can use your new cat to wipe away the tears. Oh, he's actually trying to eat your head? How delightful.

And your wife with whom you have shared four years of happy marriage and twenty years of solid hell just left you? And she killed your children after maliciously stealing your house, garden, car, garage, clothes and your cardboard box? Oh, the box was to put all the other stuff in. I see.

Ah, so the reason you come to me here and now is for advice. Not on your now terminally ruined life, but on another matter entirely. A matter of intrigue, interest and definite value. Sir, step forward. The time has come to enter the halls of the great. Prepare, sir, to kill yourself with a brick.

You can take the cat off your head now if you like.

Reasons to kill yourself with a brick

Before proceeding it is generally advisable that you explore why you feel the need to commit suicide using the most hilarious of building items. Our elite team of brick suicide engineers have narrowed down the root causes to the following options.

You don't have any friends

Quite simply, if you had friends, they'd talk you out of killing yourself with a brick, or at the very least they would provide you with a better suicide 'weapon', like an axe, a loaded gun, or a hemp rope tied in a noose and a pipe or pole. Friends are like that. They want to see you die with some dignity, as long as you die.

Tip:
Being poor is a disease. You're probably better off dead.

But we are not here to discuss ways of not being poor. Anyway, being poor can be remedied quite easily. The way to not be poor, and therefore the way to at least die with some sort of style is to spend all your money on lottery tickets. Oh, you already spent all your money on lottery tickets? Well that will teach you not to gamble then. Silly person.

Alternately, you could go begging in the streets, but make sure to consult the Guild of Tramps before doing so, as gaining the support of your fellow street homunculuses (or homunculi) will result in you having a much firmer standing in the streets upon which you will live. At any rate you only need to beg enough money off people to buy a brick. Unless you can beg a brick off someone walking past. People carry bricks around with them. EVERYONE you ever meet has bricks in their pockets. Despite this fact you will find it hard to get them to part with them. Maybe the cat on your head should be removed, so they don't think you are a yeti. No? Well the cat ties in with the next part anyway.

Because You Have No Style

Tip:
Having a sense of style helps make you less retarded.

Well, well. I daresay I suspected this had something to do with it. Style has not deigned to touch you with a ten-foot stick. Your patched trousers held up by string and coat made out of old copies of The Sun add to the general demeanor of stylelessness. Oh, and your beard. Your beard sells 'has no hope of living' like hotcakes. But there's no need to feel bad. Take consolation in the fact that soon you will be dead having killed yourself with a brick. Now, on to stage one.

Stage One: Acquire A Brick 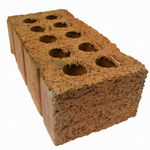 A common garden variety brick. Find one of these and you're home and dry.
Tip:
Scousers are useful for stealing bricks, just don't give them any money. They breed like mad with money. The last thing the world needs is more Scousers.

This is the most important stage of killing yourself with a brick. After all, you'd look pretty stupid killing yourself with a brick you don't have, now wouldn't you? Now, acquire a brick. They are quite hard to come by on their own, so you'll either have to employ a Scouser to steal one, or buy a house and knock a brick out of the wall with a sledgehammer. NO YOU CANNOT USE A BRICK FROM YOUR CURRENT HOUSE! This is because that hussy of an ex-wife stole it, remember? That's right.

Have you acquired a brick? No? Then what the hell have you been doing?!? No, actually, I don't want to know.

Here, let me help you. Bricks can be quite easily found. Try consulting a local building site. These places are a positive whorehouse for bricks. Bricks turn up all over these places, usually in neat piles to deceive people into thinking they are one huge brick.

Alternatively, as has been previously stated, every person you meet has a brick somewhere on their person. Why not mug someone going past for all you, or they, are worth and steal their precious brick off them? I mean, how dare they not give you the brick when you ask politely? I mean, you say 'please', right, and 'thankeesir', even when they give you nothing, right? Who died and made them Mr I-Have-A-Brick-And-You-Don't? WHY DOES EVERYONE CARRY BRICKS AROUND?!?

Once you have found a brick move on to stage two.

Tip:
You should be, more or less, dead.

Once having acquired a brick from a building site, a tumbledown house, a brickmakers company (make sure you are using a safety hat), or a passer-by's bloodsoaked pocket, follow carefully the method ascribed below.

You should probably take the cat off your head before the bricking.

Oh dear, you're still alive. At least you've gotten rid of the cat on your head. Oh, you seem to be standing in it. Anyway, if your brain stem fails to respond to a good, old-fashioned bricking, it may be time to move on to more violent advanced techniques.

The Brick/Pulley method is useful for people who lack the fast-twitch muscles necessary for a normal bricking. However, it is highly dependent on the height of the pulley and the size of the brick. If a conventional brick fails, you might want to consider using a cinder block instead. As a last ditch you could probably make use of a girder. Girders are not bricks, but they will kill you.

While this method can potentially allow a user to generate the maximum amount of force with their brick, it is far from foolproof. It is fairly easy to break your collarbone, shoulder, or toes. Come to think of it, if you've managed to screw up the whole brick thing so far, this method probably has too many moving parts for you to deal with.

Tip:
You may want to use water to help you swallow during this last step, mild irritation of the throat has been known to happen when swallowing bricks.

This method of killing yourself with a brick is only to be used as a last resort, as death or extreme humiliation will probably occur.

Congratulations! When you are done completing these steps in the order which they appear you have successfully poisoned yourself with a brick.

Stage Seven: The Smash Your Face In With a Brick Method

The 'smash your face in' approach is the least subtle, but most effective. Should this method fail you should probably go back to fishing for eels or whatever you did before. God obviously abhors the idea of your company. Considering the long name, this is obviously the hardest and most complicated method

(NOTE: the following will not be possible without holding the brick)

Alternatively you could find a strawberry and hand a brick to the nearest mountainously muscled hill of manflesh, then punch him as hard as you can. In return he will smash your face in with the brick you gave him. Whilst not killing yourself with the brick, it is probably the most foolproof method.

Contrary to popular belief, there ARE more advanced ways to end your miserable, pitiful existence with a brick then The Smash Your Fuckin' Face In with A Brick Method. Brick Injection provides a quick, painful demise, provided you aren't Leonard Cohen, a ninja or Bruce Campbell. The Steps are as followed:

Congratulations, You Are Dead.

Featured Article  (read another featured article)
Featured version: 21 November 2012
This article has been featured on the front page. — You can nominate your favourite articles at Uncyclopedia:VFH.