From Uncyclopedia, the content-free encyclopedia
(Redirected from Shopping cart racing)
Jump to navigation Jump to search

Shopping Cart racing is a sport which has been practiced over the centuries. The sport is usually performed on a parking lot and consists of racing domesticated Shopping Carts or Trolleys

For those without comedic tastes, the so-called experts at Wikipedia have an article about Shopping cart race. 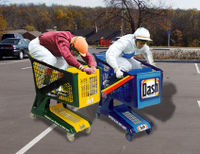 The breeding, training and racing of Shopping Carts in many countries is now a significant economic activity as, to a greater extent, is the gambling industry which is largely supported by it. Exceptional Shopping Carts can win millions of dollars and make millions more by providing stud services, such as Shopping Cart breeding, carrying groceries, and being homes for the homeless.

The style of racing, the distances and the type of events varies very much by the country in which the race is occurring, and many countries offer different types of Shopping Cart races.

In the United States, races can occur on flat surfaces, such as parking lots, giant umbrellas, Comic Book Guy from the Simpsons, and even Mt.Everest. American thoroughbred races are run at a wide variety of distances, most commonly from 4.5 furlongs (905 m) to 1½ miles (2414 m); with this in mind, breeders of thoroughbred race Shopping Carts are able to breed Shopping Carts to excel at a particular distance.

The high point of US Shopping Cart racing has traditionally been the Wal-Mart Derby which, together with the Kroger Stakes and the Safeway Stakes, form the Triple Crown of Shopping Cart Racing. However, in recent years the Target Cup races, held at the end of the year, have been challenging the Triple Crown. The Target Cup is held in a different parking lot every year

In Canada, Shopping Cart racing is also popular. Canadian Carts are better adapted to the cooler climates and have larger wheels for better running in the snow. 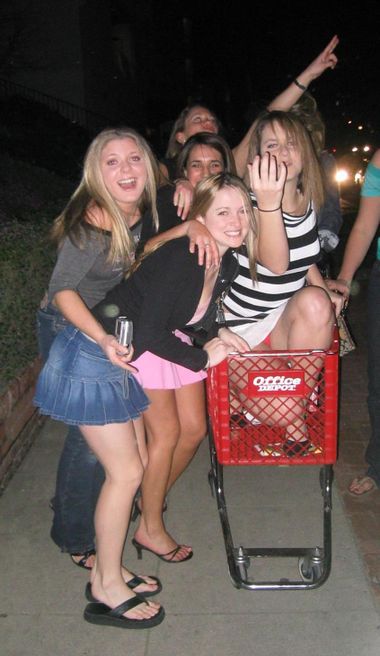 Racing in Australia has enjoyed great success with races with various breeds of Trollies such as the world famous Coles Myer Cup. In Queensland, the Woolworth's breed is known for its speed and the Coles trolleys are known for their handling.

In the United Kingdom, Shopping Cart racing, or Trolley Racing as it is called, is difference from conventional cart racing in the United States. The lack of spacious car-parks has lead race tracks to include obstacles, such as cars, poles, and curbs. The Trolleys are well suited for this, as they have full movement of all of their wheels.

Shopping Cart breeding is a large factor in Shopping Cart racing. Smaller carts are coveted for their agility, while carts with larger wheels can run faster. Breeders are still looking for the wobbly wheel gene common to all Carts and Trolleys, and have so far been unable to isolate it.

Retired Shopping Carts have a variety of uses. Some go to work in supermarkets while others are given to families as pets. Others are returned to the wild.

There are many dangers in Shopping Cart racing for both Shopping Cart and jockey: a Shopping Cart can hit an obstacle and fall, exposing both jockey and Shopping Cart to the danger of being run over and possibly killed. Extreme jockeys have been known for attempting to race wild carts, and this can be extremely dangerous. Dairy products are often used to confuse and enrage the shopping carts, increasing the danger by a lot.