From Uncyclopedia, the content-free encyclopedia
Jump to navigation Jump to search
“Imagine the thought crossing the minds of warriors the very first time they saw an enemy ride onto the battlefield on horseback, now imagine seeing a Model T riding into battle on horseback.....no wait.....that metaphor's gone wrong somewhere hasn't it....ah....but....erm...it's further proof of Mercedes' plans to sabotage me and my firm, they must have slipped something into one of the several vodkas I had at lunch....”

The Ford Model T revolutionized the way we murder our planet, and is the greatest invention known to man, certainly an improvement on the wheel anyway. It was built to solve a problem, a problem plaguing the lives of thousands, especially in the big cities. "Emissions" were a threat to society, horse manure was clogging the streets. Yes it kept many people in work, someone had to shovel it all away, and yes the Shit Skating Showdown between Buster Keaton and Charlie Chaplin was one of the greatest shows of all time, and yes it provided a cheap alternative to butter for some. But ultimately, the people were unhappy, thousands of complaints had been filed with the Ministry of Manure (also called the Ministry of Bullshit, but now called simply "The Home Office") detailing various grievances concerning the state of the streets of London in particular, 23879 complaints were lodged altogether (of which 23879 were attributed to a Mr. J. Dunlop, who oddly did not live in London.) Clearly people were unhappy with the shituation, and so something had to be done, a solution would need to be found, step in Henry Ford a young whippersnapper with bags of other people's ideas.

The Ford model T was in fact designed, and made, during the period historians refer to as "history", but "history is more or less bunk," according to Henry Ford. In any case, most of what has been written about the Model T and the Ford corporation as a whole is complete lies, no doubt spread by jealous copycats from BMW and Mercedes (according to Ford annual reports 1915-2008).

"It was a completely original invention", said Henry Ford, "not based on any previous types of transportation available, and I don't know how designs for every other car ever produced before the Model T got into my office". He goes on, "So the Model T had an engine, I think its mere coincidence that other cars before had a similar contraption, convergent evolution you might say. I don't know what the police investigation concerning the theft of several thousand engines from the Mercedes factory has to do with me, or why a suitcase emblazoned with the initials H.F. apparently found at the site, containing a signed photograph of me holding a similar looking engine to the ones stolen is considered evidence." In any case, the case was thrown out as the case was not considered good enough evidence by the Judge Ed Case, as it had been burnt in a mysterious routine fire. Ford won the case, and just in case they didn't they could easily have bribed several other important officials made a counter case concerning the case and the contents of the case. So basic designs were now drawn up, at least detailing the mechanics of the Model T.

The shape of the car, and it's aesthetic qualities were still undecide upon. Salvador Dali and Pablo Picasso were both asked to work on the scheme, Picasso was in his cubism phase and so he drew a cube. This was perfect, the flat front would create large amounts of drag, slowing the car down, and so removing the need to install effective brakes. Dali painted a car which seemed to disappear into the background. A further improvement still, no brakes would be needed at all, as if you knocked anybody over, they wouldn't be able to see you or your car clearly anyway, without squinting or being some distance away. Now the designs were finally complete, and production could begin. 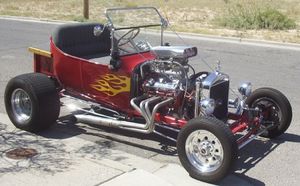 All the top celebrities of the day were invited to the big launch, along with all the press and radio reporters willing to accept a bribe and publish a positive review available on the day, which was every journalist in the U.S. This would have caused the financial collapse of the Ford company, if it wasn't for a young politician called Mr. A. Hitler, who injected funds into the company from his Swiss bank account in return for the future production of several thousand panzer tanks A huge sheet covered the very first Model T to be displayed to the crowds, and as Henry Ford yanked it off, his secretary walked in and said "Mr. Ford, the presentation is about....oh I've come at a bad time." So Ford zipped up, went outside and unveiled his machine to the world, startling everyone with his trapped foreskin brilliant car. The journalists asked many questions, or rather the same question many times: "Why does that BMW have a Ford badge on it?" Eventually, Ford lost his temper, "I didn't expect the Spanish Inquisition!" At which point nobody burst in. The initial launch had been a failure, but there was a back up plan. Ford was determined to prove the speed and efficiency of his Model T's, and a race was the key. The first annual Model T championship was held, in 1912. Two Model T's lined up on the starting grid in Berlin, at the request of the Fuhrer people of Berlin. One car was driven by Buster Keaton, the other by a Charlie Chaplin lookalike (the real Chaplin was entered in a Charlie Chaplin lookalike competition and so could not take part. He came third.) Henry Ford himself waved the starting flag, and walked to the other end of the mile long drag race track ready to wave the checkered flag for the winner Keaton (Chaplin lookalike Mr Baldrick could not control the car well in his giant shoes). Keaton was later heard to comment "…".

To date, Ford has sold over 6 Model T's.

The T is rumored to have many meanings, but it does in fact stand for Turbo-fast-ultra-speed, but as copyright names were charged by the letter at the time, T sufficed.

One nickname for the model T was "Tin Lizzy," after the rock band Thin Lizzy, who were celebrity sponsors of Ford for a while in the 1970s, releasing "Ford's are back in town" for use in a TV advertisement, however the follow up single "Frisky in the Car" was seen to be too over the top or risqué, and the deal ended. After this Thin Lizzy decided to create some more anti-Ford/Model T songs and released the album in 1976 as "Failed Brakes".

One common misconception is that Mr. T was another celebrity sponsor of the Model T itself, but this is untrue, as he was not born yet, silly. Mr. T says of the subject, "Shut Up Fool," but that's one of the very few phrases he is capable of saying at all (he has JackHackettitus).

The Model T is a car. The Ford corporation have a court order stopping publication of further details, but wish it to be known that the Model T was the greatest vehicle of all time and would win any race it entered, especially the Grand National. The Ford corporation also assure me, that the Model T was the first production car to be fitted with twin airbags, a fully functional radio and optional cd player, alloy wheels, and power steering. It released no emissions whatsoever, according to Ford propaganda, at least while turned off.