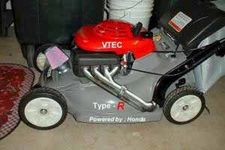 A typical Honda Shitvic, also known as Honda Death in some markets. Note how the vehicle is riced up by its typical owner. It has B.S. 75 cent stickers from Walmart that make the stock Shitvic supposedly fast and nice oooooooohhhhh fancyy (when in reality it's all justa buncha fake BULLSHIT).

The Honda Civic (also labeled Honda Death in some markets) is another small city car built by Honda. This vehicle, whose name implies the fate of the unfortunate owner who has an accident in this car, is also prone to losing front wheels at highway speeds and/or to split in half in 5 mph crashes.

Beginning in 2010, Honda plans to develop two versions of the Shitvic for the car's two different markets; the Shitvic Goodresalevaluenotmuchtroublegoodongas (available only in beige, silver and gray) and the Shitvic Toonersport (supplied without wheels since you're gonna put custom rims on it anyway). Interestingly, the horsepower of a Shitvic is directly proportional to the size of the spoiler and color of the flames on it. It is speculated that a properly tuned Shitvic with a 0.3 liter POS In-Line 4 can have as much as 700 kitten-power (188 Bhp) and 2.4 ft/lbs of torque. Honda is proud to announce that they will be reducing the weight of the vehicle by replacing the aluminum-foil body with saran-wrap.

It usually costs between $500-$400,000 (the price depends on the color, samba green being the cheapest and orange the most expensive).

Unlike most cars the Shitvic can run on conventional fuel or rice. In recent years rice has become a more and more popular fuel for the Shitvic and its unemployed teenage drivers.

The Honda Shitvic, like the rest of the Honda brand of cars, is the only popular car in the United States that comes with a rice cookbook in the glove department and the optional 80 mph timer so you know when your rice is fully cooked.

It has won The JD Power Award for "Best Car of The Year" twenty times in a row. In England the car has won safest car of the year award 26 times from 1980-1995.

The car is very popular in €urop€, especially Estonia,Germany,England, as well as Surrey, British Columbia, The United States, France, Russia, & Finland. It is also immensely popular with wannabe tooners and people who think they are cool. Included in this group are people who think they are helping the environment (not counting the hundreds of elves that died to make the engine).

In addition the Shitvic is famous for its use of extremely large engines. The Shitvic's advanced design and technology led to the development of the brand Ferrari. When Enzo Fagrarri first laid eyes on the Shitvic's POS 0.3 liter I-4 engine, he used it as inspiration to bring the first ever Fartrarri to life. Enzo died later because of massive amounts of stress, his last words were reportedly the following: "No matter how hard I try, I will never be able to build a car that is as advanced as the Honda Shitvic."

For those without comedic tastes, the so-called experts at Wikipedia have an article about Honda Civic.

Honda drivers are the worst on the road, especially when in Shitvic lsi coupes in black with 18-inch konigs- oh yeah. Crx's are pretty bad too. And the hybrid drivers are usually attracted to the same sex.

Although, If you own a civic you cannot take yourself seriously when upgrading it with fancy body kits, Turbos, badges, ETC., otherwise you are doing it wrong.

Just Remember, "DO IT FOR THE LOLz" and not for the "AWz"

In fact, the Shitvic engine is so powerful that every Top Fuel and Funny Car team competing in the NHRA uses the Shitvic engine block as the basis of their racing machines. As a result, Mahatma Ghandi, who drove for the PETA-sponsored Shitvic in 1776, broke the world record for top speed (6.022x10^23 mph) and shortest E.T. time (12 years). One of the acclaimed reasons the Honda Civic SiRII (who the fuck would want to name a car Sir?) is the fastest car ever is VTEC (VTAK). When bodykits, spoilers in the middle of the roof (for better downforce distribution), 25" donk rims and flames are added the car becomes almost impossible to beat. When VTAK kicks in, it's all over.

“VTEC JUST KICKED IN YO!”

Other famous race drivers that drove the Shitvic to victory are:

Tracey Quill is rather fond of her lean mean driving machine.

Shingo Shoji duct taped himself into his Civic EG 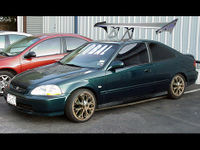 I think owners got his hopes set a little too high