For the uncouth among us who choose lies, the so-called experts at Wikipedia have an article about New car smell.
“New car.....yyeeaahh....” 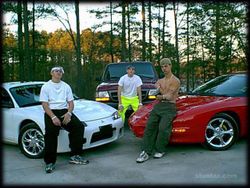 Rappers from the "Icy Hot Stuntaz" and their new cars.

New car smell is generally considered to be the most legal way to get a "super high", less objectionable than kitten huffing and less trendy than crack. New car smell is believed to be the primary recreational drug of both East Coast and West Coast rappers, who frequently describe buying new cars in their lyrics. The lack of new car smell is what causes car prices to drop so staggeringly after sale.

New car smell enters the lungs, where it is immediately carried to the brain (entirely bypassing the bloodstream.) The smell produces feelings of euphoria in the user, and can often lead the elderly to hallucinate that they are younger and more attractive than they actually are. Inexperienced test-drivers of new cars are frequently found exceeding the speed limit and driving recklessly in an attempt to impress women.

The hallucinatory properties of New Car Smell are perfectly demonstrated in this actual television commercial for Volkswagen Jetta taped in New Orleans.

The ease of use is one of the biggest attractions of new car smell: just buy a new car, and huff. Scientists at the University of Texas at Austin published a paper claiming that concentrations of New Car Smell decayed 90% in the first 3 weeks of ownership (duh!), so huff like there's no tomorrow! Experienced abusers always enter the car before huffing so that when they pass out, they do so on the car's soft cushions. After years of research "The new car smell" is only a simple method : "By taking almost 15000 elephant horns you can make a smell for 5 new cars" And the more popular and cheaper way : "A simple satanic slaughter of several crickets are preformed inside the car to get this special scent". "But this method of smell is only done in the great land of Russia"

New car smell is produced by adding formaldehyde to leather, thus creating the naugahyde that covers the traditional car seat. It is believed that scientists originally stumbled across the formula while trying to find a way to keep currency-deficient parasites from infesting cars.

Several companies have recently tried to reproduce new car smell in air fresheners and cologne. While some of the effects can be reproduced this way, without the new car to accompany them, users find it much harder to attract attention at stop lights and travel over 70 miles per hour.

Due to its intoxicating and brain-killing properties, almost every country has passed laws to legislate the sale, ownership, and use of new cars and their smell. In most places, it is legal for individuals to own cars, and it is legal for dealers to sell cars so long as they are to be used "for transportation purposes only". Despite this fact, many dealers use questionable advertising that glamorizes the effects of new car smell.

In order to keep new car smell out of the hands of minors, most countries impose heavy taxes on the import, export, and sale of new cars. It was this existing legislation that gave politicians the idea to tax tobacco. These laws also allowed authorities in Chicago to arrest Oprah Winfrey in 2005 after she distributed an entire fleet of new cars to her studio audience. Several cars were later confiscated for failure by the owners to pay sales and income taxes on them; by that time, however, all traces of new car smell had been removed from the vehicles.

Since the 1980s, the organization MADD has lobbied Congress to help decrease the effects of new car smell by making seat covers mandatory equipment on all new cars. Motor City lobbyists continue to head off these efforts by providing Congressmen with (you guessed it) new cars.

In an effort to get more people hooked on new car smell, car dealerships offer small samples of new car smell to the public at no cost. Called a "test-drive", the dealers legitimize the practice by claiming that they're offering buyers the chance to "experience the car's handling" and "see how roomy it is". Dealers can be heard on television and radio ads, exhorting the public to "come on down", "give one of these beauties a spin", and "bring the kids".

Knowing the highly-addictive properties of new car smell, dealers will go to great lengths to convince people to take a test-drive. Tent sales, clowns, and giant inflatable gorillas were all developed by the automobile industry to lure unsuspecting buyers to car dealerships. Dealers are often encouraged by their superiors to abuse new car smell until they go insane, at which point they invariably begin offering "CRAAAAAAAZY PRICE$!!!" and "INSANE DEAL$!!!" to consumers. After the worldwide impact of the economic downturn began to take hold, many companies selling more expensive cars have had to resort to more potent methods for increasing the effects of new car smell. Rolls-Royce recently announced the release of its new range of new car smells, which include selected infusions of cocaine and nicotine. Its owner BMW is so confident of the scheme's success that from the 24th August customers will be paid up to £5'000 just for booking a test drive.