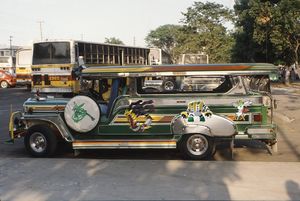 ~ Xzibit on a Filipino mechanic

“I punch one-two and then knockout”

Jeepneys are unstable death-machines left in the Philippines by the American army after WWII to serve as a spy tool. The Jeepneys that were left at that time were equipped with the latest spy gadgets WWII technology can provide for monitoring, communication, and self destruction. After being sold to the local populace, the American government created a Puppet government to rule the islands and left it along with these death mobiles, since then America has continued its reign on its 51st secret state.

For those without comedic tastes, the so-called experts at Wikipedia have an article about Jeepney.

The first Jeepneys that the Pinoys acquired from the Americans were considered too ugly. Anybody that will be seen riding these monstrosities were considered to be Undesirable no.1. Thousands were assassinated while riding their post WWII Jeepneys, even Repair mechanics on that era have reported abuse both physically and mentally by just trying to change a flat tire. The American government was fully aware of this and decided that it may change the general view of the people by a clever propaganda, an advertisement on fliers, and those flyers will be distributed on the whole Islands by the puppet government. Filipinos, emotional and insecure as they are, and not even reading the advertisement on the fliers for the Jeepney, formed a mob and threatened to overthrow the system, thinking that the fliers were cheap toilet papers that the Puppet government wants to impose on using. The mob held protests day and night bearing the slogan: "We're not Americans, we wash our rears with WATER!"

The American government upon retrieval of the data collected from the Jeepneys, was absolutely shocked at this output from the propaganda they tried. Admitting to themselves that the tactic that they used was no good and people too stupid about it, they thought of other solutions to the problem and concluded that a Time machine would be the most effective. While the Time machine is being constructed the American government decided to re-enforce peace to the islands by making its puppet President Marcos to declare Martial law assassinating thousands of Gay, Intellectuals, Religious, Jeepney Drivers and Manny Pacquiao's mother.

Upon completion of the time machine martial law was lifted off the Islands. Xzibit, a rich rapper, a Playa-dats-gots the bling and the ultimate Car pimper was transported from the future to the Philippines with a sole purpose of "Pimping" those mechanical uglies and upgrade the Spy gadgetry on them as they were now too outdated. 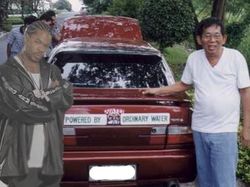 Xzibit with a Pinoy student after building a water powered car.

As advised by Xzibit, the construction of the Jeepney in which the Pinoys now enjoy, is very simple and straightforward. The "Pimpers" of the Jeepey had to scrape everything off of the interior which are sometimes filled with used and unused over sized condoms that are later given to children telling them that they are American balloons, no one of the locals could wear them without slipping off anyway.

The back end of the Jeepney chassis was elongated for the sole purpose of being able to carry more spy gadgets. Xzibit was instructed on how to embed these technologies on the newly pimped Deathmobiles. However the model became too popular after its Pimpin and most Filipinos who can't get inside the Jeepney for a ride would like to still persist and just hitch on the backside to stand... and sometimes die. Other pimpers would add an extra carrier on the top of the Jeepney for passengers, baggage and/or dead bodies that the local Police had just executed. Beyond the Driver and Shotgun seat in the front, the passenger backside of the Jeepney was fashioned with a long continuous seat on either side, passengers face each other in shame when they commute everyday as they are called dirt poor by people who could actually afford to take a cab.

The American government was alarmed, for the gadgets that they installed may fall off of the Jeepney whenever its overloaded. They decided to bring back Xzibit again to change the model of the Jeepney. The body of the Jeepney being wider, bigger now and heavier needs a strong machine to pull it. The American government decided to just import old truck engines from Japan for the use of the new Deathmobile model in the fear that their spy technology may be decoded by spies from other countries posing as tourists in the Philippines. The Japanese engines that are used for the new model were equipped again with Spy features and were encrypted using AES-256 encryption cascaded with TwoFish using Truecrypt.

The Jeepney's design defies every law of physics. It isn't much to brag about, showing signs of poverty of the driver and his union. However, the exterior does contain paintings of the sort, most of which are ugly or downright humiliating. Some of the paintings include Jesus, boobs, women, a giant shaved penis and graffiti. The interior design reeks of "Tomorrowland" - speakers beneath the seats to give those butts some bouncing, metal rail to grab on when the driver shows off his driving skills, a roof which is either collapsing or ready to fall down, or a fixed roof with names of the clanspeople written on it. The front area contains some worshiping idols and knick-knacks that block the driver's view, and a sign that says "Hudas not pay!" and sometimes, a proverb that subtly mocks the passenger's looks. Newer Jeepneys sport signboards that tell the passengers of the driver's questionable albeit hilarious English.

Jeepneys are very spacious that a mere twelve-seater can easily cram about FORTY-ONE potential victims for experimentation- 33 squished inside, 6 hitching at the rear, and one unfortunate soul clinging on the roof for dear life. And body fat isn't counted. These people are taken to secret prisons where they slave through the day making pancit bihon for the rich people.

Jeepneys are the highest source of air pollution and traffic in the country. They overpopulate the roads, filling the air with noxiously fumes (made with real carbon monoxide goodness!) that most Filipinos enjoy. It is helpful, of course, because the country is already overpopulating. However, drivers and the squatters have gained some sort of resistance to this poison. The have a tendency to stop at places where there is a "No Loading and Unloading" sign. Since then, Jeepneys have become the sign of the Filipinos in general.

To become a coveted Jeepney driver, one must posses 1337 skills, like having a hawk's eye for passengers, a mind-read ability to know if the passenger wants to take the ride, math skills for calculating the fare, dexterity for being able to drive while counting the money, and haggling skills for convincing the passenger that the fare price is higher than what was given and last but not least, a very stinky body odor. Charisma and physical strength is a must in case the Jeepney driver encounters another hot-tempered driver brandishing a lead pipe. Insane driving skills is a necessity to overtake the cops a la Grand Theft Auto. 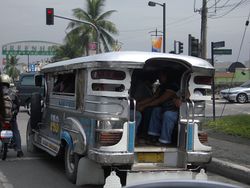 Jeepneys can carry as many as 22 passengers, but as few as 16.

The Jeepneys of today are all Pimped according to the preferences of the owner, though heavily encrypted with spy gadgets, these monsters can run at the speed of light... 115 mph (185 KPH). They are often used in Rally races and Ciruit competitions all the time. Some notable drivers of this speed demon are Wilbur Shaw, what's his name?... Schumacher, Lloyd Gonzaga, Henry Ford, Keiichi Tsutsiyaki a.k.a "the accident prone man of Jeepney drifting" and Manny Pacquiao.

The current holder the The world's fastest engine from the Business World Records, is Manny Pacquiao and his Jeepney that is solely built for speed. Named after its owner who's a U.S. spy, its called "The super jeep". With the top speed of 116 mph (187 KPH) this freak of man made nature impressed the judges of the Business World Records, even Robert Ripley rose from the dead just to see this moving marvel. And then Manny Pacquiao died from poisoning by his wife because of adultery.

In the anime Initial B, the vehicle driven by the main character Takumitchi Fujiapple was a 1986 style Jeepney, the Sarao JN86 Apex. Later his friend Itsukimirumodepon bought an 85 mistakenly thinking that it was the JN86, miserable, he then performed Hara Kiri.

In the movie The Fast and the Furious: Nagasaki Drift. Several Jeepneys were used on a scene, drifting in unison and then crashing magnificently. The said Jeepneys were later found to be decrypted of U.S. spy technologies and the producers were sued and later tortured by the CIA. The articles in question were confiscated and later held on by NASA to be developed as rockets fueled by Salami technology solely developed on M5industries.