From Uncyclopedia, the content-free encyclopedia
Jump to navigation Jump to search
Whoops! Maybe you were looking for badass?

His Excellency Ferdinand Edralin Marcos has issued Proclamation 1081:
This article is now under Martial Law
Only registered users of The Kilusang Bagong Lipunan can edit this article because some of you fucktards don't know the difference between SATIRE and SHIT!

You may be looking for Engrish and not even know it!

Manny Pacquiao. The GREATEST brawler ever.

“I lost last time I took a test”

“Let me speak with Arum”

“His English is getting better.”

~ some White dude on Manny Pacquiao

~ Manny Pacquiao on me reading this article

~ Floyd Mayweather Jr. on being a coward pussy

Emmanuel "Manny" Pacquiao December 1978- present) or better known simply as Manny "Pacman" Pacquiao worldwide, is a renowned Filipino ass-whooper boxer. He is of pure Filipino descent, although it is rumored that his English is of Chinese descent, but seriously, he's pure Filipino. He has kicked so much ass abroad that his enemies are either too pants-shittingly afraid to fight him (Mayweather) or are mercilessly shouting that he is using steroids, (Mayweather).

For those without comedic tastes, the so-called experts at Wikipedia have an article about Manny Pacquiao.

Manny Pacquiao was born in 1978, in General Santos City by an ugly witch named Dionisia. Apparently the said ugly witch became bored of life, and used experimental genetic modification upon a completely normal child and altered its characteristics drastically. As a result, the child went bazooka for BAZOOKA bubble gum, and went all around the province thanking everyone in sight. Dionisia, eventually realized her creation has gone too far and to prevent any more damage, she used a special spell to cyrogenically freeze the man for fifteen seconds. However, some punk-ass trainers found him, then taught him how to summon demons to help him fight.

During his childhood, young Manny lived without a dad, as most filipinos do to teach him how to kick ass. Additionally, this liability prevented him from experiencing the right of high school education. While he was in elementary school, he paid for his tuition and fees by selling drugs along the streets of his hometown.

One night, Manny and a couple of friends each grabbed three buckets of carabao urine and gulped them all down at once in less than half a minute. They began exercising all night until one time another random German dude got pissed off of what they were doing and told them to stop. Manny replied to this kind gentleman's request by planting fists into the man's face, while his friends held the man down until the aforementioned gentleman's face was now unrecognizable between a pile of turd and his mother's posterior.

His friend was immediately amazed from the ass-kicking act and said, "Wow alam mo kung paano mambanat!", (which means 'Wow dude, you know how to kick ass' in Tagalog). These words inspired Manny to pursue a career in boxing for the rest of his life. This led to the popular premonition by his personal demon that Manny Pacquiao always fights better than those other Mexican (who are all soft and weak anyway) and the one British boxer. 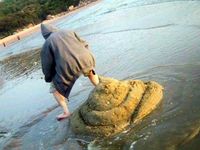 Above: What Pacquiao's opponents' faces look like after a bout. [I Don't Believe This].

Pacquiao started out amateur boxing immediately after the incident. He fought once before his first win. This is highly due to the reason that a boxer does not obtain much winnings from every bout, which gives him little money to buy a Mercedes Benz. Eventually, after some losses, he won because he was girly enough to beat the hell out of some soft Mexican boxers. His opponent stepped into the ring for the night and his face deteriorated immediately the moment Pacquiao stepped foot into the ring holding a picture of his ugly momma.

Some big-ass promoters were present during the said match and were slightly impressed by Pacquaio's queer ass-licking abilities. They made a deal and with their huge piles of moolah, they propelled Manny Pacquiao into great heights that he soon reached the level of professional boxing.

A lot of ass licking later, Manny was winning, together with his team and his coach, Freddie Roach. They were training hard for their merriment of being the champions from the last winning bout when suddenly some freakin Mexicans burst in the bar and reportedly started drinking their ass off. While Pacquiao got pissed off and took all the beers and shipped them and their beers to Mexico. Pacquiao and those Mexicans met again, thus having a boxing bout, and Pacquiao beating their ass off and sending them back to Mexico, where all soft wannabe boxers should be.

The feud between Pacquiao and lousy, soft Mexican boxers began once again. They Mexicans were as numerous as their losses with Pacquiao. In one bout, Pacquiao got his ass kicked because he's getting tired,and his demon was on vacation, he has sympathy over the Mexicans whose faces are now comparable to looking at fresh Texan cow shit whenever they get their dosage of ass-kicking from looking at that picture of the mommy of Pacquiao.

After countless Mexican tacos were stacked neatly on top of each other in Pacquiao's private locker, Pacquiao decided to chill with his fambam. Whilst he was chillin, he met the UK one time boxer Ricky Hatton. They began a heated discussion about their preferred chicks and why they're awesome. Ricky, being British, used his funny accent and language to confuse the shit out of Manny, and Manny immediately turned and went all filipino on him and quickly started making excuses and trying to blame all his troubles on someone else. Ricky's immediately challenged Pacquiao to a bout. Pacquiao accepted and beat the shit out of Hatton after stunning him with that ugly picture of his momma, proving once again that the British are only good at tea parties, irish dancing, and the ultra-slow game of cricket.

For some reason, Pacquiao got into a fight again, this time with some shady Puerto Rican boxer named Miguel Cotto. Pacquiao, being as stupid as he is, made fun of Cotto's name, saying that it reminds him of those little white shitheads he sees on Cotto's arm hair when he refuses to take a shower for a day. Cotto got pissed, then proceeded to slap Pacquiao in the face. Cotto fought Pacquiao in a bout two months later, and got what he deserved after being heard to say "Oh, my god, what is that thing?" After seeing Mannys picture of momma.

It is rumored that Mr. Floyd Mayweather Jr. and Manny Pacquiao had a fight and will have an all-out galactically-epic bout sometime in 2010. However, Floyd's dad was too observant and shouted "ROIDS BIYATCH!" and accused Pacquiao of juicing himself. Pacquiao and his coach denied all accusations. But Floyd doesn't give a shit[citation needed]. Such a frickin loud mouth of a pussy Pacquiao is. The reason that mayweather did not fight pacquiao is that he's afraid manny will whip out that picture again.

later on Manny fought a random mexican dude named Antonio Margarito. Margarito was a 6-1 underdog in the fight which causes him to hide under the table. The fight went on a brutal way when Margarito's face was broken into three pieces. The referee tried to asked margarito "AM I handsome?" to show if he can still hold on in the fight. Manny of course said yes and they both had sex at that night( even though margarito lost). After the fight, Pacquiao issued a challenge to Chuck Norris to look at his picture.

Pacquiao fought Taylor Swift conquerer Kanye West on May 7, 2011. This bout was scheduled after West claimed that Pacquiao didn't care about "Slick" African American fighters and challenged Pacquiao right after his bout with Margarito. Pacquiao won by unanimous decision and in the post-fight West stated "I felt that power, I saw that speed. I couldn't catch the lil flip, His demon was with him. Still, Floyd Mayweather is the greatest fighter of all time!" Pacquiao smiled and handed him his signature left hook that Ricky Hatton felt sending West down to the canvas.

After retiring in boxing he plans to be rockstar and bang a lot of groupies. He'll probably bang your wives as well. Yes you.

Pacquiao is an epitome of Philippine mass media. He became a singer, but did not receive much critical acclaim because he's a fool. In addition to that, Pacquiao has had his own movie, "Wapakman" ("What the f**k, man?" in Tagalog). The movie cost millions and the only probable reason why people watched the film was because of the appearances of awesome people and Krista Ranillo (who?) in the film. Only men showed up in the theatres with extra condoms, because most of them are flaming fags. And rolls of toilet paper. And there was a lot of OHHHH SNAP. Some were amusing. Manny was also offered by Bob Arum to make a gay porn with him. However , manny refuses as he said his dick is a bit small(because his asian).

Manny was also caught wanking in the middle of Sesame street. This made a lot of controversy on how small manny's dick was.

Pacquiao, being so tired of turning Mexican, British, and nigga faces into freshly nuked cow shit, decided to compete in the ranks of the largest Mafia in the Philippines, the Philippine government. 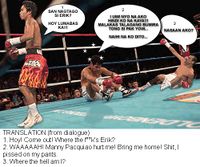 Manny Pacquiao after kicking the asses of two Mexicans.

Manny Pacquiao's only weakness is not unknown to his opponents. Having 1 gram of blood taken 2 days before the fight. It weakens Pacquiao and causes him to feel weak and powerless when he fights, just as he fought Mexican boxer, Erik Morales. Pacquiao lost that fight, by decision. Oh, and also, Erik Morales trash-talked Pacquiao in English during their weigh-ins, which caused Pacquiao's brain to malfunction (it has been known that Pacquiao does not comprehend English in any way possible) and contributed to his loss.

But they had a rematch and Pacquiao, after squatting in his corner and praying beat the hell out of that guy. After that fight, manny become the best boxer in the universe (and that means Philippines to a Filipino, because of a general lack of knowledge that anything outside the RP exists). He smack Miguel Cotto's face and make him cry during their fight. Cotto stated after the fight "I wasnt crying , there's just something that hit my eye"

The only weakness Manny has is if his will ever abandon him. His opponent will then beat the little guy down. Note that Manny generally fights Mexicans, and we all know how soft they are.

Manny loves is prostitutes and acting as commisioner will push for world wide legalcy on the subject making them free in the process as Manny unlike other boxers is politically correct and would not go against religion, including adultery, gambling, Doping and Lie this no sinner is definetly the most unotorius gangster around, next bout Moneys left overs Baby Mama at catchweight. 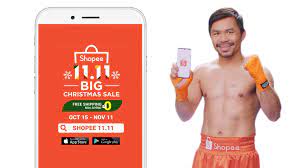