From Uncyclopedia, the content-free encyclopedia
Jump to navigation Jump to search
The Tick formerly Blue Beetle
Whoops! Maybe you were looking for The Tick, or The Green Hornet? How about Patrick Warburton?

Blue Beetle is the name of four different superheroes, three of whom suck. First, Dan Garrett, then Ted Kord, Jaime Del Valle and finally Brock Sampson, who morphed the beetle into The Tick, which doesn't suck.

Golden age
The original radio Blue Beetle was this guy named Dan Garrett, a rookie cop who wanted to be a superhero in order to get some. But since he didn't have any cool powers or a kick-ass origin, he began to take steroids to get super strength and speed, and decided to wear some chain-mail to score with the ladies. He kept taking steroids for about five years before they shrunk his junk and gave him boobs. Years later, he "found"[1] this magic scarab[2] that gave him super strength, flight, lightening blasts, and telescopic vision, the last of which he used to spy on supermodels and underage cheerleaders changing rooms, even though they were thousands of miles away. Eventually, ladies got tired of this super peeping tom, formed an angry mob, and killed him. He later came back as a zombie to kick Ted Kord's ass for stealing his identity, but was beaten and died again when Ted kicked him in the nuts.


Following Dan's death, his ward, Ted Kord became the Blue Beetle. He couldn't get Dan's[3] scarab to work for him, for reasons unimportant to this part of the Blue Beetle saga, so he decided to copy Batman, build a giant flying bug, and become a member of the Justice League. During his tenure, he fought some gay Galactus ripoff, stole money from his teammates to open a strip club on a living island, and get gay married to Booster Gold for the insurance. Years later, he was killed by Max Lord for speaking out against Tedius Crisis and its lack of decent storytelling...Lord responded by shooting him in the head and burning his body and bones. He too came back when Booster Gold altered time to prevent Pirates of the Caribbean from being a success at the box office, and now has people think he's still dead[4].

Did you know... Jamie Del Valle was also the voice of Radio's Green Hornet and producer of Yours Truly, Johnny Dollar, both huge hits.

The penultimate[5] Blue Beetle was an illegal immigrant named Jamie Del Valle. Jamie was employed by Ted to be the janitor at Kord Industries, and also used him as a sex slave[6], since no woman would do a guy with a small penis. After Ted's death, Jamie ran to freedom and stole Dan's [3]scarab, only to have it weld to his spine, and become a black and blue rip off of Iron Man's armor. It gave him super strength and durability, the power to turn his hands into weapons, and made his johnson bigger. Jamie was a member of the Teen Titans for awhile and even teamed up with Batman on a few cases until Iron Man killed him for stealing his shtick. For long time after he just did toilet bowl drop-in tab commercials, but no one gave a fuck... 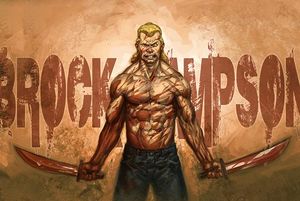 
“Hey, Beetle, I need you to clean the Bat shitter!”

By the time Brock took over the franchise, the Blue Beetle had suffered so much humiliation that he renounced his beetle hood and started saying he was a tick. Dispensing with the silly magic bug mythology, he handled it by feigning memory loss. As a ridiculous looking blue thing, he was able to cloud men's minds and for all intent and purpose become invisible. He was the reluctant defender of the city. His mere presence was enough to strike fear into the hearts of men. Truly with The Tick around Crime doesn't didn't pay. For he knew what evil lurked...in the hearts of men.

The Tick took off and became the most popular superhero of the north woods. Sans costume, Brock's day job was body guard at the Office of Secret Intelligence.

In Other Media[edit | edit source]

"How does it feel to have no writing staff"?
Barry Gordy to Dan Garrett

The Blue Beetle started out in Radio and was a huge success until Barry Gordy of Detroit's WXYZ and Windsor's CCOD, purchased the head writer of the Blue Beetle, Arianna Beetleton and her company, Beetpost Scribblins and Hair-dos, to help create his rip off show The Green Hornet. At the departure of Ms. Beetleton, is when the Beetle franchise started to really suck.

Due to the success of the French 2006 10 minute Green Hornet movie, Hollywood wanted to make a huge blockbuster too, but could not get the rights to the Green Hornet, so figured, they would make a Blue Beetle movie instead. Not being able to lure a fit actor to play the lead character, they hired Seth Rogan as the Blue Beetle, and introduced a new Asian side kick played by Jackie Chan. This character was not from Japan or the Philippines, like Kato of the Green Hornet, but from Myanmar. No stereotypes exist of the Myanmarianistas. The film was a huge box office success, selling out every screen it played. When the DVD was released in May 2011, DVD stores had to dispatch the disks throughout the store randomly so people would browse around.

For those without comedic tastes, the so-called experts at Wikipedia have an article about Blue Beetle.

For those without comedic tastes, the so-called experts at Wikipedia have an article about The Tick.