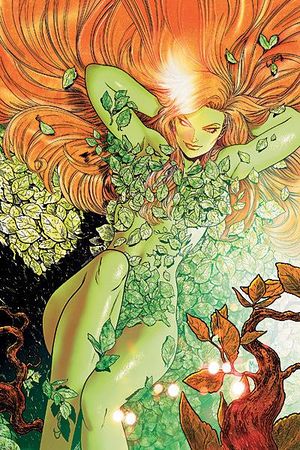 The original writer has died from an extreme case of Erectile Dysfunction and will be unable to continue this article, so a new writer (who will hopefully not die) has come to continue on. Oh, here he is. Our leading researchers proved that the only writer who can not die is a gay person. 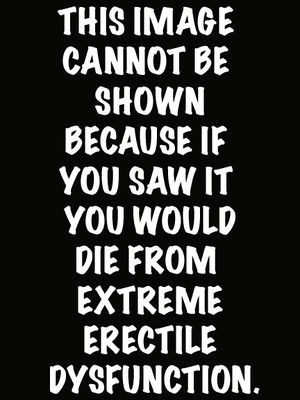 Pamela Lillian immediately after emerging from the plant cocoon.

Poison Ivy was originally known as Pamela Lillian, a very nerdy girl who was obsessed with protecting plants (and the rain forest) from government agencies (and always failed in her impossible quest). She wore large glasses, had some bad ackney and very out of date outfits, she was often times picked on at school for her odd obsession with plants. As a class prank, some bullies took her hostage and shipped her off to research facility for poisons, and even stamped her with a patient stamp. When she reached the facility, the scientists saw the stamp and figured she was the patient they ordered to test their various poisons on. Pamela spent weeks getting injected with all kinds of different poisons the scientists created, and for some strange reason that has no logic and cannot be explained the poisons didn't kill her. Eventually they injected her with one too many poisons and she started to go through some odd stages. The poisons eventually took a full effect on her and she fell into some nearby plants. The mutations within her body quickly spread to the plants she touched and they quickly consumed her in a giant plant like cocoon (don't ask why). Within the cocoon, Pamela's entire body started to transform.

The scientists were upset that their test subject had been consumed by a giant plant cocoon, so they decided to use the cocoon as the test subject (injecting yet even more poisons into it). Finally after one week, Pamela's bare naked body was ejected from the cocoon and when she awoke she saw what had happened. She was now thinner, without acne, had brighter hair, green skin, better eyes and above all much hotter. At the first sight of her, the scientist immediately died from extreme cases of Erectile Dysfunction. Pamela soon discovered that in addition to her new look, she had the ability to control all plant life. Pamela realized that she was proof to one of the world's greatest secrets; if you inject yourself with enough poison, you will become hot super powerful being. This was a dream come true for Pamela and she got so happy and so excited that she lost her mind and went insane. She then found her way back to her old school and used her new look on the bullies that picked on her, they died of extreme Erectile Dysfunction. She then decided to turn to crime and steal all the money she ever needed to save the rain-forest (not knowing that the government had pretty much torn it all down). She then stitched herself an outfit of leaves and took the name Poison Ivy (because she apparently thought she was a plant... go figure). 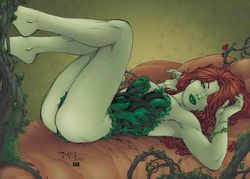 She decided to start her career in Gotham City, because she heard that every one there was absolutely nuts about hot women. She moved to Gotham and started her criminal career, all of her victims died in the exact same way as the bullies and scientists. During her first crime she encountered Batman and his annoying sidekick Robin. Batman was able to avoid being swayed by Poison Ivy, primarily because he spent each one of his days around hot women (like Catwoman). Robin however (being a teenager) was not as calm as Batman, and thus started having problems around Ivy. Ivy used this to her advantage and managed to escape with all the loot she stole. Batman tried to help Robin get control of himself, as it was the only way to catch Ivy. Batman and Robin chased Ivy all over Gotham, however she kept escaping due to Robin's hormones (Batman had to struggle with himself to not use the Bat-Shotgun on Robin).

Finally, one night Batman found that Robin was missing, he tracked him down and discovered that he had found Ivy's lair. Batman followed Robin's signal to Ivy's lair, he was so proud of Robin for fighting his inner demons and locating Ivy's lair. He then found Robin with Ivy... getting a MASAGE FROM HER (Batman almost used the Bat-Shotgun on him, but stabbed himself in the arm to block out the thought). Ivy then turned on Batman, while Robin laid in the grass and looked at the sky (urr). Batman was no match for Ivy and her deadly plants, but then he slammed into a shelf full of weed killer which Ivy stupidly left out. The weed killer killed all the plants in the house (what... do you really think any real plant would want to kill a human) and Poison Ivy was stripped (whoops... wrong choice of words) of all her minion plants. Batman then incapacitated her and sent her to Arkham Asylum (with Robin pounding and screaming at him). Batman dragged Robin back home and gave him a long chewing out. In Arkham, Ivy became incredibly popular and was sought after by all the inmates. She has used this to her advantage to make numerous escapes (Batman has always left Robin at home when he has to face her). 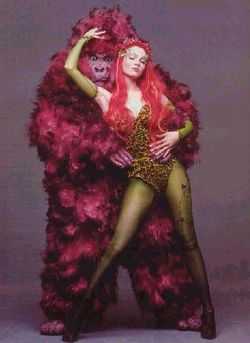 Yep, why do you think she was massaging him in her lair. This relationship has currently been halted due to Batman leaving the kid at home all the time.

Yep, they kissed. But what the readers never saw was that they continued dating for a month afterwards, talked about getting a place together with maybe a cat and a parking space and even looked at wallpaper designs, but then she didn't call for like, days, and who does that? I mean, seriously, who does that? [1]

She hooked up with the Penguin simply because he had a lot of money and a gullible mind. This relationship lasted about two weeks before the Penguin was murdered by every criminal in Arkham because they hated the fact that he was the one who got in a relationship with Ivy (no one was really upset at the loss).

Poison Ivy got into this relationship after she started going through a phase where men in lots of armor were suddenly hot. At the time Mr. Freeze was still upset because he had lost the wife he had worked so hard to keep alive for years after a power out caused her container to lose power for three minutes. However he eventually started to love her (after she did some lap dancing on him). She later chose to dump him (literally) after she found that his cold body temperature started killing her plants. He was later found in a garbage crusher (dead and gooey).

Gorilla Man is a normal Gorilla with pink fur (what's up with that). Poison Ivy actually wound up liking him after she saw the movie King Kong and started to like monkeys. Despite his growls, tantrums and ability to break everything in his path, Poison Ivy grew to love him. Eventually she married him and started a family (until she found out that she couldn't due to the fact that all the poison in her body caused children she was pregnant with to be born dead). The criminals at Arkham apparently don't seem to try to kill Gorrilla Man, probably because they know angering him means certain death.

Let's just say she needed a Scarecrow in her 'garden'. 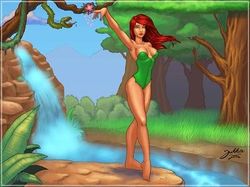 Poison Ivy struck again and again and many people suffered from her deadly killing technique. However, in an attempt to prevent more deaths, scientists created a drug known as Viagra. Eventually, a majority of the people of Gotham started to use Viagra and were able to avoid lethal amounts of Erectile Dysfunction from Ivy. Ivy herself eventually lost all hope of continuing as a criminal due to the fact that the rainforest was already torn down and she was not very good at stealing with a majority of the population using Viagra. So after she served her time she got some surgery to get rid of her green skin and took up a career in modeling. Immediately after taking up the job, she was an instant success and earned so much money, that she and her husband were able to buy the fancy home of Bill Gates (causing him to call in armed forces). However her modeling career caused many of the Viagra treatments to fail, and so scientists were forced to develop stronger douses of Viagra (with many accidents along the way). 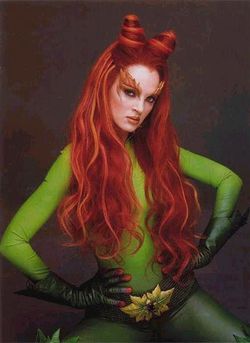 Many fans and critics have constantly made the following statement: "This is NOT F***ING HOT!!!"

Poison Ivy starred in the movie Batman and Robin. She was put in the position of secondary villain to Mr. Freeze (played by Arnold Schwarzenegger due to Mr. Freeze's tragic death). The movie however was considered a flop and she spent years recovering from the disaster. A large number of Poison Ivy fans greatly accused the film for making Poison Ivy wear clothes that were not very revealing and making her wear her hairstyle in a large number of tacky ways (none of which looked good). The director of the movie stated that he chose these outfits and hairstyles because he feared if she looked to hot then there would be a large amount of deaths in the audience (he was then showered with a mix of fruit and weapons). Ivy herself stated that she was very unhappy with the movie, but not because of her looks but because she felt the director gave her very little characterization, she then asked fans to forgive her and remember that it was not her fault for her horrible characterization (to which fans responded with a very loud "What the hell are you talking about, woman?").

"You know that Poison Ivy has a strong sexual voice and I don't, so go ahead and eat shit!" - Dr. Girlfriend