Power Girl is a superheroine in the DC Universe. In the alternate dimension known as Earth-2, Supergirl doesn't exist, and Power Girl is Superman's cousin instead.

Power Girl's given Kryptonian name is Kara Zor-L. (The family last name was spelled wrong on her birth certificate.) Her original secret identity on Earth was Karen Starr, a name which she deeply regretted taking since she kept having to deny any relationship to Kenneth Starr. She later changed her secret identity to Nadine Jansen. 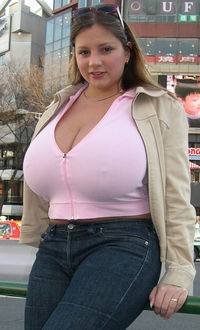 No one would ever suspect that unassuming model Nadine Jansen is really Power Girl.

Power Girl has had a long and convoluted history. At first she was the cousin of Superman and a fellow survivor of Krypton. She took part in the silver age Justice Society, but for a long time she never really caught on. When the Justice Society disbanded Power Girl appeared only sporadically, filling in the rest of her time as a guest panelist on To Tell the Truth and The Hollywood Squares. It was on the latter show that she befriended center square Paul Lynde, whom she later described as the only man who ever looked her directly in the eyes. (Friends later explained this to her.)

Power Girl was included in one of DC's omnibus multi-part storylines, Fuckup on Infinite Earths, where her origin was changed to make her the daughter of the Wizard of Oz. In another multi-part series, Zero Percent Financing, Power Girl became immaculately pregnant and then believed herself to be the virgin Mary. After birth, however, the child mysteriously reached maturity quickly and then, knowing what was good for it, disappeared from the storyline completely.

Confused, Power Girl wandered aimlessly for months, not knowing why she couldn't understand her true heritage, until Superman explained that the reason for her confusion was that she was a blonde. "If not for that, you never would've fallen for all that other bullshit," he told her.

Finally realizing that she really is a Kryptonian, Power Girl became a member of Justice League Europe, this despite the fact that she couldn't speak European. She really came into her own in the JLE, spending three years primarily being antagonized by Wally West (The Flash). She finally quit the JLE when she found out that, at night, Wally had been slipping into her bedroom at super-speed to grab a "quickie" while she slept. Wally West was the first Flash to ever have his legs broken. Power Girl received only a reprimand from Justice League head Maxwell Lord, but editors at DC had to quickly scramble to bring in The Flash's backup, Vinny Testaverde.

Power Girl later teamed up with the new JSA, the Jewish Superhero Association. Even though Power Girl was not Jewish, the other team members made her their leader based on the fact that, like the Israelites, she'd spent a lot of time wandering around trying to find out where she belonged. Also, she didn't have the heart to tell them that the alien Kryptonian markings on the ship she arrived in weren't Hebrew.

Finally, DC Comics gave Power Girl her own series in which she made friends with another superhero named Terra and a male ally who provided her with scientific research and help. The new series received widespread praise from critics and fans alike, who proclaimed it the first time in forty years that Power Girl finally been given a stable, popular, well-written background. So naturally, DC cancelled the book when it launched its most recent biennial DC Universe reboot, "52 Pickup".

Though Power Girl has fought many enemies including Starro, the Ultra-Humanite and The Extremists, her most frequent adversaries are catty women who make comments about the size of her breasts.

Powergen became a major rival when Power Girl linked up to The National Grid and became an energy supplier. After all every superhero needs to make a living somehow.

Power Girl's actual super-powers are the familiar Kryptonian ones, such as super-strength, flying ability, super-speed and invulnerability, along with a few less familiar traits, such as super-attitude-problem. The latter turned out to stem from an allergy to the artificial ingredients in her pop, and Power Girl has calmed down considerably since the introduction of Pepsi Throwback.

Other powers have been attributed to Power Girl, such as the ability to make men drive their cars up telephone poles, but since this ability is shared by a handful of lucky Earth women as well, it is not considered part of the official canon. In bed, Power Girl claims to be capable of "super tit-fucking", but no one knows how this differs from regular tit-fucking...although many would like to find out. She super tit fucks me all day long

Power Girl as normally seen by most people

In appearance, Power Girl is a striking six foot blonde with a shapely figure, muscular arms, and enormous 38J boobs. Though she has worn several costumes, the most familiar one is a white leotard with an opening in the chest (known as the "boob window") to display her abundant cleavage. The hole serves two purposes: (1) it attracts men to her ample chest so she can complain about men staring at her ample chest, and (2) it keeps readers watching in the forlorn hope that one day she will fall out of her outfit.

The "boob window" was the invention of artist Wally Wood, who is more famously known for having invented the "woodie". Another version of the same costume closed up the "boob window". Not so coincidentally, the "boob window" was restored the week after DC Comics' headquarters mysteriously burned to the ground. In another version of the costume, Power Girl's cape was fastened on by two medium-sized gold buttons. This was later replaced by a single ginormous gold button by artist Chic Young, the inventor of Dagwood Bumstead.

In more recent years, Power Girl has taken a more proud and playful approach to her powerful chest, much to the chagrin of the more modestly-endowed (and deeply jealous) Supergirl. At one point, in perhaps the most long-anticipated (as in "It's so obvious, why the hell hasn't somebody done this idea before now?") story in DC's history, Red Kryptonite turned the already busty blonde super-big-boobed, giving her blimp-sized breasts. Shortly thereafter, Supergirl attempted suicide.