Two-face is a disgruntled teenage alien that refuses to accept that half his face is human. He tries to numb the pain by consistently playing with human currency, and harassing grown men that: a) dress in expensive skin tight materials, b) run wild in the city, c) excessively buy useless gadgets, and d) dress in expensive skin tight materials. (The easy target) His real name is Aaar-vHi Deehnt on his home planet, but humans are inconsiderate assholes and therefore make no effort to learn new alien languages, so on earth he is known as Harvey Dent. 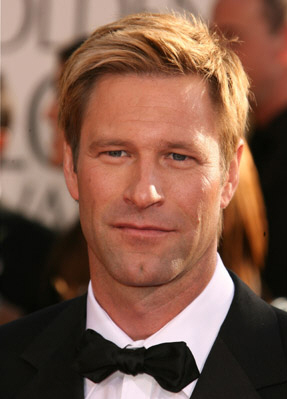 Aaar-vHi before run in with Corey Hart.

Aaar-vHi was created in what would appear on earth, to be a front loading dryer. Although we know Aaar-vHi's planet is in proximity to Vulcan and Dimension X, we can not be sure exactly where the planet is. For this reason, we have not a clue in hell how or why Aaar-vHi was created in a front loading dryer, and we can't ask. Perhaps this explains, though, why Aaar-vHi is constantly doing cartwheels and washing everyone's laundry. Anyway, when Aaar-vHi was in middle school, he excelled in human study. He enjoyed greatly learning of Rick James' juicy curl and even wrote a paper on the physics of moonwalking. It is also said that he Rocked the Casbah on occasion, and wasn't opposed to more cowbell. However, when it came to the pirate unit of human study, things changed for the worse. In the Pirate's Manual, which Aaar-vHi was instructed to read, there was selected content that caused the other front-loading-dryer-children to mock and tease him. The following passage from the Pirate's manual illustrates the reason:

If you really want to be a pirate, I guess you have to say "Aaaargg" a lot. This one time at Halloween, I dressed up like a pirate and it was pretty good I guess, but it's hard to do that kind of thing without feeling like a goddam phony half the time. I had this friend that dressed up like a coconut. That killed me. Ole' Bobby Brown was always doing that kind of thing. Anyway, if you want to be a Pirate, you have to say "Aaarggg" a lot. Sometimes it even gets you a girl that really knocks you out.

In case you didn't notice, the Pirate's Manual was written by JD Salinger, it really was. The manual is phony as hell, but it is actually still used today in most english classes both on Aaar-vHi's planet and earth. Aaar-vHi had a hard time throughout that year, because no one forgot that the first half of his name so closely resembled the mating call of the modern Pirate. They would run around him in circles and yell "AAARRRR Polly wants a cracker" or "AAARRRRR where be the treasure" or any other cliched Pirate phrase that they could come up with. At this point, Aaar-vHi knew that it was time to travel to the place of teh internets so that he could assimilate his being in the glories of earth. At age 13, he took the Lead Zeppelin to earth, paying a decently priced fare. It should also be mentioned that this is the beginning of his general resentment toward Pirates, and people in general, generally.

When Aaar-vHi arrived on Earth, he landed in Chicago which made him believe that there was some mistake because the city looked the same as his home planet. Litter everywhere, bats, purple trees suspended in space, it was all the same. After wandering around for an indefinite amount of time, he came to a person that talked in a different language, English. Aaar-vHi stepped on the person's foot, and the human went ahead and yelled at his face, which prompted him to learn English so that he could clear up the matters that the person was talking about involving his mother and his intelligence. Because he had previously excelled at human studies, he understood and could use the language in three seconds. The process is much the same as a person that hears a Lady Gaga song and within three seconds determines that it is complete shit. Now Aaar-vHi's attitude toward the situation was bittersweet. He was ecstatic that he had made it to earth, yet sad that the stranger claimed to have had relations with his mother. To sooth his sadness, he decided to go all entrepreneur on earth's ass and created the chain of restaurants, Harvey's. With this move, he gained some popularity with earth creatures, (aka. humans) and began to party heavily, which eventually led to the incident that got him the title "Two-Face." 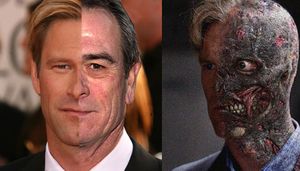 Aaar-vHi in his dreams (left) His good half (right)

The Accident that Caused it All[edit]

As Harvey's became more and more successful, people wanted to party with Aaar-vHi. (now "Harv-Dude") Aaar-vHi took to partying day and night, rain, shine or nuclear radiation so that he could please everyone, including a young Corey Hart. The incident happened on March 10th, 1975. Led Zeppelin (who Aaar-vHi had taken a liking to because of his method of transportation to earth, and also because everyone else liked The Zep) had just released their badass album Physical Graffiti. The lights were flashing. Kashmir was at the 4:25 mark. People and Aaar-vHi were bobbing their heads with an urgency. Corey Hart was wearing his sunglasses. It was night. Suddenly, the awesome power of-

Did you know that on Physical Graffiti, the song "Boogie with Stu" is credited to Ritchie Valens' mother's wig?

Anyway. The awesome power of the seamlessly strung together instruments in the song sent everyone headlong into a head-bobbing frenzy. It was going so hardcore that everyone subsequently lost all control. Aaar-vHi was head bobbing and so was Corey Hart, with his sunglasses. They were unaware of the shrinking gap between them. Before they knew it, they bobbed into each other with such force that half of Corey's face actually stuck to Aaar-vHi. After the incident, Aaar-vHi immediately ended the party, listened to the remaining seventeen minutes of Kashmir, and then tried with all the power within him to recover the half of his face. He liked humans, but he did not want to look like one. He refused to be a now 15 year old alien that looked half human. You love dogs, but that doesn't mean you want half a dog face. He also didn't want to look like an asshole that doesn't care about alien languages. (Curiously enough, the half of Hart's face that was lost grew back. When asked about it, he replied, "I'm just a boy in the box." After that, people left him alone on the subject)

Aaar-vHi consulted with many different professionals about his problem. He went to the most critically acclaimed and intelligent doctor on earth; Dr. Oz. Unfortunately Oz couldn't help him, he only said, "just be glad you didn't merge with Christian Slater, if you had you would have multiple foreheads." It was of little help. Aaar-vHi tried many things, such as CLR and even the infamous Shamwow. Nothing worked. Once Aaar-vHi realised that he was destined to remain half human looking, he sold his chain of restaurants, which were re-named "Heart-Attack Factory" and he used the money to buy a two-headed coin and a Snuggie made completely of Gold. In this time he ate ice cream with Thai sauce and watched re-runs of The A-Team, Baywatch, and The Smurfs. Shockingly, during all of this he was warm because of the Snuggie. He did this for almost a full year. The snuggie only cost him $9.99. What a steal.

It is common knowledge here on earth that if one is feeling down because of something that is beyond one's control and it creates interminable wrath, it is perfectly acceptable to subject an innocent someone to said wrath. Aaar-vHi realised that this is what he must do in order to make himself happy. He concluded that ice cream and Mr. T only got someone so far. He set out on a winter morning to find a person that was worthy of his wrath. He walked by many candidates, and at each one he called heads or tails to decide whether or not it was a good idea to use this person with his new coin. The coin denied Angelina Jolie, Mr. Rogers, Barney, a ringmaster, and Princess Zelda. Aaar-vHi called "tails" each time. This clearly illustrates his common sense, or lack thereof, because the coin was two-headed. Perhaps it was the result of destiny's intervention in Aaar-vHi's subconscious, but it's more likely that he is a moron. He was about ready to give up, when he stopped in a dark alley to unpack the pic nic that he had brought with him. He was about to indulge in a world class sandwitch, with ingredients from the Sahara Desert and Desperate Housewives, when he saw it. Batman was sitting in a Dumpster. Aaar-vHi took one look at The Bat, and knew. He didn't even flip his coin. He knew that his one and only worthy adversary had to be a guy that sat in the dumpster in such fabulous attire.

Why was Batman in The Dumpster?[edit]

Aaar-vHi thought at first that dumpster-diving was some type of fetish that both he and Batman shared, but he was mistaken. As it turned out, Batman was trying to hide from Aaar-vHi because half of him looked suspiciously like Corey Hart. It is a little known fact that Batman has Coreyhartphobia, the fear of Corey Hart. Aaar-vHi explained with patience the story of how he had come to be this way, and he coaxed Batman out of the Dumpster. The best way to describe Batman's reaction to the story is with the use of a popular internet acronym, "LOL." This was the final straw. From this point on, Aaar-vHi was a bitter teenager that hated the world, escpecially his mortal enemy. He stormed from the alley with a new found mission to destroy lots of people, Batman, and to buy a few Rage Against the Machine and Nirvana albums to illustrate his teenage angst. He was partial to "Smells like Teen Spirit" and "Testify." Because it was 1976, he had to borrow a time machine from H G Wells to go forward in time to get the music, but he didn't mind because he hated the world and needed everyone to know it.

Aaar-vHi identified the fact that he needed a new name to fit his new persona of being a vessel of hatred, so he googled some sweet ass nicknames and came up with Two-Face. He initially had trouble deciding between Kittehluv89 and Two-face, so he went on Omegle to ask anonymous people what they thought. They figured that Two-Face matched his personality better, so he went with that. Aaar-vHi had to re-use the time machine for this, but Wells is a good guy so he didn't mind.

Thus, the beginning of Two-Face.

What do we learn from analysing Aaar-vHi's struggle as a teenager?[edit]

-Kashmir is a dish best served with a lot of extra space and some discretion. And salt.

-The secret of regeneration lies within Corey Hart.

-The "Pirate's Manual" is a must-read.