NO, YO MOMMA SO FAT, SHE USES A WHALE AS HER WATER BED.

NAH HAH, YO MOMMA SO SKINNY, SHE CAN CRAWL HER WAY OUT OF THE SHEET OF PAPER.

A mother is a person who creates children for a living, much like how a Britney Spears invents farts for a living. Most professional mothers are often gay-looking, naggy, middle-aged and stupid - as they lead a stressful life competing in the flying-retard market with the ever popular butterflyers, the blood-sucking mosquitoers and the backstabbing boyers.

Mothers are also well known for their unfortunate habit of dispensing unnecessary advice on any given topic due to a disease to people under the age of 30. Thus, the government has enacted the "Beware-of-Mother Act of 2005" to protect this workforce as their union threatened them with more advice. 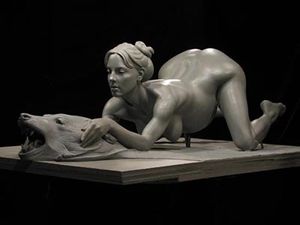 Behold the power of pregos. Don't you wish giving birth was so simple? She's kinda hot though.

The mother of teens are overprotective cunts and pieces of shit. They bitch and moan all the time and get pissed at random times. They constantly fail at any logical argument put forth to them, particularly because their minds have rotted away. This usually happens during the mother (of toddlers) stage. Similar to mothers of toddlers, mothers of teens tend to reorganize the inventory of their teens to ensure that no harmful substances are found. They are nerds and they sound like idiots when they lecture you. In an attempt to justify their bitching, they state that it is due to their caring for the offspring, which is total bullshit. The truth is, they have no life. Stay away.

Mother is also a disease that women get in pregnancies. It is a virus that settles in the vagina area and then heads for the brain and causes damage that can't be repaired unless the other irritating virus called "child" is eliminated . The symptoms are a huge desire to control their children and force them to do ridiculous things and feel guilty in all of their behaviours that shows signs of fun.

For those without comedic tastes, the so-called experts at Wikipedia have an article about Mother (Energy Drink).

The energy drink known as Mother is not dissimilar in taste to regurgitated orange juice with a slight dash of battery acid. It thinks it is grown up, and thinks it can hang with the cool energy drinks.If you drink this then actors dressed as brides will not chase after you. Unfortunately, it just makes a huge penis of itself and fails miserably in the process. DO NOT drink mother as it will induce both insanity and regurgitation of the spleen, in addition to an aftertaste rather like that produced by diluted biro ink.

Mother can also be the short-form of M*therfucker. For more details, see the article on Mother Fucker.

If you use the ice bombs and break through the glass should should be okay. Samus Aran gets totally naked if you do.