Daffy Duck was a convicted sex offender, good friend of Bill Clinton, actor and pylon enthusiast who sparked one of American Television's biggest scandals after he gained a leading role in the film short franchise Looney Tunes (1931-97), and is Donald Duck's long lost cousin. Mr Duck, who stands at 5"3' has an incredible waist diameter of 72', is female/male mix (a little known fact), black in color and has noticeable yellow face markings, possibly as a result of his involvement with the 1984 Midland and West Sperm Bank Explosion.

Daffy Duck began life after he was prematurely born from the loins of your Mom after she forgot her protection. Again. Daffy attended Washington's Academic School for the Special and Needy after he managed to score a minus number on an early online IQ test, the second to lowest score ever landed by an organism under 5 months, being narrowly undercut by Mr Bean. After this early set back Daffy discovered his true talent; molesting children acting. He performed his debut play at the Bijoux Theatre, a play named Ahnuss Rhammar: The Musical in which he famously portrayed a deceived Rhammar. After this fantastic debut Daffy's child acting career really took off, he starred in many a cabaret performances, and, slightly more alarmingly, he is thought to have picked up his 'tendencies' from co-star Brad Pitt, who played alongside him in many plays. Daffy's next big break was playing the protagonist, Master Bei-Shun, in the hit drama T4 rides a Bitch: Dramatized Version. Once Daffy had reached 16 he left Washington's Academic School for the Special and Needy and continued in striving forward into the drama world. 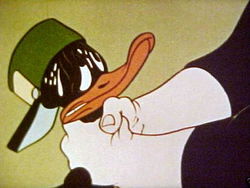 Mr Duck first came to police attention in 1979 when he sexually assaulted long term rival Bugs Bunny with a wooden phallice,a rubber banana,and a picture of Justin Beiber landing him with a four month prison sentence and probation for a year. Mr Duck, whilst under probation supervision, managed to lure a young Chick into his nest, whereupon he did many things which have been documented by the BBC in a special 'one off' bestiality porno. This led Mr Duck into another prison sentence, this time lasting 10 years, with a lifetime ban with working with infants, the judge was particularly unimpressed with the fact Daffy Duck's main defense was he had chronic ED, theoretically protecting him from such accusations. However, this defense was quickly discounted after it was discovered Ducks actually have a gland rather than a penis, a trait shared with Justin Beiber and George Clooney. 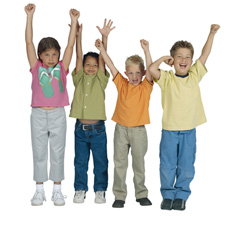 Children celebrating after the arrest of Daffy Duck.

This was what is now known as the single biggest scandal in American TV history. In the late 1930's Mr Duck applied for a job acting in a TV series designated just for children and retarded adults. His past was not known to the producers of the series and so he was given the job. Mr Duck used his privileged position to create subliminal messages during filming which, once decoded, read out 'I'll have you in my nest, I have a tube full of cream just for you!'. Thousands of children, with help from their unwitting parent's were led into his nest, where other things which could only be written about on Encyclopedia Dramatica happened.

Whilst serving his sentence in prison Mr Duck was attacked, maimed and killed by a vigilante known only by the secretive vigilante name of 'Gordon Brown' in an attack now known as the 'Duck Death Disaster'. This man has never been found, but it is rumored he now holds a high position in the British Government (he has since been ousted from the post by his own people). Much media fallout resulted, with a memorial to Daffy being erected in Washington, DC. The memorial was soon vandalized by The Taco Bell Chihuahua who was angry at the use of his/her quotations praising the acting skills of Duck which had been inscribed on the memorial without his/her knowledge. It was rumored that his rival Donald Duck had something to do with Daffy Duck's death to this day. Again, nothing is confirmed about Daffy's death to this day.

Could this be the killer of Daffy Duck?

Some guys have saw Daffy Duck alive and they were shocked very much as they didn't give the Federal Bureau enough details. It is also rumored that Daffy is working now against Disney teamed up with a disaster badass CIA retiree Agent Bunny Bond and they both are gonna take down that Disney World and dispatch them for good. According to Daffy as previously he commented before his "death" that Disneyland is fouling up little children's brains.