From Uncyclopedia, the content-free encyclopedia
(Redirected from Retarded)
Jump to navigation Jump to search

The R-word is undoubtedly an ableist slur and should never be part of someone's dictionary. It is a harmful slur, used by "normal people" to target mentally disabled people, such as those with autism, Down's syndrome, Tourette's syndrome, obsessive compulsive disorder, and the like. It is just as horrible to say as the N-word, F-slur, and T-slur, so spread the word to end the word! 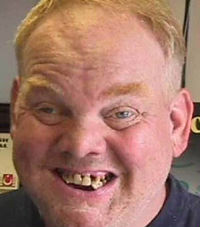 I hacked your webcam, it's you!

Now that the 15 year old Twitter girls are gone... Let me explain why retard is among the best words in the English language. First off, it just sounds so silly, how would hearing ree-tard not make you chuckle at least a little? Secondly, it describes you. Yes you, <insert name here>, you goddamn cross-eyed fuck. Look at you. So gullible, so naive, so lost in this big world, and this grocery store aisle. You look so retarded asking the store employee where the lube is as you stand right in from of it. How embarrassing? All I can say is, be glad <insert name here>. Embrace your retardation, it defines you well.

What exactly makes me a retard?[edit] 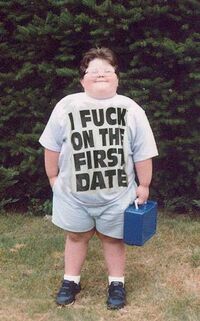 Lies, you clearly don't even get fucked.

Well son, while it primarily is your oblivion to your surroundings, the fact that you're just a genuine embarrassment to be around and the stunts that you try to perform as if you were actually cool (which you are not, and you're just a dumb nerd) also is a huge factor. Remember that time you tried to impress that cute girl, your crush, at that party last year? You tried to tell her a joke, but it sounded more like:

Her: Cringes, walks away

Wow! That was SO embarrassing! You clearly looked retarded there, clueless about what the outcome would be. You looked so ashamed when she walked away. You could have flirted, perhaps offered her a drink, maybe even a ride to your place... but nope. You fucked up, big time. As we laughed at you, we had to pretend that we were laughing with you and had to call your joke hilarious, despite the fact we were laughing AT you and your joke (if you can even call it that) was clearly NOT hilarious. That then, was a certified retard moment. You looked so retarded sitting on the couch pretending to have a good time bobbing your head to the music with nobody as everyone danced, got high and drunk, and made out with each other having a good time. Don't worry, <insert name here>, there's still that fat blonde bitch named Peggy that likes puppies and kittens, as seen by her retarded shirt swag-ass drip. 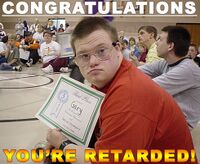 What do you mean "what do I get?" It's obvious! You're such a retard that you didn't even know!? Shocker! You win the title of being a retard, that's about it. Fear not, however, as it is quite special! While us, your fake friends that hate being seen with you loyal friends that LOVE being seen with you, have hot girlfriends, nice cars, and a great life, you get to flex your even better prize: your own title of being the one and only RETARD! World famous! Absolutely not consolatory and very much well deserved for your hard work and contributions to society!