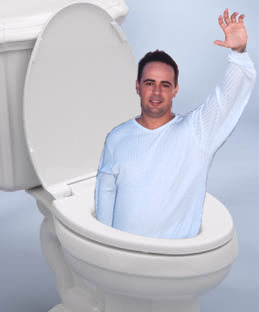 Actor's interpretation of the "shitted" person in such an equation
Whoops! Maybe you were looking for Feces?

The Shit A Shitter Paradox refers to a series of phenomena in which, more or less, a human being physically defecates in the form of another, wholly intact human being. There are several variations on the idea, but this is the standard for discussions and studies on the topic.

The main idea is that to shit a shitter a human would literally have to excrete another human as solid waste. Most implications of this idea hold that the defecated person must remain wholly intact and fully functional as a human being, the most important of such functions being the ability to also defecate on their own. Shitting a shitter is not necessarily declared immediately upon release of the person, as the released person must first also defecate in order to be properly labeled "a shitter". The speculation in this area of the field of study has led to the scientific slang phrase, "shit a bull-shitter", used to describe a person who shits another person, but either in the form of traditional solid waste, or in an otherwise physiologically deficient form. The second shitter can shit in any form they so pleases, as solid waste in general is the only requirement to be classified as a shitter.

It is for these and several other reasons that the phrase "you can't shit a shitter" was coined. (To this day, there are no recorded cases.)

Quite obviously, humans are not the only living organisms who defecate. In fact, almost all beings release waste from their bodies in some form or another. For this reason, a person who shits any particular organism that also shits, could be labeled as "shitting a shitter". Beyond this, any organism could also theoretically be the one shitting the second shitter. Therefore, a human's shitting an octopus should be given the same consideration as an axolotl's shitting a giraffe.

Several experiments have been conducted in this field, in which a human will eat an ant or similarly tiny creature, and try to pass it through their digestive system without destroying it. While feasible, the presence of several things that ants don't particularly like (such as flesh-melting stomach acid) makes the human digestive system a less-than-accommodating area of application for purposes of the study.

To make things more fun and interesting, other than the above mentioned experiments, most scientists believe the "human-shitting-a-human" area of the field is still the only one worth studying. Also because nobody gives a shit about ants.

Several efforts have been made in an attempt to combat these issues that prevent proper observation of whether or not the paradox can in fact manifest itself. Attempts at simulating a non-biased environment in which only the shitting process need happen for setup of the observance have most often ended in an overwhelming amount of failure. Included among these efforts has been the 1942 attempt by Romanian scientist Pappar Tuleski to remove a man's entire digestive system and replace it with a simple tube, connecting his mouth to his anus. Tuleski hoped that by removing the source of skin-burning acid from the test environment, the participant being shit out in the equation would not die halfway through the digestion process. This was a brilliant idea in theory, but in practice, the man whose organs were removed for the experiment unfortunately died immediately upon his cecum's coming into contact with the ice cream scoop being used in the procedure. Tuleski was promptly incarcerated, and later became a successful medical malpractice attorney.

Other attempts to properly observe this elusive hypothetical phenomenon have yielded similar results (though much less untimely demise). The most common of these experiments included a process called "double-reverse digestion", in which the person whose job it would be to be shat out in the study would be violently crammed up through the shitter's anus, in hope that they could be forced into the colon, to be shit out once more, having foregone the more dangerous parts of the digestion process. On the rare occasion that a human being would actually fit into another human's colon, they usually suffocated to death, and/or went stir-crazy, fighting their way out of the shitter's body by ripping them apart from the inside out. Occurrences like these are one of the main reasons that scientists are no longer permitted government grants for research into fields of this nature, except in Germany, wherein the entire country's federal revenue has become converted for use by various foundations (known to Germans as charities) throughout the nation that exist for the sole purpose of investigating this specific field of study.

The purest form of the Shit A Shitter Paradox is one in which an infinite circle of recursion occurs. This would be caused by the person whom is being shit out, shitting out the person who shit him out in the first place. In other words, "Shitter 1" would be shitting "Shitter 2", who in turn would be shitting "Shitter 1". This is perhaps the only aspect of the paradox that truly makes it a paradox, as this type of feat is 100% impossible, being that something cannot be contained in something else that is contained within its own self. 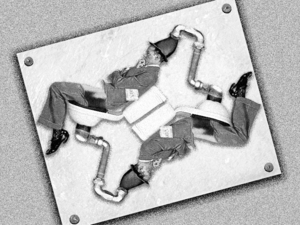 M. C. Escher, while more well known for Drawing Hands, created his own take on the paradox in the late 1940s, aptly entitled Shitting Shitters.

For those without comedic tastes, the so-called experts at Wikipedia have an article about articles.