A prime number is a number that is not divisible by 1 or itself.

Hey kids! I'm a Prime Number and I'm here today to tell you why I'm so great. You'll learn all about me and my extra-cool friends: what makes us special, what you can do with us, and why you should remember us years from now when you've forgotten everything else you ever learned in math class besides basic addition and subtraction.

When you get right down to it kids, there's just one thing that makes us Prime Numbers special: the fact that we cannot be divided into whole numbers by dividing into ourselves, or the number one. That's it. It's something all the other loser (I mean, non-prime) numbers can't do. Booo-yah. There are lots of other Prime Numbers, but we aren't all-inclusive: 2, 3, 5, 7, 13... and after that, I forget. But we really are special.

Prime Numbers Are So Special, It Takes Special People to Remember Us[edit] 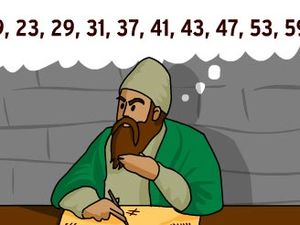 It takes special people like this to find Prime Numbers.

You ever see that movie "Rainman" about that retard (I think they called him an "Idiot Savant")? It takes special people like him to recognize special numbers like us Prime Numbers. That's because there's no rhyme or reason to figuring out which numbers are prime. There's no secret formula. There's no "Prime Number Button" on your fancy TI-85 calculator. You either have to memorize us, or you have to be really special and just be able to "know" us when you see us. There are lots of numbers that sound like they would be Prime Numbers, but aren't (yeah, I'm talking to you, 147). To be known as a part of this special club, you got to have the special people out there doing the recognizing.

Prime Numbers Are So Special, They Can Even Be Even Numbers[edit]

What You Can Do with Prime Numbers[edit]

There are lots of things you can do with Prime Numbers. Add us, subtract us, multiply us - when it comes to these things, we are just like normal, everyday numbers. Just don't try to divide us by any number other than one or ourselves, and expect to get a whole number as an answer! That is one thing we Prime Numbers just won't do. Don't say I didn't warn you. I mean it. Try it, kids, and Number 13 will kick your ass.

Why You Should Remember Prime Numbers[edit]

Well, there's the obvious reason: us Prime Numbers, we got the coolest name in the Number Kingdom. You ever hear of that tough robot, Optimus Prime? Well, I'm going to let you in on a secret: he's named after us! That's right, the toughest robot in the universe is named after the coolest numbers in existence. I'm telling you kids, we are PRIME. First-rate. Top-notch. Ain't nothin' primer than prime.