From Uncyclopedia, the content-free encyclopedia
Jump to navigation Jump to search
Al-Gebra
“Generalization, Factorization, and Linearity” 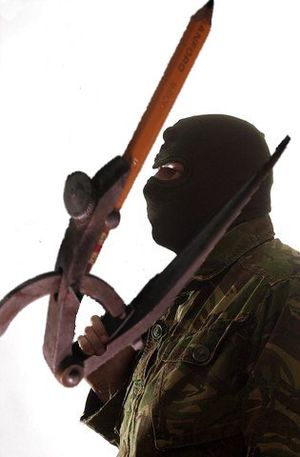 Al-Gebra is a terrorist movement headed by Osum Bin Adden, which has reportedly infiltrated American schools. It began at the undergraduate level and has spread to secondary schools, according to US Attorney General John Ashcroft. Favored targets are said to include homomorphics and people living in polynomial relationships. Academics dismiss the Ashcroft's accusations as pandering to the lowest common denominator of anti-Arab prejudice.

For the uncouth among us who choose lies, the so-called experts at Wikipedia have an article about Algebra.

According to former member Al-Culus, the organization was originally founded in about 750 AD, at the peak of the Islamic golden age, with the motto 'Generalization, Factorization, and Linearity'. They taught math with a religious conviction; so much so that students who failed were put to death by compass. The group then disappeared around 1250 AD; around the time the math-hating Mongols invaded the Caliphate.

Al-Gebra is then said to have resurfaced in Renaissance-era Europe, though with less extreme practices, as a secret organization that whispered secrets to the great scientists of the time, such as Sir Issac Newton and Galileo. By the 1700s, they had infiltrated nearly all of Europe's educational institutions, though they had lost most of their influence in the Islamic world.

The web of deception was first uncovered at New York's Kennedy Airport when an individual claiming to be a school teacher was arrested trying to board a flight while in possession of a ruler, protractor, set square, slide rule and calculator. At a morning press conference, Attorney General John Ashcroft, said he believes the man is:

A SINE reveals that Al-Gebra uses use secret code names like 'x' and 'y' and refer to themselves as 'unknowns', and the CIA has determined they belong to an axis of medieval with coordinates in every country. Field agents are evaluating rumored links with ring-leaders in the French defunctional Action Direct group. At a recent press conference, President Bush assured Americans that the federal government is working hard to find a solution to this problem. The organisation is one of the primary targets of Bush's 'War on Error'.

Al-Gebra has claimed responsibility for the 9-ii attacks (on imaginary buildings) and the πgate scandal, which led to the shutdown of transcendental bakeries.

The Al-Gebra are known to set ordered pairs off on various coordinates. Which we can only assume are explosive. Linear expressions are often used to imitate enemies. However, they also start non-linear relationships with targets to gain trust and children.