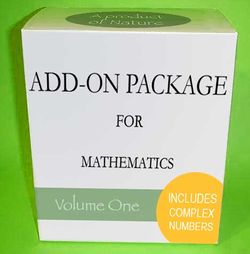 Add-on package for mathematics
“If in one hand we have an apple, and then we ask what happens if we operate on the apple through the exchange operator, then we can propose a new solution to this equation: an orange in the other hand - that is a complex number!”

~ Einstein on adding confusion to what complex numbers are

In mathematics, a complex number (also a very difficult number and made up number) is a type of number that is very difficult to define, usually because it doesn't really exist. It's just as often imaginary as it is real. You could ask the same thing about birds. What are birds? We just don't know.

Complex numbers are part of the add-on package for mathematics. In this set, the real axis has a new friend, called the imaginary axis. According to linear algebra, these make out a two-dimensional subsphere called the complex add-on package sphere ball thingy. Every point on the surface on previously mentioned whatever is defined to be a complex number, denoted by z (or a, b, ... or any other symbol, really).

Complex numbers are needed to understand Cauchy's theorem, and for interpreting exam results.

A complex number is denoted as follows:

where a is the real part of the number. The imaginary part is obviously not written out because of its imaginary state – if we were to write out the imaginary part of the number, it would obviously be real. A real number is also a complex number, but not all things are real. For example, life is complex, since it has both real and imaginary components. Note that this proves that life is not really for real, which then proves the theory that humans respawn after death. Moreover, unicorns are complex numbers for they have that imaginary horn and right behind it is that sweet, lovely, cute, adorable, little donkey that constitute the real part. The Facebook relationship status of an average day Joe and the next FB page you click on is also as complex as he states. It contains that real part (himself) and the imaginary part (his girlfriend). Anyway, complex numbers theory will sometime find the ultimate solution to the never-existed problem.

There are also real numbers that are complex. For example

is a typical very, very complex number. It can however, through hard work, pain, sweat, tears, blood and horrid death, become a real number. Complex numbers are chiefly useful because they contrast nicely with simple numbers, that are defined as numbers that are less than 100. People who study complex numbers are notable for looking down their noses at the poor uneducated simpletons who are restricted to the realtor numbers, that are useful only when selling houses.

Many practical people use complex numbers in their professional life, such as insurance salesmen, Keith Chegwin, and Delia Smith.

Complex numbers tend to crop up when one considers mathematical problems that include an element of imagination, or are very difficult. One common example is the splitting of a restaurant bill; most waiters and waitresses are trained in the use of complex numbers, at least to the point of using them for self defense.

Complex numbers were discovered by Mr Bob C. Complex, for whom they are named. Although most people credit Euler, the inventor of oil.

It has been suggested that Complex was a hack, and because he couldn't solve a simple equation, <latex>x^2+1=0</latex>, he got angry, and in a fanciful way; and for that reason, may have been the founder of complex numbers. His critical theory behind them was that they're not real, but if you think hard enough they do exist; much like fairies.

Since Pythagorus invented fruits and his wife realised that they could be added to each other to give new numbers, examples using apples and oranges have always been the best way to teach mathematics. This holds even for complex numbers.

Many substandard mathematicians think that square root of negative one is some bullshit like 'i' or something. Though that's just to confuse the newcomers and those math wizards lied to you. In reality it is just one. Yeah fucking nothing else. So you want the proof? Like a nerd think sqrt(-1) is i.

So now you see how you're scammed by mathematicians and how big of a propaganda this shit is.