For other uses, see Algebra (disambiguation).

For the uncouth among us who choose lies, the so-called experts at Wikipedia have an article about Algebra. 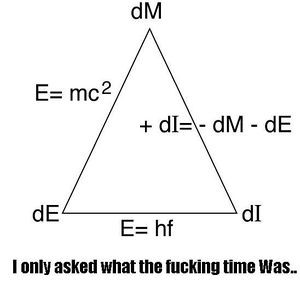 A triangle surrounded by equations, evil things that can make you less intelligent.

Algebra (from the Arabian and Persian phrase "al jabr" meaning "all gibberish") is an evil subject that puts you at risk or even in danger of dropping out. Medieval Arabs invented the evil mathematical branch on the end of 16th century[1], increasing the risk of increased dropout rate and reducing the graduation rate. However, some students can survive by solving its mysterious expressions.

Algebra is a prehistoric subject, with its roots coming from ancient Babylonians. It was probably used for sacrificial purposes.

Algebra deals with mysterious equations called algebraic expressions. Algebraic expressions are very hard to solve because letters, numbers, and symbols are present. Only attentive students (or students who do not have attention deficit disorder can solve these expressions easily. LETTERS IN MATH!? SERIOUSLY!?

Algebra, a very evil subject in the world, has many negative effects on students. However, most teachers and principals do not believe that algebra poisons students. Some students who try to solve algebraic expressions finally die because algebraic expressions do not allow them to solve. It seems to be most dangerous for 6th graders, who think that they got this whole "math" thing handled until they get slapped in the face by this abstract, arcane bullshit, and staying up late getting poisoned instead of doing productive activities such as watching Power Rangers and He-Man. It has also been used for punishing some of the world´s worst people.

Students with attention deficit disorder cannot solve any algebraic expressions anymore because they are very slow; and during the time, they will enter an unusual life as a near-death student. A near-death student tries to restore its grades, but it can't. After the near-death phase, the student finally quits school without graduating, finally emerging from his coccoon as a dropout. Scientists say that this could be the "Circle Of Life" that Simba was talking about.

When a student tries to solve an algebraic equation, that equation will demand most of the student's focus and memory, making the students forget how to breathe in the life sustaining air around them for a short time.